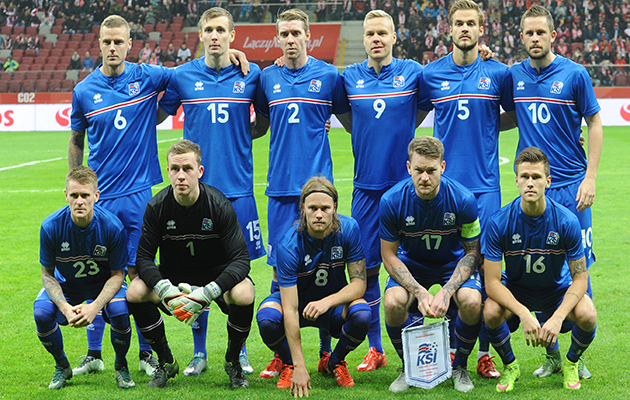 Striker Vidar Orn Kjartansson did not make the final 23 but was placed on standby. Instead midfielder Runar Mar Sigurjonsso, had not expected to be fit, was included, with Eidur Gudjohnsen listed as a forward.

In defence Sverrir Ingi Ingason, who had been injured and was not expected to be ready for the Euros, made it ahead of Solvi Ottesen.

Ogmundur Kristinsson
10/0
Hammarby (Swe)
Age 26 (19.06.89)
Not a part of the squad for the first three qualifiers, then picked as a sub and played the last qualifier against Turkey because of injury to Halldorsson.

Kari Arnason
47/2
Malmo (Swe)
Age 33 (13.10.82)
Tall and strong in the air, with good positional sense, but not the quickest. Forms a solid partnership with Sigurdsson in the heart of the defence.

Haukur Heidar Hauksson
6/0
AIK (Swe)
Age 24 (01.09.91)
Broke into the squad last year. Strong and solid, he is a good crosser of the ball but mainly focuses on the defensive side of things with the national team.

Horour Bjorgvin Magnusson
3/0
Juventus (Ita)
Age 23 (11.02.93)
Left-back who loves to attack. On loan at Cesena, he has only recently broken into the national senior squad.

Birkir Mar Saevarsson
56/0
Hammarby (Swe)
Age 31 (11.11.84)
Quick right-back who can also play in midfield and has stepped in as a centre-half. Spent seven seasons with Brann in Norway.

Ragnar Sigurdsson
54/1
Krasnodar (Rus)
Age 29 (19.06.86)
Reliable centre-back who played every minute of the qualifying phase and is a good reader of the game. Celebrates his 30th birthday a day after the game against Hungary.

Ari Freyr Skulason
37/0
OB (Den)
Age 29 (14.05.87)
Caps/goals 37/0
A winger in his younger days, plays ar left-back for the national side but as a defensive midfielder for his club. The small and quick Skulason, he likes to go forward.

Theodor Elmar Bjarnason
25/0
AGF (Den)
Age 29 (04.03.87)
Caps/goals 25/0
Started the qualifying campaign as first-choice right-back but now has to settle for a role as midfield back-up.

Eidur Smari Gudjohnsen
84/25
Molde (Nor)
Age 37 (15.09.78)
The former Chelsea and Barcelona star no longer plays a big part but still is an important piece in the jigsaw and is influential when coming off the bench.

Johann Berg Gudmundsson
45/5
Charlton Athletic (Eng)
Age 25 (27.10.90)
A quick and skilful midfielder/winger with a great left foot, he scored a hat-trick against Switzerland during the last World Cup qualifying campaign.

Aron Einar Gunnarsson
57/2
Cardiff City (Eng)
Age 27 (22.04.89)
Made captain by Lagerback when still 23. Hard working and always reliable, a defensive midfielder who holds the side together. An excellent handball player when younger.

Emil Hallfredsson
52/1
Udinese (Ita)
Age 31 (29.06.84)
The left-footed midfielder can play on either flank, or in the middle  if Sigurdsson is moved further forward.
Sverrir Ingi Ingason
5/2
Lokeren (Blg)
Age 22 (05.08.93)
Young centre-back who will be a likely reserve in France after unexpectedly recovering from inury in time.

Alfred Finnbogason
32/7
Real Sociedad (Spa)
Age 27 (01.02.89)
Skilful with an eye for goal, he scored 53 in 65 games for Dutch side Heerenveen, but has struggled since. Currently on loan to Augsburg in Germany.

Kolbeinn Sigthorsson
38/19
Nantes (Fra)
Age 26 (14.03.90)
Caps/goals 38/19
He has not scored as regularly for his club sides as the national side, but Lagerback and Hallgrímsson like his physicality and excellent work rate.

Runar Mar Sigurjonsson
9/1
Sundsvall (Swe)
Age 25 (18.06.90)
Swedish-based, his career has been disrupted by injury. A late inclusion in the squad after he proved his fitness.