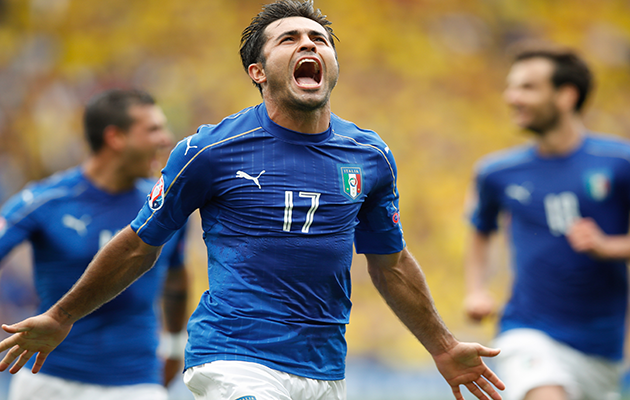 For the last week, Italian coach Antonio Conte has been trying to keep the lid on it, trying to fly well below the radar.    In the wake of Friday’s 1-0 win over Sweden, Conte can forget about that.   It is now official – an Italian bandwagon is beginning to pick up pace, with shades of Euro 2000 and Euro 2012 (beaten finallists in both competitions) coming to mind.

If Italy’s opening 2-0 win over Belgium had a leit-motive of “defend like a dragon and sting like a bee”, Friday’s 88th minute winning goal had a much more prosaic sense of the “hit and run”.   Neither Italy nor Sweden played well in a stalemate of a game in which both sides probably showed one another too much respect.

It was significant that it was only after Eder’s late winner that Sweden showed any real sense of urgent daring-do.   Until then, this disappointing game had long seemed set for a 0-0 draw.   In the end, Italo-Brazilian Eder’s goal was the only magical soccer moment of the match, as he made the most of a quickly taken throw-in by defender Giorgio Chiellini to dance by two defenders and slot it home.

This win was doubly gratifying for Conte.   For not only had his side come to these championships against a background of limited national expectations, but his insistence on picking Brazilian Eder had not met with unanimous approval.   No less than Inter and former Man City coach, Roberto Mancini set the cat among the pigeons when he publicly bemoaned Conte’s decision to call him up, arguing that the national team should be Italian.  Just because his great grandfather came from Veneto does not entitle him or anyone else to play for Italy, he argued.   Talking after the game, Conte touched both issues, saying:

“We should be very satisfied, not many would have seen us qualified afer just two games.   In the first half, some of my players were just a little nervous…against a very physical Sweden who shut down all the spaces…

“Before we came here, people were expressing their doubts about not just Eder but also about other players…But I pick players who can give us a hand.   Eder was very useful in our qualifying round and I hope he continues to be useful here…”

Called up midway through the campaign, Eder came on as a late substitute to score the equaliser in a 2-2 Euro 2016 qualifier in March 2015.   Since then, notwithstanding a disappointing end of season when he was more often on the bench than in the Inter team, Eder has been a first pick for Conte who, understandably, argues that he fulfills a “fundamental role for us”, adding:

“This group of players feels the responsibility of the Italy shirt, especially given the difficult nature of these recession times back home in Italy…We came into this tournament with our tyres a bit flat and my job has been to pump them up a bit…”

To be honest, there were moments in Friday’s game when it looked like the tyres could still do with a lot of air.   Italy were distinctly under-inspired against a workman like Sweden whose star attraction, Zlatan Ibrahimovic, was closely and effectively restrained by the BBC (Bonucci-Barzagli-Chiellini).   So much so that the much anticipated clash of the Titans between Chiellini and Ibrahimovic never really happened.

Never mind, this Italy begins to look like a real Italian team, one that can play indifferently, concede nothing and then wrap it all up with a late 1-0 win.   Already qualified for the second round, there will now be a lot of speculation as to how Conte will handle his final first round game against Ireland in Lille next Wednesday.

On Friday, he suggested that he might ring “360° worth of changes”, in other words bringing in a number of players who did not feature against either Belgium or Sweden.    Conte did add, however, that he will still want “to win that game”. Now that the bandwagon has begun to at least roll forwards, now that his side is beginning to fire on all cylinders, Conte is not the sort of guy who will choose to sit back and relax.  That bandwagon may even be about to gather pace…