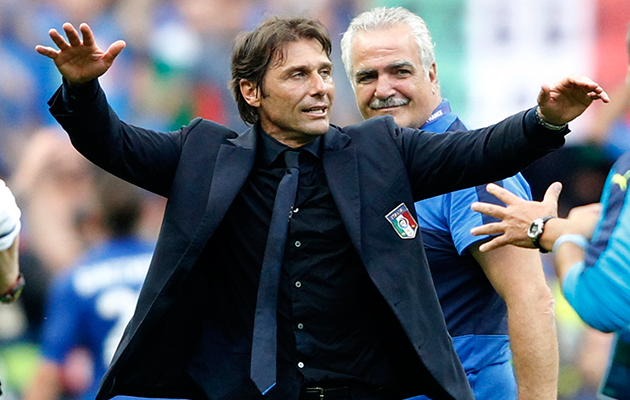 Like the best wines, Italian football often comes with a “DOC” label on the bottle (denominazione di origine controllata).  So it was last night at the Saint Denis in Paris as Italy beat Spain 2-0 in a second round game for those with a refined palate.   Antonio Conte’s Italy delivered an almost faultless performance in a match whose second half produced some wonderful football as two good teams “went for it” with panache, technique, organisation and “grinta”.

Not surprisingly, Conte was in high spirits after the game, taking your correspondent to task for all the criticism that came his way after Italy B’s 1-0 defeat against Ireland in Lille.  And that is the first point.   It might have seemed a gamble, opting to field his reserve team in the “meaningless” (for Italy) game against Ireland but it now looks like a logical masterstroke.

Against Spain, Italy looked that little bit sharper, fresher and more fluid than their meditteranean neighbours.   Physical freshness is not all, however.   At the end of the game, Barcelona’s experienced defender Gerard Pique had to admit that Italy were the better side, adding that this Spain is simply not as strong as that of the 2008-2012 golden era.   He may have a point.

What is absolutely clear about this Italy is that, no matter how much further they go (or do not go) in the tournament, coach Conte has already made his point.   Some long time ago, he concluded that if Italy were to do well at Euro 2016, he would have to form a “team” not a “selection”, a side which compensated for the lack of truly outstanding talent with organisation, work rate and above all self-belief.   (Not, mind you that guys like Eder, Bonucci, Buffon, Chiellini, Giaccherini et al do not look distinctly useful).   Conte repeated that concept in his post-match press conference, saying:

“I’ve always said that the only way for us to play here is to play like a team (read club side)…This is not an easy moment for Italian football.  We’re short of emerging talent…I’m pleased for my players, we’ve just beaten Spain, one of the strongest teams in the world and the nation should be proud of them…”

And now, next stop for Italy is Bordeaux and a quarter-final clash with current World Champions Germany.   For most countries, that would be an intimidating option.   For Italy, who tend to beat Germany in tournament football (most recently at the Euro 2012 semi-final in Warsaw), this is almost a favourable draw.   Rest assured, Germany will not be underestimating Conte’s side.   Rest assured, too, that Conte will enjoy going into this game as the underdog.   As is his way, Conte was playing a cautious game last night, making no wild promises prior to the Germany game, saying:

“You know, they beat us 4-1 in a (Munich) friendly in March, I haven’t forgotten that.   They are the strongest team in Europe…and we will be without Thiago Motta (suspended), Antonio Candreva (injured) and maybe Daniele De Rossi (also injured)…”

That is the official Conte line.   In reality he will be looking forward to yet another game where he can test his own favourite credo:

“I have not had time to think about the Germany game yet…but I tell you, in football, there is one word that never betrays you, that word is ‘work’…I will be working hard to make sure that my lads do not lose either their hunger or their thirst as we prepare for Germany…”

Conte does not tend to blow his own trumpet too much.   His outstanding results as a club coach usually do the talking for him.  Last night, however, in response to a question about the quality of the hard-assed, realpolitik Italian game, he sounded a note of defiant belief in the obvious quality of both his work and his team, saying:

“The Italians showed impeccable discipline and they were by far the more dangerous team, thus they logically qualified for the quarter-finals…This is a story as old as football itself but it continues to atonish and seduce us – Italy often ends up where you do not expect them…”

Next place where the Italians are “not expected” is Bordeaux.