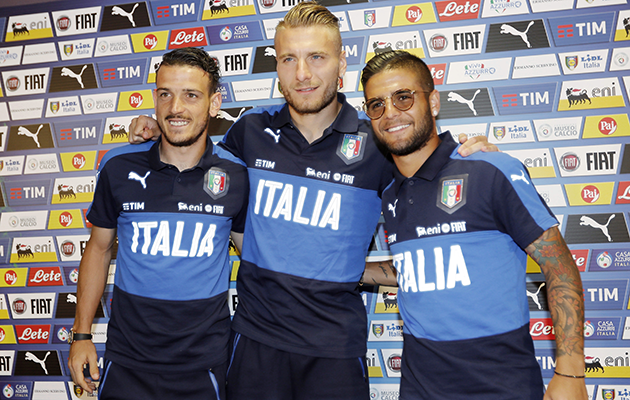 Down at “Casa Azzurri”, there is a sense that the wind is in the sails and that confidence is growing all the time.   In the wake of Italy’s impressive 2-0 defeat of Spain in their second round clash in Paris on Monday, the mood is distinctly buoyant:

“If you win a great game like that against an important side like Spain, well that’s always good for your confidence…But now we have a big match against an even stronger team (Germany) and we have just got to play against them in the way we did against Spain…”

There is no denying that, in the midst of this good moment, all Italians minds are now concentrated on another historic rivalry, that with Germany.   Given that Italy have traditionally done well against Germany in tournament games, witness the 1982 World Cup final in Madrid or the Euro 2012 semi-final in Warsaw, does this mean that Germany are now secrectly worried about facing Italy, asked one reporter:

“Their record speaks for itself…they are the current World Champions and they have won so much over the years, and that means that they have great self-belief.  By comparison, we are gaining in confidence, game after game…”

Rather than sounding worried about Saturday’s quarter final clash in Bordeaux, German striker Mario Gomez, on Wednesday was talking a big game, saying that Germany wanted to win this prestige clash and then go on to win the tournament.   Asked about  Gomez’s comments, Immobile, a player who spent a season with Borussia Dortmund in the Bundesliga, said:

“They can say what they like, we know that they’re a strong side, they’re in form…but we’ll see on the pitch how this plays out…”

As Italy go into this game, they face a series of problems.   For a start, two normal first choice players, Daniele De Rossi and Antonio Candreva, are ruled out by injury.   Secondly, midfielder Thiago Motta, the man who would have replaced De Rossi, is suspended for this game.   Thirdly, Germany have had a day extra to prepare for this game.   Are these all reasons to be worried?

“No, if you start thinking like that, you’re a loser”, replied Roma’s Alessandro Florenzi, adding:

“Those are all excuses…What matters is how we play, we are 23 players strong and we can pull off something really important.  So far, we have climbed a big mountain but now we have Everest waiting for us…”

As far as a replacement for De Rossi is concerned, it is always possible that Conte will look to midfielder Stefano Sturaro, a player who has performed more than well in a defensive role in key Champions League ties for Juventus.   With Candreva ruled out, it would seem likely that Florenzi, who started against Spain and did well on the right side of midfield, will again step in for the Lazio man.

All three players, Insigne, Immobile and Florenzi, stressed the importance of the unity, the good vibe in the squad.   That in itself leads observers to wonder if any comparison can be drawn between Conte’s team and the 1982 World Cup winning side of Enzo Bearzot, a side which came together in the face of adverse media criticism and national indifference.

Ironically, there is of course one very tangible link between the two sides because the current Italy team “director” is a certain Lele Oriali, tireless midfield worker and hero of the 1982 team.   Pounced on by the media when he appeared at Casa Azzurri on Wednesday, Oriali argued modestly that it is impossible to compare the two teams at a distance of 34 years.   He did, however, suggest that Conte has been able to create an especially close understanding with his players.

When it came to analysing the Germany tie from a tactical viewpoint, all three players were less than forthcoming, saying that they are only beginning to prepare the Germany game.  Likewise, they were reticent about another of this Italy side’s alleged secret weapons, namely their pre-match motivational routine.   Florenzi admitted that the squad does have its own pre-match ritual, adding though:

“Before the match, we do our own thing all right but there are games like Italy v Spain that do not require any motivation at all and the same will apply to our clash with Germany.   That is a game that speaks for itself and it requires no motivation…”