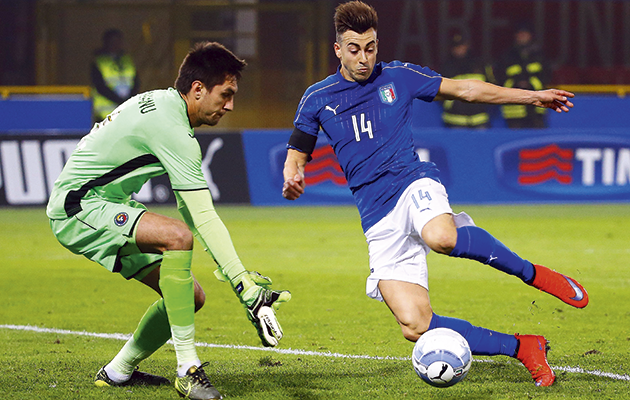 At first glance, it is not difficult to find reasons why Italy’s Euro 2016 campaign could go badly wrong.

For a start, there is the continuing decline and fall of Serie A in European club competition. This season, for the first time since 2001, no Italian club qualified for a continental quarter-final.

On top of that, the national side has bombed out in the first round of the last two World Cups, in South Africa and Brazil. And a 4-1 drubbing in a March friendly by Germany hardly augurs well, either.

Yet despite all that, Italy will be expected to give a good account of themselves in France. Two considerations justify a cautious optimism: the nature of the coach Antonio Conte, and the solid if not spectacular progress that his side has made since he took over from Cesare Prandelli in August 2014.

In putting Juventus back on top of Italian football with three successive titles, from 2011 to 2014, Conte proved himself to be not only a technically complete coach but also arguably one of the most committed and inspirational bosses on the European scene. It now remains to be seen if he can transmit that same passion and vision to the Azzurri.

His team’s qualification had a familiar look about it. Crowd problems against Croatia, underwhelming 1-0 home and away wins against Malta, and a record of seven victories and three draws from 10 games could all be called par for the Italian course. Drawn in a group with Croatia, Bulgaria, Norway, Azerbaijan and Malta, you would have expected Italy to do well. In the end, Croatia – the only team that might have caused problems – were handicapped by fan violence during a 1-1 draw in Milan and were docked a point after a swastika appeared to have been designed on the pitch in the return, also a 1-1 draw, in Split.

Much may inevitably depend on Italy’s opening game this summer, against Belgium in Lyon. In a Brussels friendly in November, Italy matched their impressive hosts for a good hour, before succumbing to a 3-1 defeat. Conte will hope that his side can sustain their effort for longer this time and head into their second game, against Sweden in Toulouse, with at least a point in the bag.

An opening defeat by Belgium would make a game against Zlatan Ibrahimovic and company look extremely intimidating. However, if Conte’s charges are still alive and running after Toulouse, they will probably feel confident of dealing with the Republic of Ireland.

Work rate, discipline and organisation count for more than individual flair in a team deprived of the Maldinis, Baggios, Del Pieros and Tottis of yesteryear.

These days the outstanding talents are men such as the Juve trio of goalkeeper Gigi Buffon and central defenders Leonardo Bonucci and Giorgio Chiellini, which leaves no space for the enigmatic talent of Mario Balotelli – who, to be fair, has played very little for Milan this season. 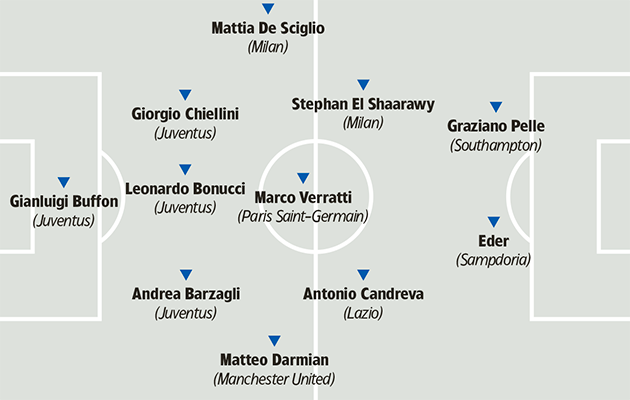 There was a time when Italy would arrive at a finals with outstanding world talent in their ranks, but the reality about Antonio Conte’s side is that, with the exception of 38-year-old keeper Gigi Buffon, he can’t call on the level of talent afforded to Azzurri coaches before him.

It says much about the Italian attack that it is likely to feature an Italo-Brazilian, Eder, who was called up during the qualifying campaign, and an apparently out-of-form central target man, Graziano Pelle, who is reportedly coming to the end of his time at Southampton.

It stands to reason, then, that what Italy may lack in outstanding individual talent will be more than compensated for by the discipline, organisation and determination that are the Conte hallmark.
Following a painful 4-1 defeat by Germany in March, he may abandon 3-4-3 and revert to a more cautious 3-5-2 or indeed the classic 4-4-2.

In the best Italian tradition, Conte’s side is built around a solid defence that relies essentially on the Juventus quartet of Buffon-Barzagli-Bonucci-Chiellini. This quartet sits tight in the centre of defence while the full-backs have licence to attack.

In midfield, Marco Verratti will step into Andrea Pirlo’s playmaking role, and alongside him will probably be Antonio Candreva on the right and Stephan El Shaarawy on the left, both in attacking roles from which to supply central target man Pelle.

If need be, Eder will drop back into midfield, leaving Pelle as the lone man up front. If, for whatever reason, Conte decides to leave out Pelle, he has at least one ready-made substitute in Juventus striker Simone Zaza, who played in five of the 10 qualifiers.

As a coach, he won promotion to Serie A with Bari and Siena before taking charge of Juve and transforming a team that had finished seventh in consecutive seasons into an all conquering machine, lifting three successive Serie A titles.

He will join Chelsea after the Euros on a three-year contract having admitted he missed day-to-day club coaching.