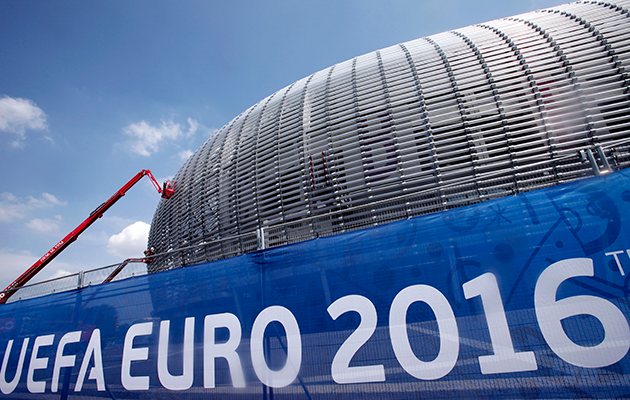 Lille is one of 200 soccer cities featured on Libero, the digital travel guide for football fans. Currently featured is a comprehensive, nine-city guide to Euro 2016. Regularly refreshed with new destinations and travelogues, Libero is a one-click treasure trove of football trip tips, tales and trivia.
See www.liberoguide.com 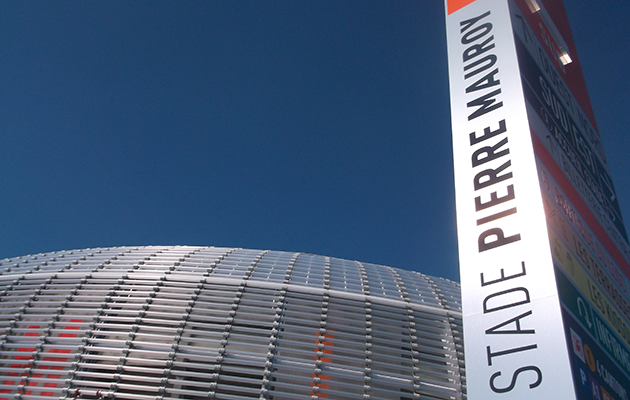 The Eurostar hub of Lille by the Belgian border is home to one of the most successful French clubs in recent years – and a new stadium, played at the futuristic Stade Pierre-Mauroy, set for Euro 2016.

This club is 2011 French champions LOSC Lille. Pierre Mauroy was the local mayor who stepped in when the City became its major shareholder in 1980.

Though modern-day LOSC were formed in 1944, their roots date back the very beginnings of the French game.

Olympique Lillois were formed in 1902, based at the Café Bellevue on Lille’s main square and playing at the Stade Victor-Boucquey on avenue de Dunkerque.

Under the helm of secretary and later president of the club and regional league Henri Jooris, Olympique headed the thriving football scene of north-east France either side of World War I.

Also prominent were Iris Club Lillois and Sporting Club Fives, based at the Stade Jules-Lemaire in the Fives area of town. Fives embraced professionalism and reached the French Cup final in 1941.

Thinking that a single national professional division would weaken his Northern League, Jooris and Olympique tried and failed to hold out for amateur status.

The Stade Victor-Boucquey was renamed after Jooris following his death in 1940. It staged one game at the 1938 World Cup, Hungary’s 2-0 win over Switzerland.

With the death in combat of their president Gabriel Caullet, Olympique amalgamated with Iris Club, and then, in 1944, Fives, to create today’s Lille Olympique Sporting Club. 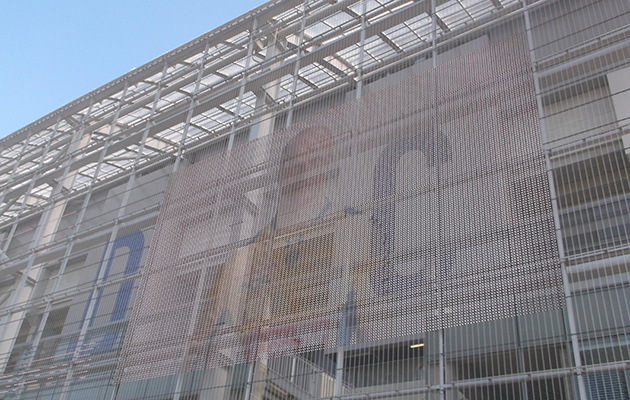 LOSC did the double in 1946 and became regular cup winners and championship challengers. Switching home games between the crumbling Stade Henri-Jooris and the former Fives home of Stade Jules-Lemaire, LOSC moved into a new stadium, the Grimonprez-Jooris, in 1975.

Close to the old Henri-Jooris and the childhood home of locally born Général de Gaulle, the Grimonprez-Jooris was unsuitable for LOSC when they qualified for the Champions League in 2001. Home games were held in Lens. A long-term solution was needed.

Film producer Michel Seydoux, club president from 2002, created a centre for training and development, and hired coach Claude Puel for the first team. In six years under Puel, Lille finished league runners-up in 2005 and made the knock-out stages of the Champions League.

In came ex-Lille midfielder Rudi Garcia. Hired as coach in 2008, Garcia was sacked in 2009 but reinstated at Seydoux’s insistence. By 2010, Belgian prodigy Eden Hazard, nurtured by Lille, debuting at 16, was ready to shine in attacking midfield. Locally born Yohan Cabaye, at LOSC at 12, was honing his dead-ball skills. Fellow midfielder Rio Mavuba, born stateless on a boat off the coast of Angola, had the drive and personal touch to captain the outfit, spearheaded by prolific Senegalese Moussa Sow and savvy Gervinho, whom Garcia would later take to Roma.

The result was the double of 2010-11, a high-scoring triumph that lifted Hazard, Cabaye, Gervinho and Garcia into the limelight. The three players left for the Premier League, Garcia later for Serie A.

Based at the sports ground of the Stadium Nord, renamed Lille Métropole, LOSC maintained a Champions League position thanks to on-loan Joe Cole. 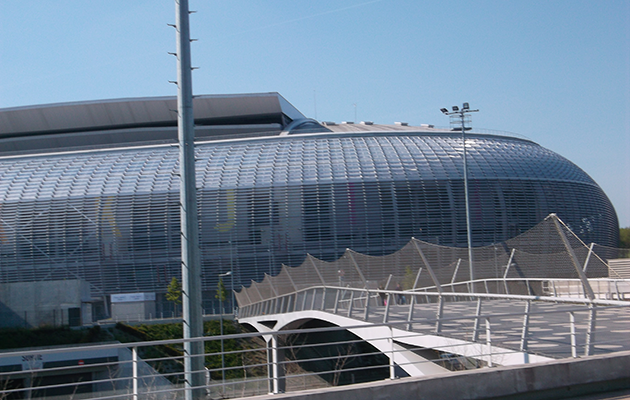 Shortly afterwards, but after a decade of debate, a new 50,000-capacity arena opened for the 2012-13 season, moving Lille onto a higher, international level.

The Stade Pierre-Mauroy shifted Lille’s football hub from the grey terraced streets north of the centre, where little changed since de Gaulle’s day, to the eastern suburb of Villeneuve d’Ascq, a contemporary complex of science and technology.

Still standing proud near the old stadium, and close to de Gaulle’s house, Au Celtique on place de St-André is a classic football bar where a century of local soccer history is revered. 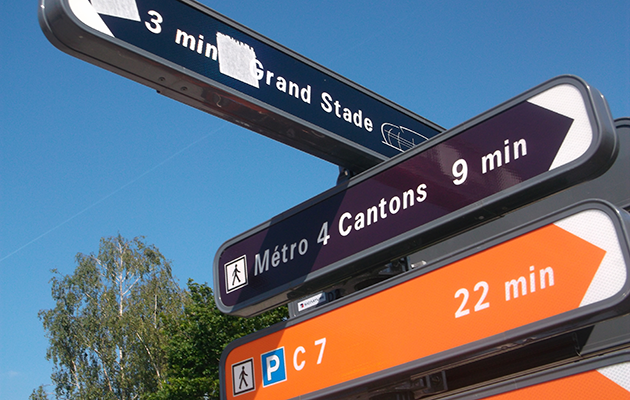 Lille Airport is at Lesquin, 7km (4.5 miles) south of the city centre. An hourly shuttle bus (single €7, return €9) connects with the Euralille commercial centre in town, journey time 20 mins. Euralille is set between the city’s two train stations, Lille Europe and Lille-Flandres, a short walk apart and close to the centre. Taxi Union (+33 3 20 06 06 06) charges around €20 from the airport into town.

Three metro stops serve the stadium, none right next door. The one named after the stadium, 4 Cantons Grand Stade, at the end of the yellow M1 line, is actually the furthest away, a leafy 12min walk through the university complex. On the same line, one stop nearer to town, Cité Scientifique Pr Gabillard is in the same wooded complex and slightly closer. Two stops away, seven from Gare Lille Flandres, Villeneuve d’Ascq Hôtel de Ville gives access to the bars and restaurants on place Salvador Allende and adjoining shopping centre. The stadium is less than 10min away. 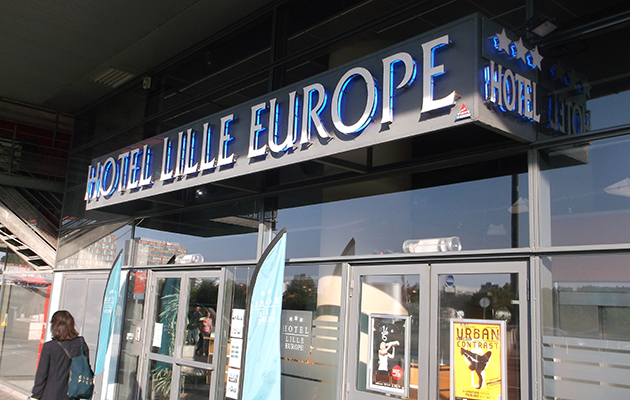 Alongside the Stade Pierre-Mauroy, in the area marked as Les Terrasses by main boulevard de Tournai, three hotels operate as ideal match-weekend getaways. The Park Inn by Radisson Lille Grand Stade is the classiest (and priciest), with a gym and conference facilities. Next door, the B&B Hotel LILLE Stade Pierre Mauroy is a functional and affordable option, while the Tulip Inn Lille Grand Stade Residences comprises 36 apartments for short- or long-term stays.

Also nearby, in the technology complex near the Cité Scientifique metro station, the Ascotel is a neat three-star. Halfway between the stadium and Villeneuve d’Ascq shopping centre/metro station, Hotel Stars is a handy budget option. 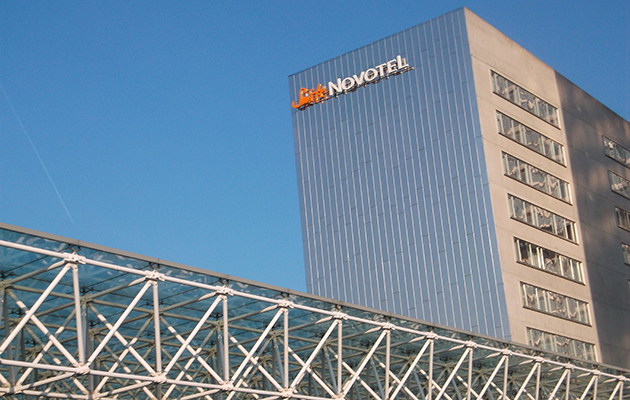 Hotels surround the city’s two train stations: the Flandre-Angleterre is one of several two-star establishments while the, nearer to the station of the same name, Lille Europe is slightly classier. Just behind, the Suite Novotel Lille Europe Hotel is a more business-friendly choice. 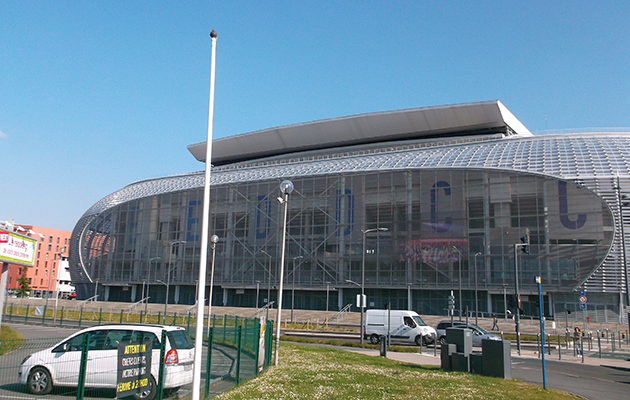 Renamed in honour of the recently departed mayor behind the project, the Stade Pierre-Mauroy was opened in August 2012.

Previously, LOSC and antecedents Olympique and Fives had played at the Stades Henri-Jooris and Jules-Lemaire, before moving into the new stadium of Grimonprez-Jooris in 1975. Proximity to Lille’s historic citadel had prevented the club from being able to expand, and debates between club, engineers, architects, historians and conservations raged for years.

During this time, LOSC moved out to the eastern suburb of Villeneuve d’Ascq, to play at a sports complex initially named the Stadium Nord. As it became obvious that the Grimonprez-Jooris would have to be demolished – a process almost as expensive as expanding it would have been – so a new arena 2km south of the Stadium Nord was planned. 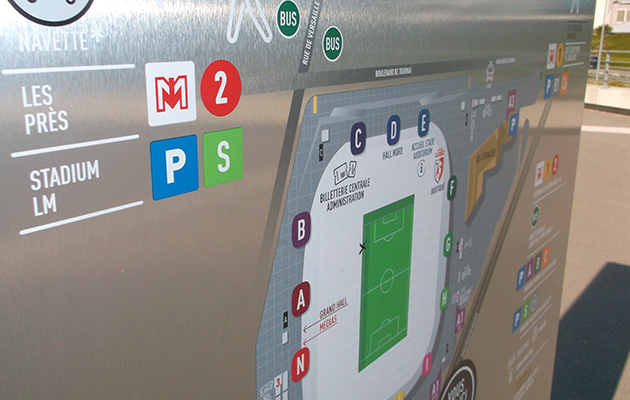 Surrounded by hotels and restaurants, the future Stade Pierre-Mauroy cost €324 million to build, €282 for the stadium, part-funded by the Metropolitan Community of Lille and regional council. Work started in September 2010 and continued for nearly two years.

An energy-saving arena of just over 50,000 capacity, with a retractable roof, the stadium immediately attracted over 30,000 season-ticket holders before its inauguration against Nancy in August 2012 – nearly twice the average crowd at the Stadium Nord the season before. Before the revamping of another Euro 2016 venue, Marseille’s Stade Vélodrome, the Stade Pierre-Mauroy was the largest club ground in France. Able to be quickly adapted to a 29,500-capacity concert arena, the stadium is laid out in two main tiers for LOSC games. 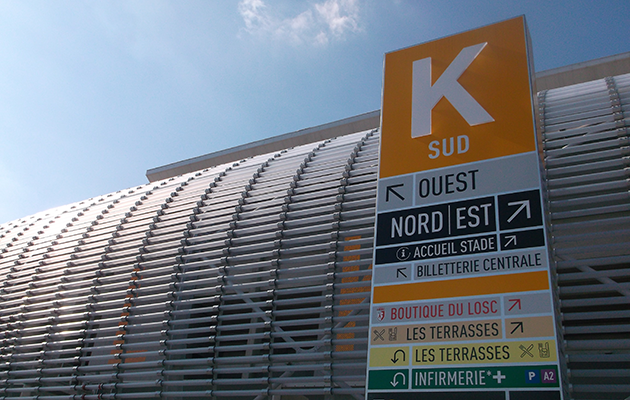 North (gates C-E) along main boulevard de Tournai and South Stands (I-L) are behind each goal, East (F-H) and West (M, N, A, B) the sidelines. For league games, away fans are allocated a sector between gates H and I, in the south-east corner of the stadium. 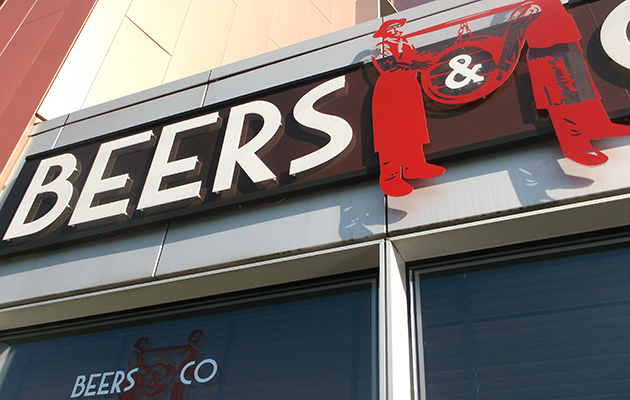 Local Flemish influence means that the city’s bars are well stocked with Belgian beers, of the lager, wheat and fruit varieties.

Of the string of outlets at Les Terrasses on the boulevard de Tournai side of the stadium, the only two bars are recommended La Regie (‘culture pub’) and the standard Beers & Co. Pub-like La Regie (featuring ‘Flairbartending’) features a big screen for football coverage. Tables are reserved pre- and post-match but you should find elbow room at the long bar counter.

The only bar close to Villeneuve d’Ascq Hôtel de Ville metro station is corner spot Le Mondrian on place Salvador Allende. Large, bare and unwittingly retro, it serves locals with cheap beers (including Pelforth) and wines, and has been known to distribute LOSC match tickets at the tabac counter at one end of the bar. 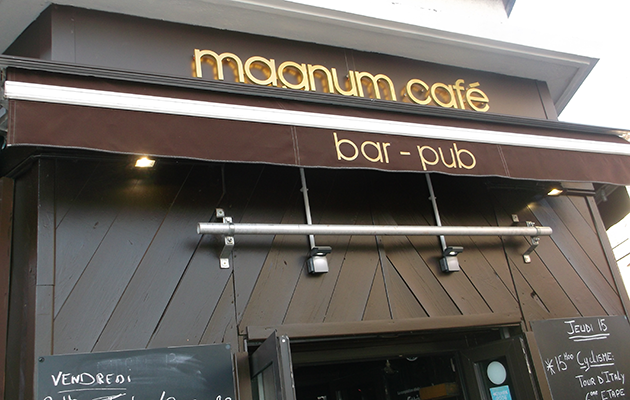 In the city centre, while terrace cafés and faux pubs abound, the main bar street is rue Masséna and offshoots. Arguably the most popular, its ever-busy terrace and blackboard of scheduled TV sports overlooking a downtown junction of streets, Magnum (No.55-57) attracts a mainly French crowd. On the same stretch, the more bar-like Shooters (No.23-25) offers TV football amid retro US decor. 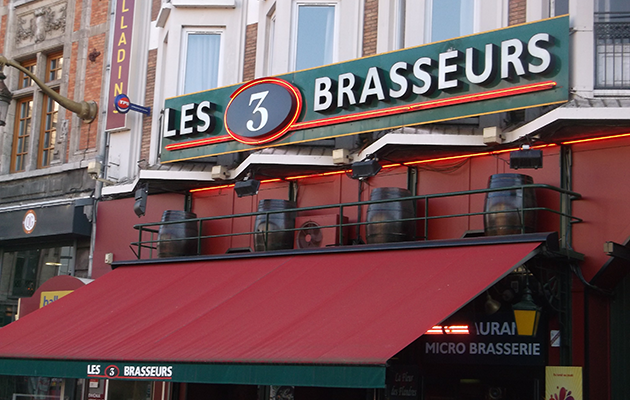 Of the many bars around the station, Les 3 Brasseurs brews its own beer.

For a real taste of local football history, Au Celtique (7 place de St-André) north of the city centre near the old stadium brims with classic memorabilia such as souvenirs from the 1948 French Cup Final and any number of scarves and signed photos. There’s a kitchen, too.