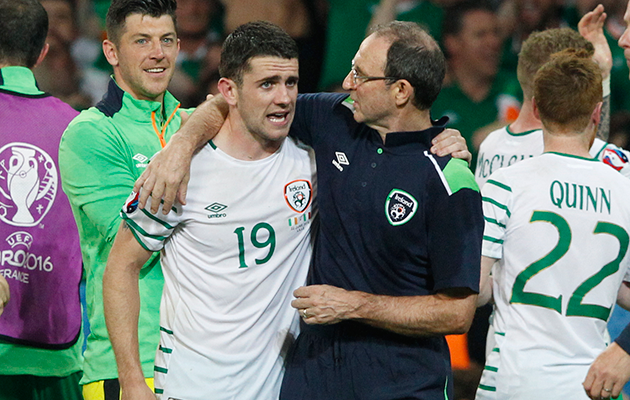 The least you could say about Martin O’Neill after his Ireland had beaten Italy 1-0 in Lille on Wednesday night is that he was a happy man.   For the former Nottingham Forest player, this was a case of a job well done, arguably his greatest ever achievment as a coach.   Asked by World Soccer if this was indeed the case, he declined to categorise the win but he did say:

“This was a great win on an incredible night, we deserved to win, we dominated the game…We thought the chance had gone but we do keep going, my players never give up…To come out of this group was a great achievement because no matter what you say Italy are no pot two team, this was a tough group.   We knew we had to win a game here to go through and we spurned that chance against Sweden, the follow up match against Belgium was not so good…so obviously I am delighted…”

O’Neill also used the occasion to defend his team, the quality of his work and to repudiate criticism of their play.  Five days ago, after that painful 3-0 defeat by Belgium, your correspondent had asked him if, in fact, the gap in class between his Irish squad and the Belgian one was not simply too much.   O’Neill touched on that theme after yesterday’s game, telling World Soccer:

“You mentioned the other day about how we are up against Belgian players of a different level and you are right… Some of our players don’t play at the highest level, so we have to neutralise some of the obvious advantages that other teams have and make ourselves feel that we belong here and that means that you have to raise your game, get back that self-confidence…”

One of the Irish heroes of this Euro 2016 so far has been Norwich man, Jeff Hendrick.  Asked if it was true that the former assistant Irish coach, Marco Tardelli, had recommended Hendrick to various Italian clubs, O’Neill used the question to “take a stone out of his shoe”, replying:

“I don’t know whether Marco Tardelli did that in relation to Hendrick but I do know that he argued that this Irish team does not play with its head…maybe tonight’s performance against his nation might have put that debate to bed, at least for a day or two…”

And now it is on to Lyon and France.   Easy, really, joked O’Neill, adding:

“I look forward to this game, it’s a great game for us, they’ll be the favourites and if we can recover in time, we will want to play as strongly as we can…”

So they will.   One French commentator who argues that this is not necessarily an easy draw for France is the former international defender Paul Le Guen.   As coach of  Oman, he has played a friendly in Dublin, telling daily, “L’Equipe”:

“This side has a natural ‘fighting spirit’ which Martin O’Neill and Roy Keane have been able to channel…They might not have the talent of the French but they have a real sense of team spirit.   If the draw had thrown up the other Ireland, Northern Ireland, I would have been certain that they could never score against us, but this Ireland is different.  They have a guy like Long, who is a good striker and who has had  a good season with Southampton…”

At this point, O’Neill’s biggest preparation problem will not be motivational, given that his team are right now on a national high.   Rather, he will have to nurse the physical energies of a team which will surely be feel the strain of Wednesday’s  monumental effort in the 23° heat of the closed roof, Lille stadium.   Has this Irish side anything left to give? 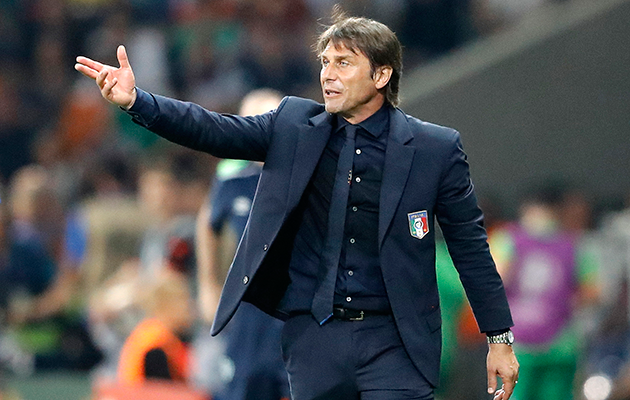 Antonio Conte tried to experiment but it backfired.

If O’Neill will have no problems in getting his side “up” for the game against France, one has to wonder what impact a poor, poor peformance will have on Antonio Conte’s Italy.   A makeshift side, featuring nine out of 11 changes from those who had started in the 1-0 defeat of Sweden, never really got into the game.

The extent to which this Italy B left the initiative to Ireland was worrying.   Of the interesting new boys, only Napoli’s Lorenzo Insigne and perhaps Juventus reserve striker Michele Zaza could be said to have passed the test.   Players like Ciro Immobile, Federico Bernardeschi and Alessandro Florenzi added little or nothing to the Azzurri cause, admittedly in the context of an overall poor performance.

Curiously, after the game, Conte did not seem like a worried man.   His attitude implied that this had been an experiment gone wrong but which will leave no lasting damage.   “Gazzetta Dello Sport” summed up the national mood with a front page headline which urged:

“Give Us Back Our Italy – The Reserve Players and Not Just The Reserves Disappoint”.

Asked by World Soccer if this defeat might have a negative psychological impact on the Italian campaign, Conte replied on that his side will be fit and ready for Spain next Monday.   It will need to be because a performance of this uninspired negative nature against Spain would spell defeat.

Italians will have to hope that this game was merely another example of one of the seemingly eternal truths of Italian football.   When nothing is at stake, Italy underperforms, end of story.   Being already qualified for the next round  before this game has given Conte a fantastic chance to rest his first squad.   Will that prove enough to wipe away this disappointing result?

As for Ireland, another monumental occasion awaits…and whoever said anything about taking revenge on France for that infamous Thierry Henry handball goal in a World Cup playoff against Ireland back in 2009.  Thierry Who?