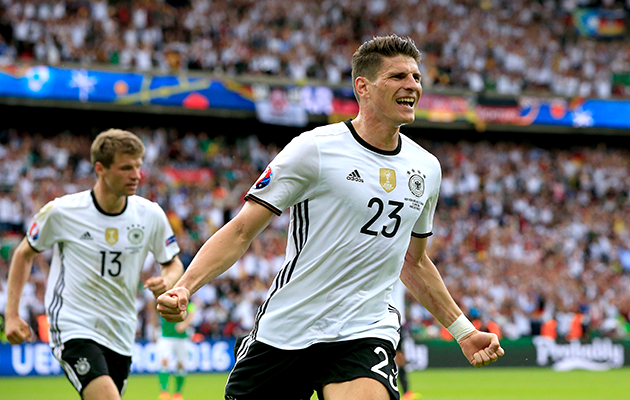 Match overview:
Germany finished top of Group C, ahead of Poland on goal difference, after Mario Gomez’s first-half goal gave them a 1-0 victory over Northern Ireland in Paris. The world champions missed several chances to build a more emphatic scoreline, but Northern Ireland rode their luck and finished third in the group, with a strong chance of reaching the round of 16.

Outnumbered but not outsung, Northern Ireland’s fans sung, “It’s just like watching Brazil.” But the early chances for Germany suggested it could easily have ended 7-1 to the world champions. But Germany, with centre-forward Mario Gomez in the starting line-up, missed a host of chances.

Key moment:
Mario Gomez’s goal, just before the half-hour, was the least Germany deserved after several excellent opportunities had been fashioned by the world champions, with Mesut Ozil and Thomas Muller outstanding, despite a packed Northern Irish defence. It was remarkable that it took so long for the world champions to open scoring, but Northern Ireland goalkeeper Michael McGovern made a series of fine saves from Muller and Mario Gotze.

Talking point:
Mario Gomez started a match for Germany for the first time this tournament, with the much-criticised Mario Gotze dropping into midfield, not the bench.

Gotze enjoyed some fortune running from deep but was wasteful in front of goal and gave away possession in key areas. He was subbed early in the second half.

Gomez had been written off many times in his career and is now playing in Turkey after spells in the Bundesliga and Serie A. Yet here he was, forcing his way back into the national team reckoning and scoring the crucial goal. However, he missed a number of other chances in the second half, a reminder of why Joachim Low had been reluctant to start him in previous matches.

Another first-time starter, Joshua Kimmich, selected in place of Benedikt Howedes at right-back, proved highly effective raiding down the right flank, with Ozil and Muller oustanding as Germany’s one-touch passing tore through Northern Ireland’s defence. But despite the chances created by Germany’s midfield, the world champions somehow missed the opportunity to boost their goal difference. In the end, the lack of further goals proved academic, as Poland’s single-goal victory over Ukraine ensured that Germany topped the group, ahead of the Poles on goal difference.