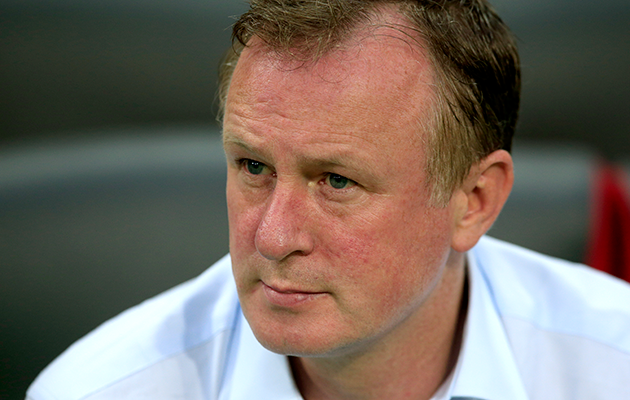 World Soccer: It was an incredible achievement to qualify without any star players. How did you do it?
Michael O’Neill: I felt we needed momentum. In the previous campaign, our performances were better than our results. We needed ways to turn the draws into wins and we needed a goalscorer as the margins in games are always fine. Kyle [Lafferty] stepped up and gave us the goals, particularly in the opening eight games of the campaign. He scored seven goals, all vitally important.

The big thing we have is a collective. Wales are a small nation but they have Bale. We don’t have that level of player, but what we do have is a strong collective. We’ve a good organisation and we’re a team that a lot of teams don’t relish playing. We have to use that as one of our strengths. That’s a psychological thing that we have to continue to develop and grow.

Are you settled on a tactical gameplan?
We’ve played about with a four or a three at the back; two up front or one up; one behind. It’s pretty much governed by player availability because I don’t have two players of equal ability or standing for every position. Sometimes the actual changes in system are forced upon me.

How big a blow is Chris Brunt’s injury?
It is a huge blow, he’s one of our Premier League players, but my job is to find a solution to that problem. It’s not the case that we have another Premier League left-back ready to step in.

Was the draw as tough as it gets?
I think it probably is, let’s be honest, but when you’re a “pot four” team… As well as Germany, Ukraine and Poland are strong teams. They have top players, particularly Lewandowski, while Ukraine have one or two really good individuals. But these are the games where we’ve consistently proven ourselves capable of getting results.

When I look back at the previous campaign [2014 World Cup], our best performances came against Russia and Portugal. We’d some great performances in qualification but we’re probably going to have to get to another level again to give us a chance to get out of the group.

Does the new format make a difference? You could go through with three draws or a single victory…
Totally, it’s a good thing. People initially thought with 24 countries qualifying, the qualification will become a formality, the big countries will qualify easily. But it didn’t prove to be that. We got our first chance of automatic qualification in the eighth game and we took it in the ninth, but in those two final games only four or five countries had qualified. Because more teams had hope for longer it gave the smaller nations hope. So many places went right to the wire.

So what is the target in France?
It would be an amazing achievement for us if we can reach the knockout stage but that’s what we have to hope to do. Only eight teams go home after the group and my aim is not to be one of those teams. We have prepared with that goal. It won’t be devastation if we don’t because we’ve already had the high of going, but that’s what we aspire to.

This will be a new experience for you and the fans…
For a whole generation this is their first tournament. If you’re under 40 you can’t have much recollection of 1986 [World Cup], you will have only been a tiny kid at that time. So it’s such an exciting thing.

Do you see parallels with Leicester?
There’s a lot. Greece were in our group and Claudio Ranieri was their coach. We beat them and he was sacked, so I can claim some responsibility! Seriously, he’s such a gentleman and there are a lot of similarities to what we’ve done. We have players from Leagues One and Two that we have elevated onto the international stage.

Leicester have done it with Vardy, they’ve found foreign players that weren’t household names and brought them in for realistic fees. It’s such a positive story. That’s what we hope to do ourselves.