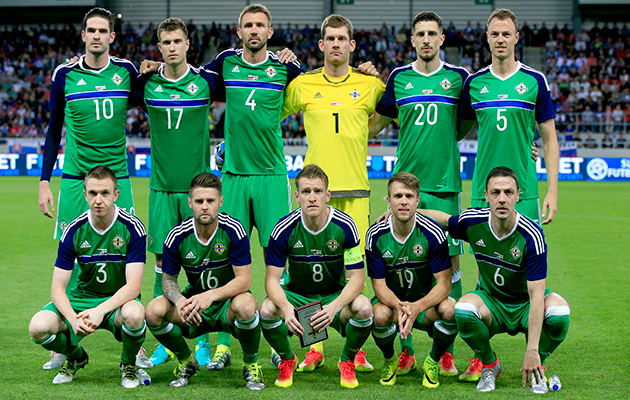 Will Grigg and Luke McCullough were the main surprises when Michael O’Neill trimmed his 28-man provisional squad down to 23. Liam Boyce, Billy McKay, Daniel Lafferty, Michael Smith and Ben Reeves were all dropped from the final party.

Grigg got the nod over Wigan team-mate Boyce while McCullough was preferred to Daniel Lafferty, who paid the price for not featuring regularly for Burnley this season.

Alan Mannus
7/0
St Johnstone (Sco)
Age 34 (19.05.82)
Canadian-born, he did did not play in any qualifiers, but his excellent form in the Scottish Premiership will likely see him used as back-up.

Michael McGovern
10/0
Hamilton Academical (Sco)
Age 31 (12.07.84)
Took over when Carroll was injured and kept his place for the final five games. Gave a superb performance in the vital home win against Greece which guaranteed automatic qualification.

Craig Cathcart
26/2
Watford (Eng)
Age 27 (06.02.89)
Central defender who is always reliable and can also play full-back on either side. A major factor in Watford’s promotion to the Premier League last year and progress in the FA Cup this term.

Jonny Evans
47/1
West Bromwich Albion (Eng)
Age 28 (03.01.88)
Plays alongside McAuley for club and cuntry, so not surprisingly they have an excellent understanding.Joined Manchester United as an 18-year-old.

Aaron Hughes
98/1
Melbourne City (Aus)
Age 36 (08.11.79)
In the twilight of a distinguished career, injury saw him miss the last six games of the campaign but O’Neill remains loyal to the former skipper.

Luke McCullough
5/0
Doncaster Rovers (Eng)
Age 22 (15.02.94)
Centre-back who has been playing regularly for Doncaster since a 2013 move from Manchester United.

Conor McLaughlin
16/0
Fleetwood Town (Eng)
Age 24 (28.07.91)
Right-back who plays in the English third tier but has proved himself at the highest level, playing in nine qualifiers. Links up well with midfielder Jamie Ward.

Stuart Dallas
12/1
Leeds United (Eng)
Age 25 (19.04.91)
Likes to take on defenders with speed and skill. Graduated from Irish League club Crusaders via Brentford and Northampton Town to Leeds in the space of three years.

Steven Davis
81/8
Southampton (Eng)
Age 31 (01.01.85)
Captain who played in every qualifier except Romania away – the side’s only defeat. A consistent performer and a big favourite of the fans.

Shane Ferguson
24/1
Millwall (Eng)
Age 24 (12.07.91)
Left winger who can also play full-back. Played in five qualifiers, three as sub, and laid on both goals in the home win against Faroe Islands.

Niall McGinn
40/2
Aberdeen (Sco)
Age 28 (20.07.87)
Right-winger who works hard and uses his pace to take on opposing defenders. Came off the bench to score against Hungary.

Kyle Lafferty
49/16
Norwich City (Eng)
Age 28 (16.09.87)
A star for his country, he played only 13 minutes for his club this season and is hoping that a loan to Birmingham City will give him some much-needed game time.

Billy McKay
11/0
Wigan Athletic (Eng)
Age 27 (22.10.88)
Currently on loan at Dundee United in Scotland, he made two qualifying appearances as dub for a total of 23 minutes.

Jamie Ward
20/2
Nottingham Forest (Eng)
Age 30 (12.05.86)
Winger who has a goalscorer’s instinct and can also play up front. Born in England but qualifies through his grandfather.

Conor Washington
2/1
QPR (Eng)
Age 24 (16.05.92) 2/1
Former postman who was born in England but qualifies through his grandmother, even though he had never been to the country before his international call-up. Made his debut in March, against Wales.