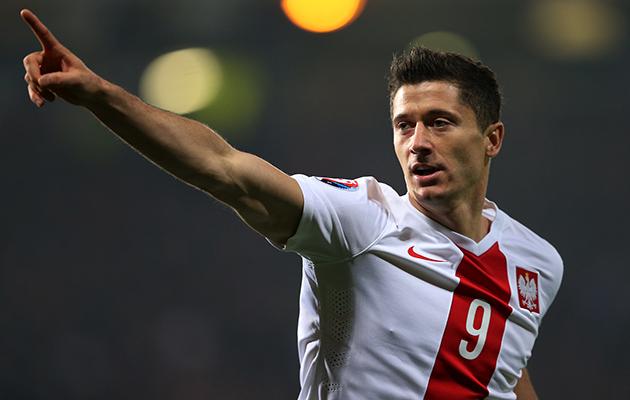 Northern Ireland’s participation at Euro 2016 ends a 30-year wait since they last played in a major tournament.

Michael O’Neill‘s side arrive on a high as they are unbeaten in 12 matches – a national record – and have not conceded a goal in 271 minutes. Nonetheless, O’Neill expects a tough encounter against Poland and against star striker Robert Lewandowski in particular.

“We expect a very tough game but we’re confident going into the competition and are looking forward to it,” he said on the eve of the clash in Nice.

“Lewandowski is in my opinion in the top two centre-forwards in the world. If you asked any club in the world, they would take him. We know the threat of [Arkadiusz] Milik and know the Polish team very well.

“Lewandowski is similar to [Zlatan] Ibrahimović in the Swedish team in that he’s a huge player, a big personality, the captain, but we have done a lot of work on the Poland team as a whole. We know their strengths and we know their weaknesses.

They face a Poland team who, according to coach Adam Nawałka, harbour hopes of achieving something in France.

“The team have developed really well so we have high hopes here in France, but this is football – anything can happen,” he said. “Still, I believe in this team as we have shown we can play well in difficult games.

“We expect a tough game. They are very strong as a team but I don’t want to go into detail. What I can assure you is that we are 100% ready for this challenge. Polish Football Association president Zbigniew Boniek told us some time ago that we shouldn’t put too much pressure on ourselves. So we decided not to win our last two last friendlies!”

This will be Poland’s third European Championships in a row. They have never progressed beyond the group stages and are yet to win a single game.

Poland winger Kamil Grosicki is a major doubt after he picked up an ankle injury in the pre-tournament friendly international against Lithuania.

His absence would be a blow as the Poles are already missing two other wide players, with Maciej Rybus and Pawel Wszolek because of injuries.

Northern Ireland’s Kyle Lafferty looks to have overcome the groin problem he suffered in training on Tuesday and is expected to start.

They have no other injury concerns, but Chris Brunt misses the tournament with a long-term knee injury.