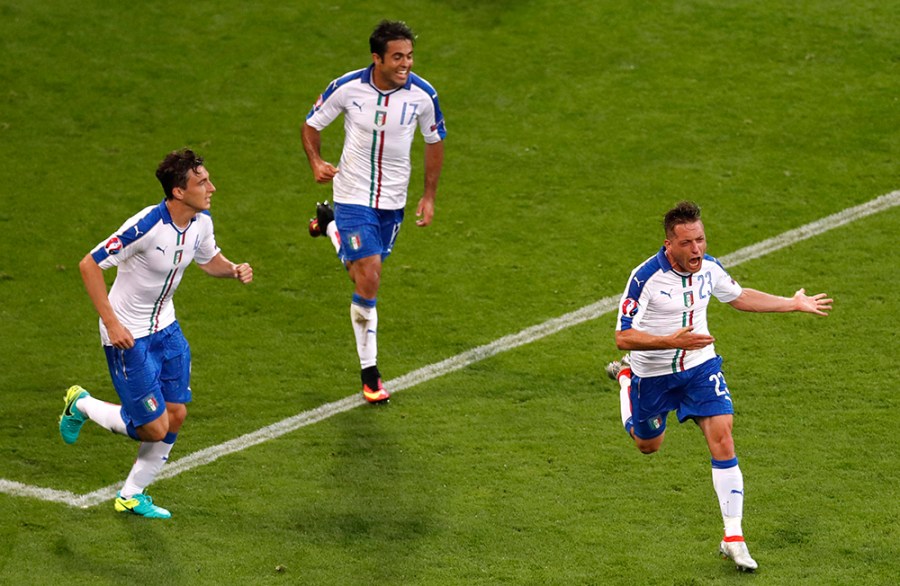 Defend like a dragon and sting like a bee. As Italy gave one of the best performances of this tournament so far in defeating Belgium 2-0 in Lyon last night, you could only conlcude that old methods are best.

Yet, this was not just dour old catenaccio but rather something of an elegant master class in the Italian minimalist approach to football. Yes, it is true that the Italians predictably pulled up the drawbridge in the face of the Belgian hordes but they did so with an excellent, organised defence. Then when they did opt to dash out from the fort, they did so with skilful and clinical efficency.

Statistics are by no means the Holy Grail, yet the match stats from last night’s game are revealing. Belgium had 55% of the possession, 18 goalscoring attempts but only two shots on target. Italy had 45% of possession, 11 goalscoring attempts with six shots on target. Moral of the fable, Belgium might have huffed and puffed but it was Italy who were the more potent moving forward.

That is not to say that this was not a classic Italian performance, in the negative sense too. The Italians picked up four yellow cards while the Belgiums received none. When it was deemed necessary to pull down a man, Leonardo Bonucci, Eder and Thiago Motta did not hesitate for a second. If he was not quite sure where the Belgium strikers were, Giorgio Chiellini blasted the ball into the grandstand. All predictable stuff.

Yet, this was also classic skilful, intelligent defending. In the end, Gigi Buffon had to make only two saves despite intensive Belgian attacking whilst his opposite number, Thibaut Courtois, had to make four. Furthermore, as Bonucci proved with that long ball to set up Emanuele Giaccherini’s 32nd minute opening goal, Italian defenders know how to use the ball.

Where do we go from here? There is little doubt but that this opening game had Italy worried. Having overcome the Belgian hurdle, logic would suggest that neither Sweden nor Ireland will prove unsurmountable.

Speaking after last night’s win, coach Antonio Conte was quick to keep things in perspective. Remember the last World Cup in Brazil, he said. We started that with a win against England but we still went out in the first round. In other words, keep your feet on the ground, son.

Likewise, when World Soccer asked Conte if this had been the best performance of his two year tenure of the Italy job, he refused to wax elegaic, saying:

“This was a good performance by us but we’ve got to keep our feet on the ground because we have a long road in front of us…I don’t know if this was our best game, certainly it was an important win against a good side and I hope now that this win will serve to increase my lads’ confidence and self-belief…”

Likewise, Conte said that to describe Italy now as one of the tournament favourites is too early. You cannot rush to judgements like that on the basis of just one game.

Even Conte though had to admit that the “chemistry” is beginning to work with his squad.

With a rock solid defence, with a midfield worker bee like Giaccherini always ready to sting, with Candreva at his best and with strikers such as Eder, Graziano Pellè, Insigne, Michele Zaza and Ciro Immobile all in their different ways with a point to make up front, clearly all is now possible for Italy.

The last word goes to Giaccherini, last night’s UEFA man of the match. Asked about Italian strengths, he grinned and said:

“Look, Belgium are not an overrated team, they have lots of very good players, the sort of guys who, one on one, can give you big problems. But mind you, I don’t have to tell you how good this Italian defence is, it’s the best in this tournament.”

And so say all of us.