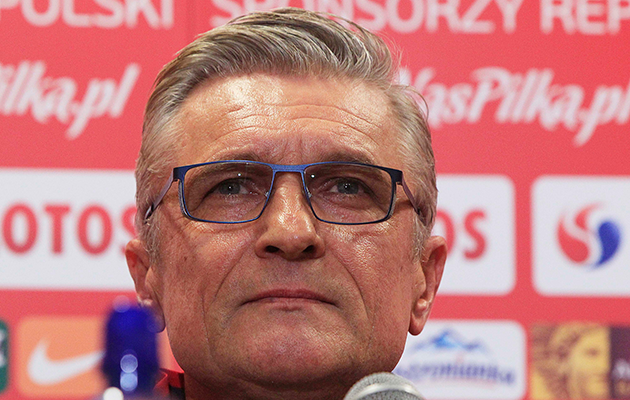 World Soccer: How do you feel about your squad?
Adam Nawalka: We have no problem in any position. Of course, we would like all of our players to be playing regularly in strong leagues, but at this moment in time that is impossible, so I have to be a bit flexible. We have a strong spine in the team.

What is your view of the draw?
I was satisfied after the draw. I had no special wishes and nothing against having Germany in the group again. We were perfectly prepared, tactically and mentally, when we played against them [in the qualifiers]. I believe it will be the same in Paris. Ukraine have a very solid team.

A few players are from top clubs like Shakhtar and Sevilla. We watched their play-off match with Slovenia so we have knowledge of them, but we will analyse their style in detail to find their weak points and be prepared for their strengths. Generally, the schedule of our games is good so we should try to be perfectly prepared for the tournament.

How did you approach your friendly matches in March?
The team is stable and based on players who have proved themselves during Poland’s past matches and who keep up good form in their clubs. It is the result of over three years hard work on the part of the players as well as the entire coaching staff. But selection in the national team is never over.

You must have been happy with the victories in March, against Serbia (1-0) and Finland (5-0)?
I recognise the results with optimism but without euphoria. I am happy that the players showed the same commitment from the first to the last minute.

They played well as a team. The co-operation between each formation looks better and better. The team reorganised quickly after losing the ball and were able to recover it so we could immediately create scoring opportunities.

The team has made a lot of progress over the last year. Mental, tactical and physical preparation are on a high level. Our actual form will be down to the choice of players for the final squad.