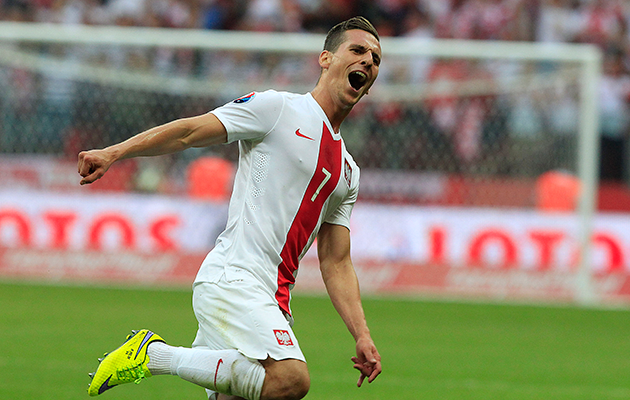 World Soccer: You scored twice as many goals for club side Ajax this season compared to the previous campaign. Why was that?
Arkadiusz Milik: Last season everything was new after my transfer from Bayer Leverkusen. A new club, a new coach, new team-mates and a new home. And I didn’t play as many games as I did this season. And at that time Kolbeinn Sigthorsson was still around.

You have improved as a player since joining Ajax. How did that happen?
I’m indeed a better player now than I was in the summer of 2014. Every day I put a lot of effort in the training sessions. And the presence of Dennis Bergkamp, one of our trainers at Ajax, helps a lot. He’s always around; even after training he still wants us to do some extra shooting. In those sessions, I practise a lot on my weaker right foot.

What’s it like working with him?
Bergkamp was one of the best strikers in the world. It really helps working with legends like him. I can’t explain precisely what he does with the Ajax strikers, but we all improved. It has to do with tiny little details, striker stuff details.

You will face Germany in the group stage of a major finals again…
It wasn’t a surprise to us anymore. But, OK, we knew at the start that we would run across at least one of the big guns.

As the world champions, the Germans are of course the toughest opponents you can imagine. But we proved during the qualification that, if everything goes our way, we can beat them.

In October you scored in a 2-0 win against Germany. How did that feel?
I can’t explain what that goal did to me. It was the first-time ever that we beat the Germans. During the game, the goal was just a goal. But when I saw it back on television, weeks later, I had tears in my eyes. We made 40million Poles extremely happy. The party lasted two full days. At home in Tychy, my mom was the proudest person in the world.

You have a close relationship with national coach Adam Nawalka…
He was responsible for my breakthrough at Gornik Zabrze. He signed me at the age of 17 from Rozwoj Katowice. Within four weeks, he gave me my first-team debut. He gave me his trust and worked a lot with me. He does the same during the last three years at the national team.

What’s his secret as a coach?
To start with, he is a respected Polish player. He played more than 200 games for Wisla Krakow. As a coach, he is a friendly and honest man who can be tough at the right moment. As long as you work your brains out, you have his respect. That’s what players like in a manager.

You play alongside Robert Lewandowski in a 4-4-2 set-up for Poland. What is your role?
We change a lot. We can go deep, right, left or in the ball. But when we defend, we play 4-5-1. It really feels great playing alongside Robert. Together we had 19 goals and 8 assists, that tells the whole story I guess.

For more than two years, we’ve been striking partners. And together, with the faith Mr Nawalka puts in the two of us, we operate as a dangerous couple. But don’t misunderstand me: Robert is by far the best striker of the two of us. I have a lot to learn.

Do you think you will have a successful campaign at the finals this summer?
One thing is certain: we have to do better than four years ago, when we were last in the group stage, even when we played at home. I believe we can do much better, we have a good team with a lot of good and experienced players. It won’t be easy, but I’ll want to stay as long as possible in France. It would be a huge disappointment if we won’t make it to the knockout stage.