Poland meet Portugal in Marseille tonight with the winners looking forward to a Euro 2016 semi-final date with Belgium or Wales.

Portugal, somewhat surprisingly, are the only team to have reached the quarter-finals of the European Championships in every tournament since 1996, while for Poland, this stage is uncharted territory. The Poles had never won won a game at a European Championship finals before this year, but are now just one match away from equalling their their best-ever performance at a major tournament (semi-finalists at the 1974 and 1982 World Cups).

Poland coach Adam Nawałka retains the understated confidence that has characterised his side’s impressive march to the quarter-finals. Unbeaten in four matches and the only side to have held world champions Germany to a draw, Poland, though the lowest scoring of the remaining teams (just 3 goals from 4 games), have fully deserved their place in the last 8.

“I think we have proved what we’re capable of but let’s wait until the match,” said Nawalka on the eve of the match. “We know our strengths and that we are capable of going through. It’s no surprise that we’ve got results at this tournament. We’ve been making good progress and we expect to deliver a high level of football.

“Portugal are a team with great potential who like to attack, but they can also defend. What’s very clear is that when they recover possession, they are very dangerous on the counterattack. We’re expecting a difficult match but we want to control it according to our own game plan.

<<How Poland got to the quarter-finals>>

Two of European football’s most celebrated players in Robert Lewandowski and Cristiano Ronaldocross swords tonight in Marseille. Neither has set the tournament alight thus far with Polish striker Lewandowski yet to open his account at the finals. Nawalka, though, remains unconcerned about the lack of goals from his main man.

“Robert Lewandowski is a very important player,” he acknowledged. “He’s performing a very important role as a captain. He’s in very good physical and mental shape and is doing a great job for us.”

Meanwhile, Portugal coach Fernando Santos, whose side have reached the last 8 having failed to beat a team within 90 minutes, is expecting a closely-fought match.

“We [Greece] faced Poland in the opening game four years ago and I remember it quite clearly,” said the 61-year-old. “But tomorrow’s match has nothing to do with the 2012 one. My counterpart believes Poland will go through; I believe we will go through. There are no favourites – it’s 50-50.” 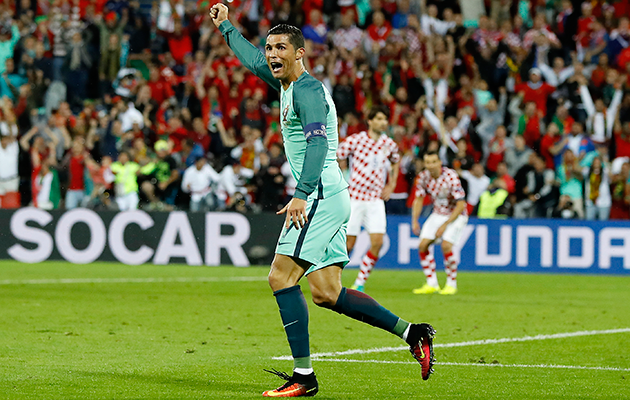 Cristiano Ronaldo has not been at his best, but he remains Portugal’s most potentt attacking weapon.

Much of the focus ahead of tonight’s game has been upon Cristiano Ronaldo, who has been a fitful presence at these finals. Ronaldo, now aged 31, is running out of opportunities to add a major international title to his lengthy list of achievements.

“Everybody is talking about Cristiano Ronaldo and there’s a reason for that – he’s an amazing player,” said the coach. “There are hundreds of players here we don’t talk about every day, but it’s normal to talk about players like Ronaldo or Lewandowski. Ronaldo knows how to deal with that.

<<How Portugal got to the quarter-finals>>

“It’s going to be a balanced game, although I don’t think Poland resemble any team we’ve played so far. They’re a very strategic team. They go from defence to attack very quickly and you can tell a lot of work has been done behind the scenes. When we have the ball ourselves, we’ll try and take advantage of their weak points.”

Poland have midfielder Bartosz Kapustka available again after he missed the Switzerland match through suspension.

Portugal have concerns over midfielders Raphael Guerreiro and Andre Gomes, who are nursing minor muscle problems.

William Carvalho, Pepe and Ricardo Quaresma are a booking away from missing a potential semi-final.

Leonid Slutsky steps down as coach of Russia