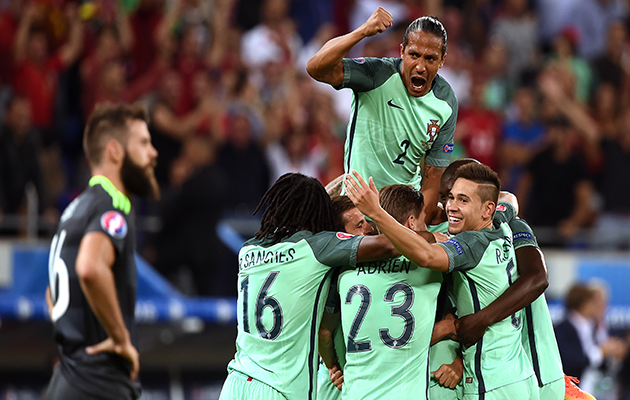 Match overview:
Portugal reached the Final of the European Championship for the second time in their history after beating Wales 2-0 in Lyon. Second-half goals from Cristiano Ronaldo and Nani were enough to take the Portuguese into their first final since they lost to Greece on home soil in 2004.

For Portugal and their captain Ronaldo, the result mattered far more than the stilted nature of their performance. It was their first victory over 90 minutes in the tournament, following their quarter-final win on penalties over Poland and the late extra-time triumph over Croatia.

After the final whistle, Wales fans serenaded their players with one last verse of national anthem Land of My Fathers. Their astonishing tournament, where they had exceeded all expectations, had finally come to end.

In a cagey first-half Wales had contained Portugal with ease, leaving Ronaldo isolated and frustrated as long balls aimed at him were mopped up Welsh centre-backs. James Collins, in for the suspended Ben Davies, slotted in comfortably although he was lucky to get away with a headlock on Ronaldo in the area.

Clever footwork from Ronaldo played in Joao Mario for one of the few chances of an uneventful first half, but the Sporting midfielder fired his shot across goal. Just before half-time, Ronaldo headed an inviting cross over the bar.

Bale, playing deeper than his usual role and without the support of suspended midfielder Aaron Ramsey, did his best to try to break the deadlock. A surging run from his own half ended with a shot held by Rui Patricio and the Portugal captain also shot over when he found himself in space following Joe Ledley’s short corner.

Hal Robson-Kanu, hero of the quarter-final victory over Belgium, again showed a surprising turn of pace, beating Raphael Guerreiro to turn in a cross but Andy King, in for Ramsey, headed just over.

There seemed little prospect of more positive developments after the break. But within a few minutes of the restart Portugal were two up. First Ronaldo outjumped James Chester to head home a Portuguese corner. Then Nani steered Ronaldo’s speculative cross-shot past Wayne Hennessey.

Portugal had chances to add to their lead. Ronaldo, his confidence high, went close with a dipping free-kick and when Hennessey spilt Nani’s shot, Joao Mario blasted the rebound wide. Then Ronaldo rounded Hennessey but was forced wide and hit the side netting. 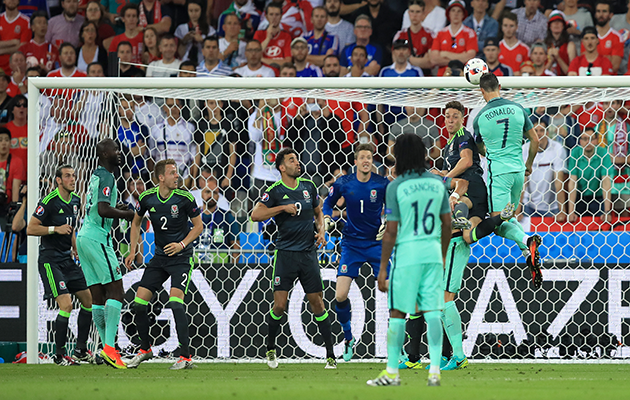 Ronaldo’s leap to head in Portugal’s opening goal. After a cautious first-half, Portugal’s captain seized the initiative and gave his team a huge step towards the Final.

Man of the match:
Cristiano Ronaldo became the first player to appear in three Euro semi-finals and equalled Michel Platini’s Euros scoring record when he scored his ninth tournament goal. He also, albeit inadvertantly, provided the assist for Portugal’s second goal.

Matter of fact:
The selection of Bruno Alves meant all 20 of Portugal’s outfield players appeared at Euro 2016.

Talking point:
In a break with tradition, both teams wore their away kits, Wales in dark grey and Portugal in a fetching turquoise. The official explanation from UEFA was Portugal’s deep red home strip was too close to Wales’ changed colours of “charcoal and lime”.