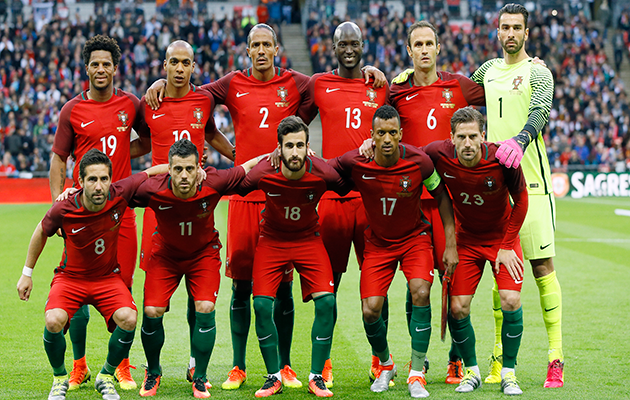 Exciting young winger Bernardo Silva was injured in Monaco’s final game of the season, while full-back Fabio Coentrao lost his battle to be fit in time for the finals.

Raphael Guerreiro, who has excelled in the French league for Lorient, came in as the back-up left-back, while Bernardo Silva’s absence opened the door for Renato Sanches, the Benfica teenager who was recently signed by Bayern Munich in a 35m euro deal.

Anthony Lopes
3/0
Lyon (Fra)
Age 25 (01.10.90)
Born and bred in France, he qualifies through his Portuguese parents. A relative lack of height is made up for with superb reflexes, great anticipation and bucket-loads of bravery.

Rui Patricio
43/0
Sporting
Age 28 (15.02.88)
The national team’s undisputed number one, recently signed a long-term contract with his Lisbon-based club side, saying: “I’ve been here longer than I lived in my parents’ house.”

Ricardo Carvalho
83/5
Monaco (Fra)
Age 38 (18.05.78)
Frozen out of the national team after falling out with previous coach Paulo Bento, Santos did not hesitate in recalling the former Porto, Chelsea and Real Madrid centre-back.

Eliseu
14/1
Benfica
Age 32 (01.10.83)
Yet another converted winger, he is better going forward than he is defending. Often criticised in Portugal but first choice in a successful Benfica side.

Jose Fonte
9/0
Southampton (Eng)
Age 32 (22.12.83)
Captain of his club side and highly rated in England. Had to wait until hitting 30 to make his Portugal debut and many observers believe he should be a regular starter.

Raphael Guerreiro
6/2
Lorient (Fra)
Age 22 (22.12.93)
Attack-minded left-back who has enjoyed a good season in Ligue 1 and is close to a move to Borussia Dortmund.

Pepe
70/3
Real Madrid
Age 33 (26.02.83)
Powerful, Brazilian-born centre-back who owes his imposing physique to a father who made him train by jumping to head the ball in the sea while wearing weights.

Cedric Soares
9/0
Southampton (Eng)
31 August 1991 (age 24)
German-born right-back who is a fine crosser of the ball. A solid debut season in the Premier League should ensure his place in the squad.

Vieirinha
19/1
Wolfsburg (Ger)
Age 30 (24.01.86)
Adelino Andre Vieira de Freitas’ conversion from a winger to full-back was so successful that he was voted the best right-back in the Bundesliga last season.

William Carvalho
17/0
Sporting
Age 24 (07.04.92)
The powerful, Angolan-born defensive midfielder was named player of the tournament at last summer’s Euro Under-21 Championship in the Czech Republic.

Danilo
9/0
Porto
Age 24 (09.09.91)
Physically imposing holding midfielder who has been one of the few bright spots in a disappointing season for his club side with consistently dominant displays.

Andre Gomes
5/0
Valencia (Spa)
Age 22 (30.07.93)
All-action midfielder who has been largely outstanding in Spain over the past two seasons despite his club’s chronic instability.

Joao Mario
8/0
Sporting
Age 23 (19.01.93)
Elegant, creative and intelligent midfielder who broke into the Sporting side early last season and has got better and better. Atletico Madrid and Manchester United are both tracking him closely.

Joao Moutinho
81/4
Monaco (Fra)
Age 29 (08.09.86)
The diminutive midfield dynamo has been Portugal’s most important player – after Ronaldo – for several years and can now count on an exciting array of young, high-calibre midfield colleagues alongside him.

Rafa
6/0
Braga
Age 23 (17.05.93)
Direct and technically gifted winger with an eye for goal, he was the youngest member of Portugal’s World Cup squad in Brazil but did not get off the bench. An impressive domestic season this term should change that.

Renato Sanches
4/0
Benfica
Age 18 (18.08.97)
The youngest Portugal player to feature at a major tournament. Will join Bayern Munich in July.

Adrien Silva
7/0
Sporting
Age 27 (15.03.89)
Born in France and has flourished under club coach Jorge Jesus who made him Sporting captain. A fierce competitor with a silky touch, he is also a nerveless penalty taker.

Eder
23/1
Swansea City (Eng)
22 December 1987 (age 28)
Much maligned and has never re-found his best form since suffering a cruciate-knee-ligament tear in early 2013. A big physical presence who has struggled to find the net in a Portugal shirt, he joined Lille on loan in January.

Nani
94/17
Fenerbahce (Tur)
Age 29 (17.11.86)
His Manchester United career fizzled out in disappointing fashion but he re-found his spark first in Portugal at Sporting, then in Turkey at Fenerbahce. Joint-fourth with Rui Costa in Portugal’s all-time appearance list.

47/4
Ricardo Quaresma
Besiktas (Tur)
Age 32 (26.09.83)
Mercurial winger and the king of the trivela – shot or cross with the outside of his foot – whose career has never quite lived up to his extravagant talents. Made some important appearances off the bench in qualifying and may have a similar role in France.

Cristiano Ronaldo
125/56
Real Madrid (Spa)
Age 31 (05.02.85)
Has obliterated the country’s goalscoring record and is on the verge of becoming the national side’s most capped player. All but a few Eusebio diehards refuse to accept that he is Portugal’s greatest-ever player.