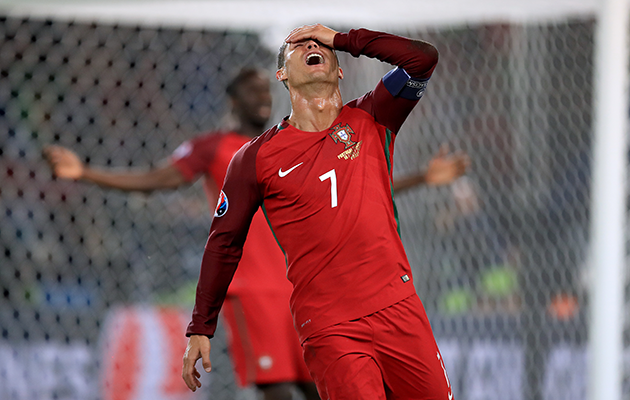 Cristiano Ronaldo missed a penalty and had a goal ruled out for offside as Portugal were held to a frustrating 0-0 draw by Austria in Paris. Portugal dominated possession and had plenty of chances but could not find a way through to goal. Ronaldo, on the night be became Portugal’s most capped player of all time, endured a particularly frustrating time, especially after comments following the draw with Iceland in the previous match.

Austria had deployed David Alaba in an attacking role but he was left isolated as the Austrians had to submit to waves of Portuguese attacks. Nani came closest for Portugal in the first half, hitting a post with a header from a corner while Ronaldo side-footed a wonderful chance wide of the post.

In the second half, Portugal converged on the Austrian goal but often failed with their final pass. Ronaldo wasted a free-kick that he insisted on blasting at the Austrian ball from 40 yards out. He then fluffed the penalty that had been awarded after he was pushed over by Martin Hinteregger, striking the bottom of a post with Austria keeper Robert Almer beaten. And just as it seemed his frustrating night could not get any worse, Ronaldo found the net with a header, only to see the goal struck off because he was offside.

Portugal looked like they were finally about to make the breakthrough after a night of missed opportunities but Ronaldo hit a post with his 79th-minute penalty, awarded after he had been pushed over by Austrian defender Martin Hinteregger.

Ronaldo may have become Portugal’s most capped player of all time but he endured one of the most frustrating nights of his career. At the age of 31, he played like the long club season in Spain had caught up with him. Taunted by Austrian fans with chants of “Messi! Messi!”, his miserable evening was capped by missing penalty in the second half and then when he did get the ball in the net, his header was ruled offside.