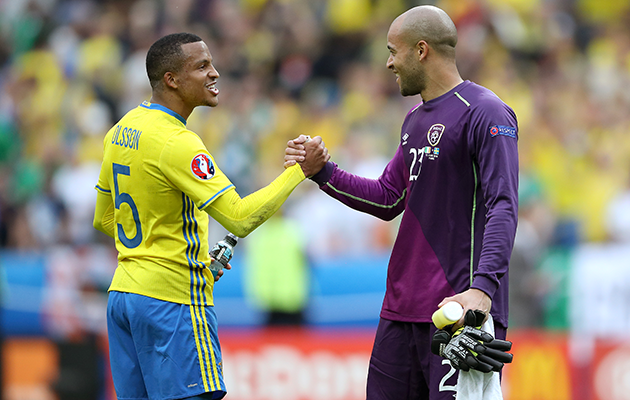 Republic of Ireland and Sweden shared the spoils at Stade de France in a match that neither could afford to lose. It was not a contest expected to feature much quality – relegated Norwich City had more players in this match than Milan have in the entire tournament – but Republic of Ireland took a deserved lead early in the second half through Wes Hoolahan. The Irish had dominated proceedings up until then but they sat back and invited Sweden to search for the equaliser. Despite some resolute defending to a succession of Swedish corners, the leveller eventually arrived when Ciaran Clak turned Zlatan Ibrahimovic’s cross-shot into his own net.

It had been coming. Wes Hoolahan’s goal, a splendid half volley after a run and cross from right-back Seamus Coleman was no more than Republic of Ireland deserved up until that point.

Wes Hoolahan buzzed around behind Ireland’s two forwards and took his goal superbly. Ireland’s attacking play lost much of its impetus when he was subbed.

At an average age of 29.39 and with 11 players over the age of 30, Ireland are the oldest squad in the tournament. Robbie Keane became the oldest outfield player to play for Republic of Ireland at the Euros.

For most of the game, Zlatan Ibrahimovic had a frustrating time. He was on a different level to his international team-mates and mostly found himself crowded out by an Irish defence that included two players relegated from the Premier League. And yet he still played a major part in Sweden’s equaliser, flashing in the cross that struck the unfortunate Ciaran Clark.