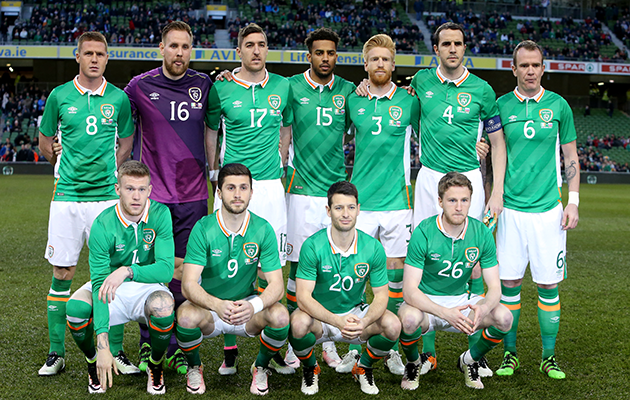 Sheffield Wednesday keeper Keiren Westwood was the surprise inclusion in the squad, picked instead of David Forde, a squad member throughout the qualifying campaign.

Midfielder Stephen Quinn made the final 23 as a replacement for Harry Arter, who suffered a thigh injury in training on the day before the final squad was announced.

Shay Given
133/0
Stoke City (Eng)
Age 40 (20.04.76)
Came out of international retirement in 2014 and went straight back into the team. The most-capped Irish keeper, have broken Packie Bonner’s Republic of Ireland record and Pat Jennings’ record for Northern Ireland. The manager will give him as much time as possible to recover from injury.

Darren Randolph
8/0
West Ham United (Eng)
Age 29 (12.05.87)
Born in Bray after his father, Ed Randolph, went to Ireland from the US to play pro basketball. Made his senior debut in friendly against Oman in September 2012 and impressed in his Euro debut against Germany in October.

Robbie Brady
23/4
Norwich City (Eng)
Age 24 (14.01.92)
Joined Manchester United as a trainee but made only one appearance. Loaned to Hull City and later signed for them. No relation of Liam Brady, but they did both played for the same Dublin schoolboy club, St. Kevin’s Boys, and he has a younger brother named Liam, who has played for Ireland at under-18 level.

Ciaran Clark
18/2
Aston Villa (Eng)
Age 26 (26.09.89)
Captained England at under -19 and under-20 level before declaring for the Republic after encouragement from former Villa team-mate Richard Dunne. Born in Harrow, he qualifies as both his parents have Irish connections. First capped against Wales in February 2011.

Cyrus Christie
4/1
Derby County (Eng)
Age 23 (30.09.92)
Made his debut in the friendly against the US in November 2015 and scored his first goal in his next game, away to Gibraltar. The natural cover for Coleman at right-back, he was born in Coventry but can trace his relations back to Patrick Malone, who played for Shamrock Rovers in the 1920s.

Seamus Coleman
33/0
Everton (Eng)
Age 27 (11.10.88)
Didn’t play soccer seriously until he was 18, preferring to Gaelic football in his native Donegal. Impressed manager Paul Cook at Sligo Rovers and was snapped up for a bargain E60,000 plus extras by Everton in January 2009. Captained the national side for first time against Germany in 2013, on his 25th birthday.

Richard Keogh
11/1
Derby County (Eng)
Age 29 (11.08.86)
Born in Harlow, he qualifies through his father’s Carlow connections. Club captain who skippered the national side in a friendly against Oman. Spent time on loan at Icelandic club Vikingur when at Stoke City.

John O’Shea
110/3
Sunderland (Eng)
Age 35 (30.04.81)
Normally captain in Robbie Keane’s absence, he was sent off when wearing the armband away to Poland in October. Twelve months earlier he scored the crucial late equaliser against Germany in Gelsenkirchen when winning his 100th cap.

Stephen Ward
32/2
Burnley (Eng)
Age 30 (20.08.85)
Played up front for Bohemians in the League of Ireland, but switched by ex-Ireland boss Mick McCarthy to left-back when he joined Wolves in January 2007. Scored on his debut against Northern Ireland in May 2011.

Jeff Hendrick
18/0
Derby County (Eng)
Age 24 (31.01.92)
Played gaelic football until he was 15, but says soccer was always his first love. Impressed with St Kevin’s Boys and got a move to Derby County in 2010. Made his senior debut against Poland in February 2013. Overcame Osgood-Schlatter disease as a youth.

Wes Hoolahan
29/2
Norwich City (Eng)
Age 34 (20.05.82)
Won his first cap in Trapattoni’s second game in charge, in May 2008, but had to wait four-and-a-half years for his second. However, Martin O’Neill appreciates what the playmaker offers. Began with Dublin schoolboy club Belvedere.

James McCarthy
35/0
Everton (Eng)
Age 25 (12.11.90)
The Glasgow-born midfielder who qualifies through his Donegal connections. Despite being a fine player he hasn’t always impressed at international level. Had to miss out on the Euro 2012 finals due to his father’s illness.

James McClean
36/5
West Bromwich Albion (Eng)
Age 27 (22.04.89)
Played in the League of Ireland for his native Derry before joining Sunderland, where he was given his Premier League debut by Martin O’Neill. Is due to get married on eve of the FA Cup Final.

Aiden McGeady
81/5
Everton (Eng)
Age 30 (04.04.86)
Scottish-born player but qualifies through his Donegal connections. Was the first Irishman to play in the Russian league, with Spartak Moscow. Joined Sheffield Wednesday on loan in February. His father, John, played for Sheffield United and Newport County.

David Meyler
14/0
Hull City (Eng)
Age 27 (29.05.89)
Versatile performer who played for his native Cork City in the League of Ireland and joined Sunderland in 2008. His father, John, is a former inter-county hurler with Wexford and Cork and has managed senior inter-county hurling teams.

Glenn Whelan
70/2
Stoke City (Eng)
Age 32 (13.01.84)
The Dubliner has his critics in Ireland, but was a regular under Trappatoni and continues to do a good holding job in midfield for O’Neill. Played for Manchester City and Sheffield Wednesday before moving to Stoke in January 2008.

Robbie Keane
143/67
LA Galaxy (USA)
Age 35 (08.07.80)
Holds the Irish record for caps and goals, and has scored in every calendar year since 1998. Has also captained his country a record 71 times but is no longer a certain starter. Along with Shay Given, he is the only survivor from the 2002 World Cup squad.

Shane Long
61/15
Southampton (Eng)
Age 29 (22.01.87
Played hurling as a teen for Tipperary and is the only player to have played minor hurling and international soccer at Croke Park. Began with Cork City and joined Reading in 2005. Scored spectacular goals against England and Germany, and played guitar on the official Irish song for Euro 2012.

Daryl Murphy
20/0
Ipswich Town (Eng)
Age 33 (15.03.83)
Played in the League of Ireland for Waterford United before trying his luck in England. It didn’t work out at Luton Town, but after a season back home he then got a move to Sunderland and later followed Mick McCarthy to Ipswich Town.

Jon Walters
38/10
Stoke City (Eng)
Age 32 (20.09.83)
Scored five goals in the qualifiers. He has had a varied career, beginning at Blackburn Rovers and had joined Stoke by the time he made his debut against Norway in November 2010. Born on Merseyside, his late mother was from Dublin. His father is a big Everton fan.