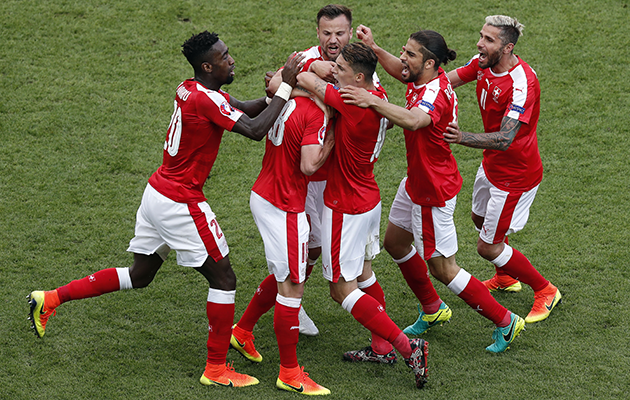 On the balance of play, both teams should be content with a point. Switzerland were poor in the first half and Romania deserved to be in front at the break courtesy of Bogdan Stancu’s 18th minute penalty. The Swiss improved after Admir Mehmedi’s equaliser and exerted plenty of sustained pressure on their opponents, but failed to threaten Ciprian Tătăruşanu in the Romanian goal.

The decision by Stephan Lichtsteiner to pull the shirt of Alex Chipciu in full view of the referee was a moment of stupidy by the experienced Swiss captain.

In a poor, scrappy match, low on thrills, the left-footed strike by Admir Mehmedi that brought Switzerland level, was a rare moment of quality.

There have been only two penalties so far at Euro 2016 and both have been scored by Romania’s Bogdan Stancu.

Switzerland need a goalscorer. Once again Haris Seferović was wasteful up front, missing two good chances in the opening 20 minutes. He was eventually withdrawn, to be replaced by the highly rated Breel Embolo, who showed flashes of raw talent, but at 19, looks ill-equipped to carry the attacking burden.