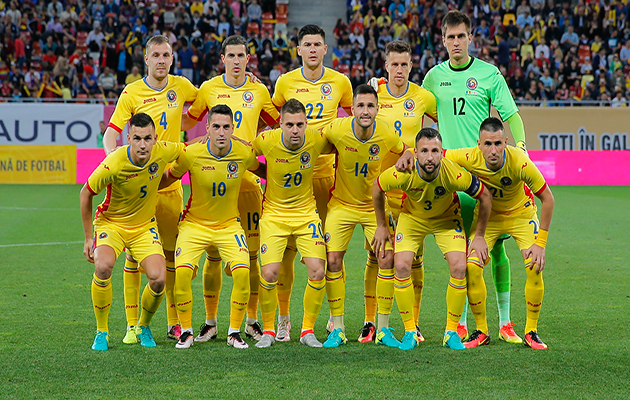 Alex Maxim, tipped by many to be Romania’s number 10, was the biggest omission from the final 23. He had not been a regular starter at Stuttgart this season and was not called up for the friendly against Spain in March, but had still been expected to make the finals squad. Maxim and Adrian Ropotan were cut from the provisional 28-man squad, along with Ioan Hora, Alin Tosca, and Andrei Ivan.

Alexandru Matel and Andrei Prepelita, who had not been expected to make the final 23, survived the cut.

Ciprian Tatarusanu
35/0
Fiorentina (Ita)
Age 30 (09.02.86)
A handball goalkeeper during his schooldays, he kept seven clean sheets in qualifying. Excellent in one-on-ones and a fine shot stopper.

Vlad Chiriches
39/0
Napoli (Ita)
Age 26 (14.11.89)
The best Romanian defender of his generation, he played for Benfica as a youth but had to return home after injury almost ended his career.

Steliano Filip
3/0
Dinamo Bucharest
Age 22 (15.05.94)
Began as a winger and still has to improve his defensive contribution. Disappointed by his club’s decision not to name him captain earlier this year.

Valerica Gaman
13/1
Astra
Age 27 (25.02.89)
Tall and good with the ball, he has missed out on some important transfers during his career and sees Euro 2016 as a definite stepping stone.

18/0
Dragos Grigore
Al Sailiya (Qat)
Age 29 (07.09.86)
Partnered Chiriches throughout the qualifying campaign but feared he would not get called anymore after moving from Toulouse to Qatar.

Cosmin Moti
7/0
Ludogorets (Bul)
Age 31 (03.12.84)
Has a stand named after him at his club after going in goal and saving two penalties in a Champions League shoot-out.

Razvan Rat
108/2
Rayo Vallecano (Spa)
Age 35 (26.05.81)
Left-back and regular captain who hopes to recover from a shoulder injury that sidelined him for four months. Influential on the pitch and in the dressing room.

Cristian Sapunaru
11/0
Pandurii
Age 32 (05.04.84)
Used at right-back in the national team, he can also play at centre-half or in defensive midfield. Refused to play for Romania under Victor Piturca.

Alexandru Chipciu
20/3
Steaua
Age 27 (18.05.89)
Can play on the wing, behind the striker or as a false nine, but a series of bad injuries stopped his progress at an early stage.

Alexandru Matel
16/0
Dinamo Zagreb (Cro)
Age 26 (17.10.89)
Attack-minded right back but has had limited playing time with Dinamo Zagreb where he was also used at left back. Spent a number months training alone after refusing to extend his contract with Astra, in 2014.

Mihai Pintilii
29/1
Steaua
Age 31 (09.11.84)
Defensive midfielder who is one of Iordanescu’s favourites. Rejoined Steaua in January after playing in Isreal.

Adrian Popa
11/0
Steaua
Age 27 (24.07.88)
Nicknamed “The Motorcycle” because of his speed, he grew up as a Steaua fan and made his dream of playing for the club real after move from Concordia Chiajna in 2012.

Andrei Prepelita
10/0
Ludogorets (Bul)
Age 30 (08.12.85)
Defensive midfielder who was a title winner in Bulgaria this season. Capped at Under-21 levele but waited eight years before making his senior debut in 2014, aged 28.

Lucian Sanmartean
18/0
Al Ittihad (Sau)
Age 36 (13.03.80)
Failed to fulfil his potential because of injuries and and a fragile confidence. Almost retired five years ago.

Nicolae Stanciu
2/1
Steaua
Age 23 (07.05.93)
Scored on his debut, against Lithiuania, in March. Romania’s most exciting prospect, his club side have placed a minimum release clause of E10m on him.

Gabriel Torje
48/10
Osmanlispor (Tur)
Age 26 (22.11.89)
Quick winger who was bought by Udinese to replace Alexis Sanchez after they sold the Chile international to Barcelona.

1/0
Denis Alibec
Astra
Age 25 (05.01.91)
Bought by Internazionale as a teenager but failed to hit the heights. The best striker in the Romanian league, Steaua are set to sign hin this summer.

Claudiu Keseru
10/4
Ludogorets (Bul)
Age 29 (02.12.86)
Prolific goalscorer who played French top-two tiers for 11 consecutive years and later played in Qatar. Good at finding space and capable of creating chances from next to nothing.