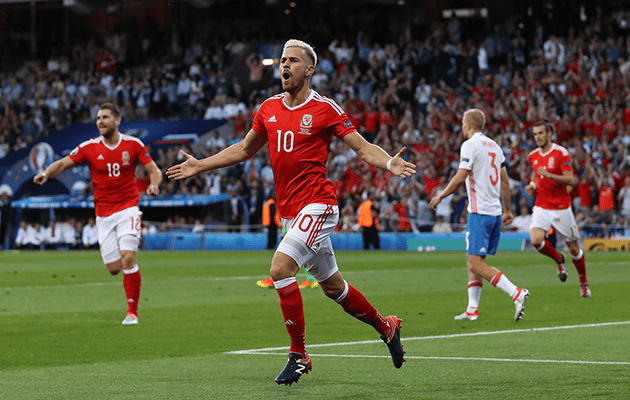 Wales produced a dominant performance to defeat an abject Russian side 3-0 in Toulouse. The win guaranteed Wales a place in the knockout stages and to complete a memorable night for Chris Coleman’s side, England’s goalless draw with Slovakia, means they go through to the last 16 as the winners of Group B.

The match as a contest was over after just 10 minutes when the impressive Aaron Ramsey latched on to Joe Allen’s incisive pass and dinked the ball over the onrushing Igor Akinfeev. Wales doubled their lead on 19 minutes when Neil Taylor scored at the second attempt after good initial work from Gareth Bale. Bale himself added a third midway through the second half, beating the offside trap to collect a clever pass from Ramsey before lofting the ball over Ankinfeev.

It was a commanding display from Wales, arguably their finest since 1958, when they last appeared at a major tournament.

Leonid Slutsky’s Russia side have been a huge disappointment at Euro 2016, but at least they have been competitive. However, from the moment Ramsey opened the scoring, Wales carved them open at will.

Man of the match:
Gareth Bale scored his third goal in as many matches and was a constant threat throughout. His trademark lung-busting runs have been rarely seen thus far at Euro 2016, but in Toulouse he constantly had Russia on the back foot.

Gareth Bale has hit 12 shots on target at Euro 2016 – the record for a whole European Championship is Michel Platini’s 15 in 1984. With at least one more match to come, the record could soon be his.

Talking point:
Wales came into the game hopeful of qualifying for the knockout stages, but from the moment Aaron Ramsey put them ahead, there was little doubt about the outcome of the match. They now face one of a trio of possible third-placed teams in the next round and on curent form must fancy their chances of reaching the quarter-finals.