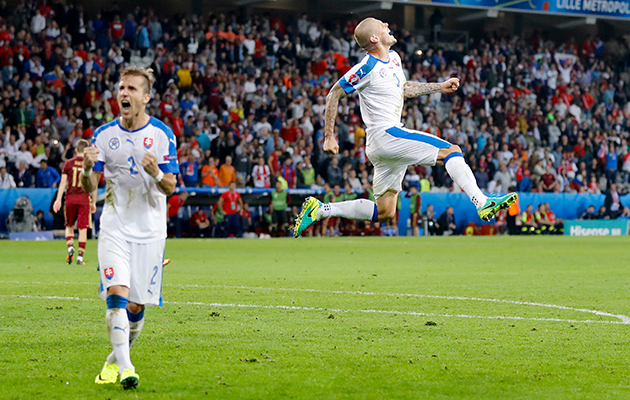 Marek Hamsik produced the best individual performance of the tournament so far to lead Slovakia to a 2-1 victory over Russia in Lille. Russia tried to play more open game than against England but left themselves vulnerable at the back. Their defensives lapses were exploited by Slovakia and their brilliant midfielder Hamsik, who set up Vladimir Weiss for the opening goal and scored a brilliant second himself. Russia staged a late rally, scoring through Denis Glushakov prompting a furious final few minutes. Russia had been threatened with expulsion from the tournament if their fans misbehaved. But the Russian players did their best on to ensure an early exit with their performance on the pitch.

Hamsik’s goal just before half-time. The Napoli midfielder took advantage of slack Russian defending at a corner to collect the ball on the left-hand flank and turn inside Oleg Shatov. From a tight angle, he still had a lot to do, but he struck a spectacular shot that flew past Igor Alinfeev and crashed in off the far post. The game’s outstanding player had dealt Russia a hammer blow.

Marek Hamsik set up Slovakia’s first goal for Vladimir Weiss with a sumptuous pass, then scored a spectacular goal just before half-time to put Slovakia firmly in control. The outstanding individual performance of the tournament so far.

Vladimir Weiss became the first player to score at the European Championship while playing for a non European club (Al Gharrafa, Qatar)

The game was played under a closed roof in the Lille Metredome because of the wet weather. It did not subdue the atmosphere: Slovakia fans, backed by a drum, made a racket through the whole 90 minutes. A flare was let off in the Russian end when substitute Denis Glushakov pulled a goal back, prompting speculation that UEFA could now act on its threat to expel Russia. But the players had done a pretty good job themselves of ensuring an early exit.