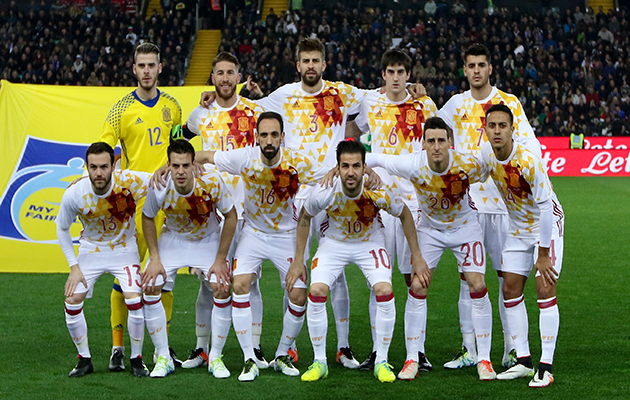 The country’s all-time top scorer, Robert Vittek, has surely said goodbye to his international career after being ruled out of the tournament by injury. Martin Dubravka was not selected, while Lukas Tesak and Erik Sabo were cut from the provisional 27-man squad.

The 21-year-old centre-back Milan Skriniar was a surprise inclusion, having had little playing time in Serie A this season.

Jordi Alba
42/6
Barcelona
Age 27 (21.03.89)
Quick and hugely important for the national side, both defensively and in offering width and incision to the attack.

Marc Bartra
9/0
Barcelona
Age 25 (15.01.91)
Despite getting few chances for his club, Del Bosque has included him regularly for Spain and concedes “he’ll be fresh”.

Hector Bellerin
2/0
Arsenal (Eng)
Age 21 (19.03.95)
Barcelona-raised right-back who was a late addition to the Euro finals squad after receving his first senior call-up.

Gerard Pique
76/4
Barcelona
Age 29 (02.02.87)
Vital for club and country, excellent defender and comfortable in posession. However, his off-field presence commands as much attention as his on-field one.

Sergio Ramos
131/10
Real Madrid
Age 30 (30.03.86)
Scored a “Panenka” penalty in the 2012 semi-final, but Spain’s all-action captain has not had the best of club seasons after struggling with a shoulder injury.

Cesc Fabregas
103/14
Chelsea (Eng)
Age 29 (04.05.87)
Won the league in his first season with Chelsea but was this term forced to deny he had any part in the revolt that ended with Jose Mourinho being sacked.

Koke
22/0
Atletico Madrid
Age 24 (08.01.92)
Seen as a potential leader in central midfield but, despite his talent and temperament, he has not quite taken that step yet.

Mikel San Jose
5/0
Athletic Bilbao
Age 27 (30.05.89)
Has grown into a defensive midfielder with Athletic this season, having previopusly been seen as a central defender.

Thiago Alcantara
6/0
Bayern Munich (Ger)
Age 25 (11.04.91)
Seen by many as the successor to Xavi. Two terrible injuries have damaged his career but he is fit again now. The son of Mazinho.

Aritz Aduriz
3/1
Athletic Bilbao
Age 35 (11.02.81)
Getting better as he gets older. Good in the air, technically accomplished and scoring more than ever in his thirties.

Lucas Vasquez
0/0
Real Madrid
Age 24 (01.07.91)
Winger who has enjoyed his first seasn in the Real first team after a year on loan at Espanyol. Surprise pick.

Alvaro Morata
8/1
Juventus (Ita)
Age 23 (23.10.92)
Although his natural role is as a centre-forward, he has impressed when played in a slightly wider role.

David Silva
96/23
Manchester City (Eng)
Age 30 (08.01.86)
A virtual ever-present with touch, vision and creativity, even if he has not always felt like the central figure for Spain.