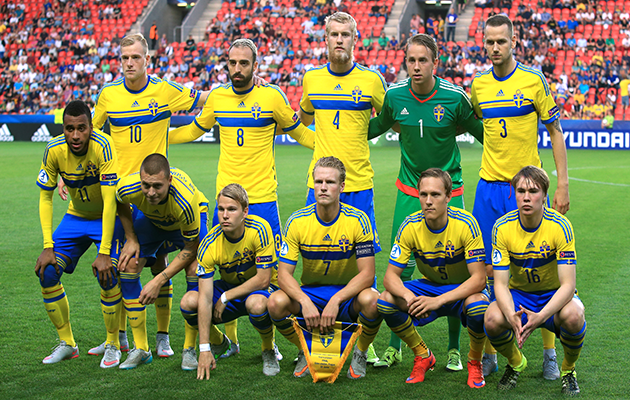 There were very few surprises in Erik Hamren’s final selection.

Patrik Carlgren was selected ahead of Johannes Hopf as third-choice keeper. Pontus Jansson and Erik Johansson were preferred in central defence to Alexander Milosevic, while Mikael Antonsson missed out through injury. Right-back Emil Salomonsson was overlooked as Hamren opted for only seven defenders. That allowed for the inclusion of attacker Emir Kujovic as a possible wild card.

Midfielder Albin Ekdal was included despite being hospitalised after a nightclub fall while celebrating with Hamburg team-mates after they secured their Bundesliga status.

Ludwig Augustinsson
3/0
Copenhagen (Den)
Age 22 (21.04.94)
Up and coming left-back with plenty of tenacity, commitment and drive. Played every minute of the Euro Undfer-21 triumph last year.

Emir Kujovic
4/1
Norrkoping
Age 27 (22.06.88)
Tall attacker who was born in the former Yugoslavia. First called up by the seniors for last year’s play-off against Denmark.

Mikael Lustig
50/2
Celtic (Sco)
Age 29 (13.12.86)
Celtic vice-captain, can play in central-defence or right-back, but usually lines up on the flank for his country, where his sense of adventure and high energy comes to the fore.

15/1
Emil Forsberg
RB Leipzig (Ger)
Age 24 (23.10.91)
Wide man or number 10 who palys in the German second tier. Like his grandfather and father, he used to play for Swedish club Sundsvall.

Oscar Hiljemark
9/1
Palermo (Ita)
Age 23 (28.06.92)
An uncompromising battler who also has fine technique and excellent vision. Captained Sweden’s under-21 side when just 18.

Kim Kallstrom
127/16
Grasshoppers (Swi)
Age 33 (24.08.82)
Veteran defensive midfielder who many have claim is past his sell-by date but has never let Hamren down. Set-piece expert.

Oscar Lewicki
9/0
Malmo
Age 23 (14.07.92)
Gritty and tactically disciplined central midfielder. Another former under-21 headliner, he spent time at Bayern Munich as a teenager.

Pontus Wernbloom
50/2
CSKA Moscow (Rus)
Age 29 (25.06.86)
Hyperactive and uncompromising sweeper in front of the back-four, but can overstep the regulatory mark on occasion.

John Guidetti
7/0
Celta Vigo (Spa)
Age 24 (15.04.92)
Battering-ram striker who for most of his career has looked far happier in a Sweden shirt than in club colours. Full-blooded, he is a fans’ favourite.