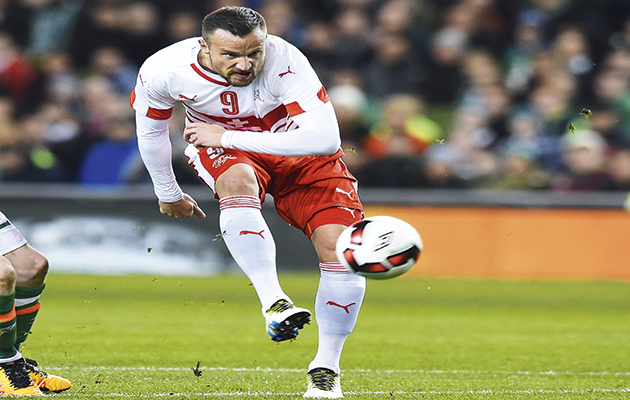 Having come within one agonising minute of taking Argentina to a penalty shoot-out at the World Cup in Brazil, Switzerland should be heading to France in a mood of unbridled optimism. A squad that was young and still improving is now two years older and more mature, and after a poor start to the Euro qualifiers they finished a comfortable second in their group with seven wins in 10 games. Doubts, however, have begun to creep in.

One of the perennial problems facing Switzerland coaches is a lack of playing time for their top players at club level.

In the run-up to the World Cup, playmaker Xherdan Shaqiri found himself shunted onto the bench at Bayern Munich. Having found a new lease of life at Stoke City, his is a clear example of how moving to a smaller club need not be a step backwards for a player. But this time around it was captain Gokhan Inler who found himself on the shelf at club level.

Inler has been a fixture in front of the Swiss defence for the best part of a decade, playing at Euro 2008 and in two World Cups, and it is hard to imagine Switzerland without him.

But his summer move from Napoli to Leicester City, which might have seemed a good idea at the time, turned sour as he has been unable to force his way into the starting line-up.

Although he was a regular in qualifying, Inler’s lack of playing time prompted Vladimir Petkovic to leave him out of the squad for the finals.

The form of Switzerland’s forwards, who all play in the Bundesliga, is another headache. Haris Seferovic (Eintracht Frankfurt), Josip Drmic (Borussia Monchengladbach) and Admir Mehmedi have all been struggling this season.

Meanwhile, Petkovic has not been able to impose his playing philosophy on the team. When he took over, he said the team should dominate possession in all their games, but that has proved to be easier said than done and Switzerland still look more comfortable when the opposition take the initiative.

The qualifying campaign was not as impressive as the final standings suggest and basically boiled down to the last 10 minutes of their tie at home to Slovenia, when they hit back from 2-0 down to win 3-2. Had Slovenia won that game, they would have finished second and the Swiss would have been forced into a play-off.

Apart from that, the Swiss duly beat Estonia, Lithuania and San Marino home and away. But they also lost twice to England without putting up much of a fight and were beaten away by Slovenia.

Cracks have even appeared in the team’s reputation for being a glowing example of ethnic integration in a country where foreigner-bashing is openly practised by politicians.

Last year, Lichtsteiner openly suggested there were too many “Secondos” in the squad, and at the same time said that Petkovic should find room in the squad for Tranquillo Barnetta and Pirmin Schwegler.

Petkovic turned a blind eye, leaving an awkward question hanging in the air: would Lichtsteiner have made the comment when Ottmar Hitzfeld was in charge?

Yet maybe it could all just click into place at the right moment.

The Swiss squad is still youthful, there is plenty of talent there and the Secondos have provided the flair and irreverence that was missing from the side until a few years ago. 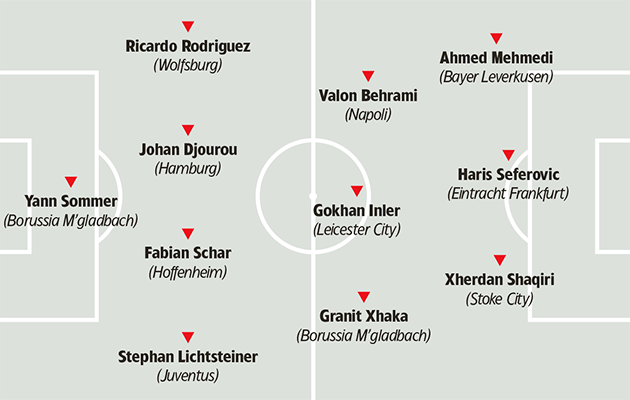 Since replacing Ottmar Hitzfeld after the last World Cup, Vladimir Petkovic has tried to turn the Swiss into a more aggressive outfit who look to dominate possession. He likes them to press deep in their opponents half, saying: “If you are pressing forward and have a high line, then losing the ball is less serious. If you lose the tackle 70m from your own goal, you still have enough time to successfully defend yourself.”

Yann Sommer has replaced Diego Benaglio as Petrovic’s first-choice goalkeeper, while the central pairing in front of him have chopped and changed, with Fabian Schar and Johan Djourou seemingly the most likely duo. There is no debate about the full-back positions, where Stephan Lichtsteiner and Ricardo Rodriguez both offer good attacking options down the flanks.

Further forward, Petkovic likes to mix things a little, sometimes fielding two strikers with Xherdan Shaqiri just behind them as a “trequartista”, or a single striker, generally Haris Seferovic, with two players on the flanks, usually Shaqiri and Ahmed Mehmedi. 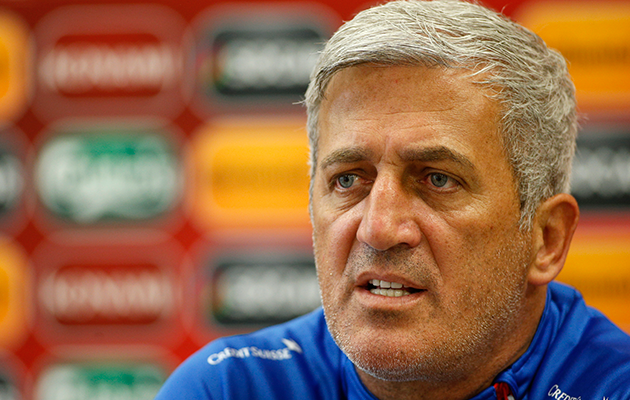 Vladimir Petkovic (Bos)
Age 52 (15.08.63)
Part of Sarajevo’s league-winning squad in 1985, he later emigrated to Switzerland and split his early coaching days with part-time work in a charity shop.

Led second-tier Bellinzona to the Swiss Cup Final and promotion in 2008 and then took Young Boys to two successive second-place finishes in the league.

Won the Italian Cup in his first season with Lazio, but infuriated the club’s volatile president Claudio Lotitio by announcing he would take charge of Switzerland when his contract expired.