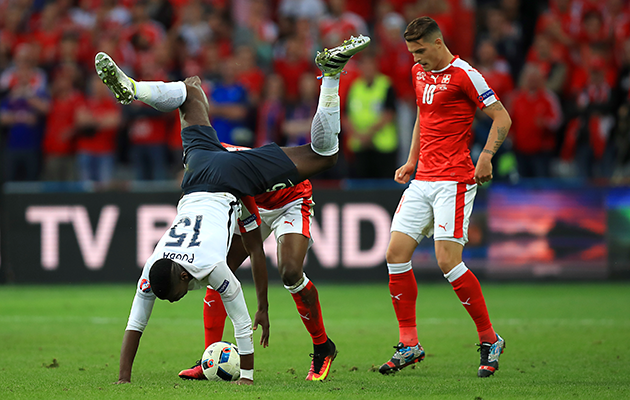 France and Switzerland played out an eventful 0-0 draw in Lille, a result which suited both sides, who finished first and second respectively in Group A.

Paul Pogba, restored to a much-changed French starting line-up after being dropped by Didier Deschamps for France’s previous game against Albania, gave a dynamic performance to answer his critics. The Juventus midfielder came close to scoring three times in the opening 17 minutes, while Antoine Griezmann and substitute Dimitri Payet also stung the fingers of Swiss keeper Yann Sommer with fierce shots.

Such is the strength in depth in the France squad that coach Didier Deschamps was able to rest Payet, the oustanding player of the opening two games, along with Olivier Giroud and N’Golo Kante, who were both a yellow card from suspension. Blaise Matuidi and Antony Martial were also dropped, with Pogba and Griezmann back in the starting line-up.

Switzerland did not manage a shot on target in the entire match, but the draw confirmed their second place in the group and a second-round match in Saint-Etienne next Saturday.

Pogba’s run and powerful shot against the crossbar early in the first half. If that had gone in, the floodgates may have opened for France. As it was, the result suited both sides.

Poyet began like a steam train against the Swiss. Three shots in the first 17 minutes – the first two testing Swiss keeper Yann Sommer, the third flashing off the top of the crossbar after a powerful run – showed Pogba meant business.

Didier Deschamps became only the fifth manager of the French national side to take charge of a 50th game (after Raymond Domenech 79, Michel Hidalgo 75, Aime Jacquet 53 and Roger Lemerre 53).

Three Swiss players had their paper-thin shirts ripped up during challenges in the first half; the Adidas matchball burst when Velon Behrami trod on it; and the Stade Pierre Mauroy pitch was in a poor state following the recent heavy rains, with players regularly losing their footing. It was hard to believe we were watching a major tournament organised by football’s wealthiest confederation.