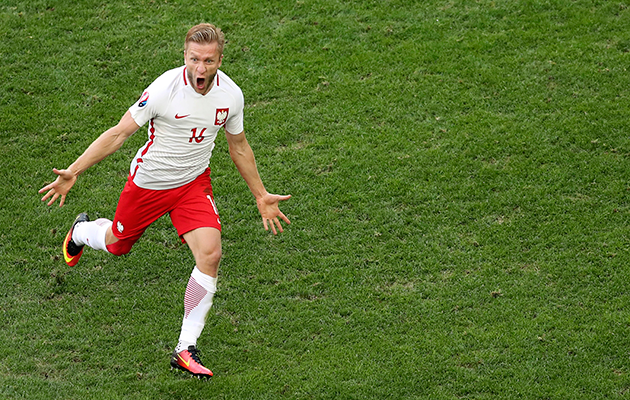 Poland defeated Ukraine 1-0 in Marseille to set up a Round of 16 encounter against Italy. On the evidence of three solid performances in the group matches, it is not an encounter Vladimir Petkovic’s team will relish.

Poland began the game at a blistering pace and could have scored twice in the opening seven minutes. But, as the game wore on, Ukraine grew in confidence and carved out some chances of their own and couyld feel slightly aggrieved not to have taken something from the game.

The game was eventually settled on 53 minutes when Poland produced a rare moment of quality to finally breach an obdurate Ukraine defence. After a neatly worked short corner, Arkadiusz Milik fed subsitute Jakub Błaszczykowski who cut inside on to his left foot and fired into the far corner with a curling shot.

Ukraine pushed hard for an equaliser but a lack of quality in the final third cost them dearly. They return home pointless and goalless.

As for Poland, unbeaten in a group containing the world champions, Germany, Adam Nawałka has created a well organised, effective unit which, if Robert Lewandowski can rediscover his scoring touch, could be the tournament dark horses.

Jakub Błaszczykowski’s second half goal ensured that Poland would finish runners-up, regardless of what happened in the group’s other match between Northern Ireland and Germany

Man of the match:
Ukraine captain Ruslan Rotan did what he could to drag his side back into the game and it was a reflection of his efforts that Ukaine were able to pin Poland back in their half for much of the second half.

This is the third time Poland have played in the European Championships, but the first time they have made it out of the group stages.

Talking point:
With 13 goals Robert Lewandowski was the leading scorer in the qualifiers. The Bayern Munich forward has yet to hit the target in France, but if he rediscovers his goalscoring form, Poland will not be afraid of anyone.