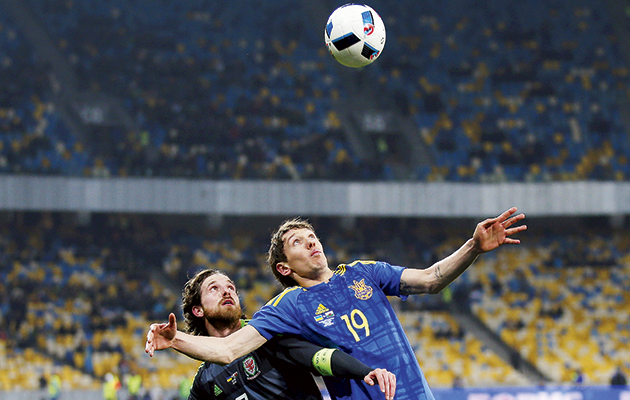 Ukrainians aren’t overly optimistic about the chances of the national team at Euro 2016. Few think Mykhailo Fomenko’s side will qualify from their group.

Most believe that his team is composed of too many old players, such as left-back Vyacheslav Shevchuk and captain Ruslan Rotan, who will be 37 and 34 respectively by the time the finals get underway.

Hopes are mostly pinned on a pair of attacking wingers: Yevhen Konoplyanka, who plays in Spain for Sevilla, on the left; and inventive Dynamo Kiev wide man Andriy Yarmolenko on the right. They, however, are rare standout performers in a squad packed with average players.

“I think during Euro 2016 there won’t be much beautiful football,” admits Yarmolenko. “Every team will be focused on getting the necessary result. We are set up for this kind of football.”

The head coach has been criticised for being too cautious, with a clear preference for defence over attack. But he maintains the support of the federation. “Fomenko is a good motivator,” says federation president Andriy Pavelko. “There are no problems in the dressing room and all the players are ready to fulfil the ideas of the head coach in France. The minimum task for Fomenko [to secure a new contract] is to qualify from the group.”

It remains to be see whether that is a realistic objective. Ukraine open their campaign in France against world champions Germany, while their best chance for points will be in their second game, against Northern Ireland, before they finish the group stage by taking on their 2012 co-hosts, Poland.

In the qualifying campaign, there was a clear gap between Ukraine and the group’s top two teams, Spain and Slovakia, leaving Fomenko’s men to negotiate a play-off against Slovenia in order to squeeze through as one of the final 24 teams.

The main problem the current Ukraine side faces is that there is little competition within the squad for first-team places.

Hard-working midfielders such as Denys Garmash and Serhiy Sydorchuk, along with Rotan, will ensure that Ukraine are industrious competitors. But there is likely to be little to admire in attack, where Dnipro’s Roman Zozulya will be the team’s main striking option despite only recently returning from a long injury lay-off.

Konoplyanka and Yarmolenko are the clear attacking aces. Both dictate the pace of the game, are good dribblers and very effective on the counter-attack. Konoplyanka, in particular, has great vision, while Yarmolenko is the current side’s top goalscorer, with 23 to his credit.

There is hope that Andriy Shevchenko, who has replaced Oleksander Zavarov as assistant coach, may help to change things for the better and the legendary striker is adamant that the team will not become tournament whipping boys, at least not in the group stage.

“We had quite a strong side four years ago, but were unable to qualify from a tough group with England, France and Sweden for a mixture of different reasons,” explains Shevchenko. “The current side is taken from quite a large group of experienced players and some exciting young talents.

“Therefore, it will be ‘mission possible’ to qualify from the group and thus achieve better results than in 2012.” 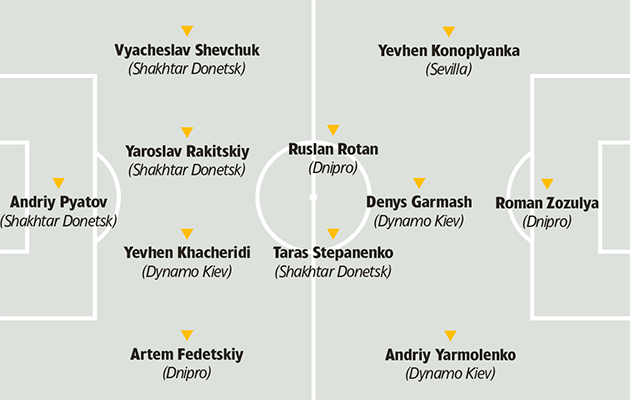 Mykhailo Fomenko prefers a 4-2-3-1 formation with clear emphasis on defence. The first-choice keeper is the experienced Andriy Pyatov, with a central defensive axis of Yaroslav Rakitskiy and Yevhen Khacheridi, 37-year-old Vyacheslav Shevchuk at left-back and Artem Fedetskiy on the right. Both wide players are used to playing an attacking role with their clubs, but Fomenko asks that they first fulfil their defensive tasks, limiting their potential to push forwards.

Yevhen Konoplyanka and Andriy Yarmolenko patrol the flanks, often playing deep in their own half with the instruction to mastermind rapid counter-attacks. Both are skilful and inventive, not only in passing the ball, but also leading the attack.

The holding midfield roles belong to Taras Stepanenko and the team captain, 34-year-old Ruslan Rotan. However, both lack pace and are often late in the tackle, risking yellow and even red cards.

Dynamo Kiev attacking midfielder Denys Garmash works hard behind a lone target man. His priority is to link the play, making a special effort to connect with Konoplyanka and Yarmolenko. Garmash reads the game well and his decision-making is good.

Fomenko has limited choice in the forward department. All three candidates – Yevhen Seleznyov, Roman Zozulya and Artem Kravets – are hard-working but lack a poacher’s instinct. The energetic Zozulya, from Dnipro, looks the likeliest option, with his whole-hearted commitment and ability to keep running until the final seconds. 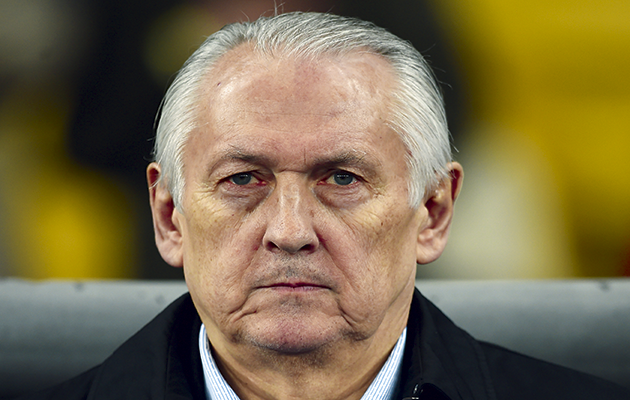 Mykhailo Fomenko
Age 67 (19.09.48)
A defender in the Dynamo Kiev side that won the 1975 European Cup-winners Cup and then beat Bayern Munich over two legs in the UEFA Super Cup.

In 1993, he coached Dynamo to the Ukrainian double then resigned, and for 20 years took a variety of modest jobs, including Guinea’s national side and Russian club Salyut Belgorod.

He was appointed coach of Ukraine following Euro 2012, and after qualifying for Euro 2016 had his contract extended until the end of the finals.