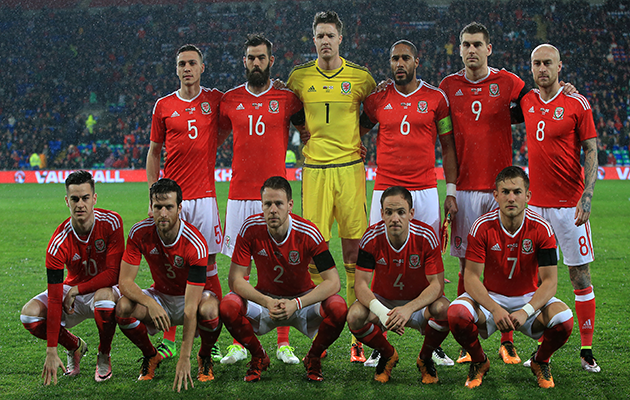 Chris Coleman delayed naming his final 23 to the last moment to allow midfielder Joe Ledley time to recover from a broken bone in his leg.

Adam Matthews, Paul Dummett, Emyr Huws and Wes Burns were cut from the provisional squad when the final 23 was named.

Despite injury concerns, David Edwards was named in the 23, as was veteran midfielder David Vaughan as Coleman opted to take an extra midfielder.

Wayne Hennessey
56/0
Crystal Palace (Eng)
Age 29 (24.01.87)
Firmly established as first choice, he possesses fine shot-stopping reactions and would have earned even more caps but for a year out with successive knee-ligament injuries.

Danny Ward
1/0
Liverpool (Eng)
Age 22 (22.06.93)
Impressed while on loan at Aberdeen earlier this season and has now established himself as secodn choice at Anfield.

James Chester
10/0
West Bromwich Albion (Eng)
Age 27 (23.01.89)
Came through the ranks at Manchester United before winning international recognition, while at Hull City, through a Rhyl-born grandmother.

James Collins
46/3
West Ham United (Eng)
Age 32 (23.08.83)
The veteran of the squad and the only one to make his debut under Mark Hughes. Not as comfortable on the ball as others but dominant in the air. Began his career with Cardiff City as a striker.

Ben Davies
19/0
Tottenham Hotspur (Eng)
Age 23 (24.04.93)
Left-back who has impressed after being pushed inside as a third centre-back during qualifying.

Chris Gunter
66/0
Reading (Eng)
Age 26 (21.07.89)
Right-back who can also cover in the centre. Plays his club football at Championship level but has plenty of international experience.

Jazz Richards
9/0
Fulham (Eng)
Age 25 (12.04.91)
A midfielder who has has been converted into a full-back. One cousin, Tobias Webb, is a super-middleweight boxer and another, Eli Walker, is a Wales rugby union international winger.

Neil Taylor
27/0
Swansea City (Eng)
Age 27 (07.02.89)
Committed defender with natural passing ability he was born in St Asaph – the same birthplace as Ian Rush – and has Indian heritage through his mother, who is from Kolkata.

Ashley Williams
58/1
Swansea City (Eng)
Age 31 (23.08.84)
Captain who made his debut while in the English third-tier with Stockport County. Provides a mix of physical edge and classy distribution.

Joe Allen
25/0
Liverpool (Eng)
Age 26 (14.03.90)
Was Wales’ most expensive player before Bale. Sits deep, both as a defensive screen and a key man in possession. His brother, Harry, has represented Wales’ deaf side.

Andy King
32/2
Leicester City (Eng)
Age 27 (29.10.88)
Former Chelsea trainee, who qualified for Wales through parents or grandparents. A former Under 21 international with a natural attacking game who can be deployed wide or in midfield.

Joe Ledley
61/4
Crystal Palace (Eng)
Age 29 (23.01.87)
Combative and energetic, he who won three Scottish titles with Celtic. Made his debut in 2005 and his friendly goal against Holland in November was his first in five years.

David Vaughan
42/1
Nottingham Forest (Eng)
Age 33 (18.02.83)
Combative midfielder who played in the Premier League for Sunderland. Made his senior debut back in 2003.

George Williams
7/0
Fulham (Eng)
Age 20 (07.09.95)
A natural attacker who was used wide in the qualifying campaign before suffering knee-ligament damage. Wanted by England before making his competitive Wales debut.

Jonny Williams
11/0
Crystal Palace (Eng)
Age 22 (09.10.93)
Nicknamed “Joniesta” by Palace fans on his emergence for his style of play and close control, he recovered from serious injury to play his role in qualification.

Gareth Bale
54/19
Real Madrid (Spa)
Age 26 (16.07.89)
The world’s most expensive player, he has deadly pace, power and left-foot accuracy to match. He is his country’s fifth leading scorer and is just nine behind record holder Ian Rush.

Simon Church
35/3
MK Dons (Eng)
Age 27 (10.12.88)
On loan to Aberdeen to get game time, he has suffered with injury problems but has a good work ethic. Scored three times against current England keeper Joe Hart in a two-legged under-21 play-off games in 2008.

Hal Robson-Kanu
30/2
Reading (Eng)
Age 27 (21.05.89)
England under-19 who switched allegiance to represent the land of his grandmother. A winger at club level, he has been transformed by Coleman into a striker whose mobility and work-rate provides space for Bale.