“Win it for Cristiano Ronaldo” said Pepe, and Portugal did just that

Pepe says he implored his team-mates to “win it for Cristiano Ronaldo” as Portugal defeated France in Sunday’s Euro 2016 final without the help of the talismanic captain, who was replaced early in the game after picking up a knee injury.

Ronaldo was injured after suffering a hefty challenge from Dimitri Payet and, having initially attempted to play on, eventually limped off midway through the first period in tears. Ronaldo returned to the bench and was a visible and audible presence in the technical area alongside coach Fernando Satos. 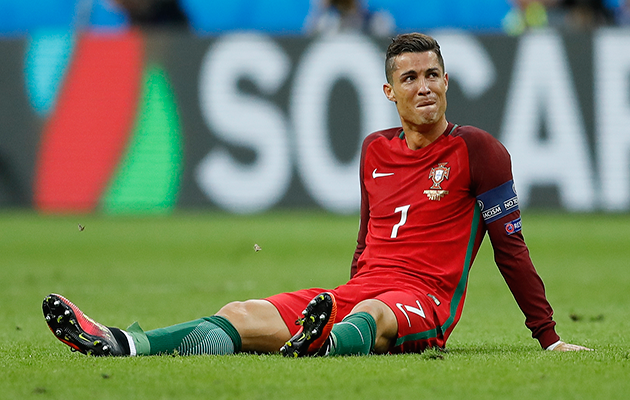 Cristiano Ronaldo sits onthe pitch unable to carry on after picking up a knee injury.

“This was tough because we lost our main man and we’d pinned all our hopes on him,” said Pepe. “Cristiano’s a player who can score a goal at any second but, when he said he couldn’t go on, I told my team-mates that we had to win it for him; that we were going to fight, to fight for him. At the break the manager set us up very well, strategically speaking, and implemented Plan B. It worked.

“We put blood, sweat and tears on the pitch. I said on the eve of this game that we’d leave it all on the pitch for our people, for our nation, and that’s what we did. That’s what the Portuguese are about: humility, work, overcoming hardship. We represented our country as best we could. Regardless of those who doubted us, and the criticism we’ve had here in France for our performances, we had our goals set out for us and this was the goal. 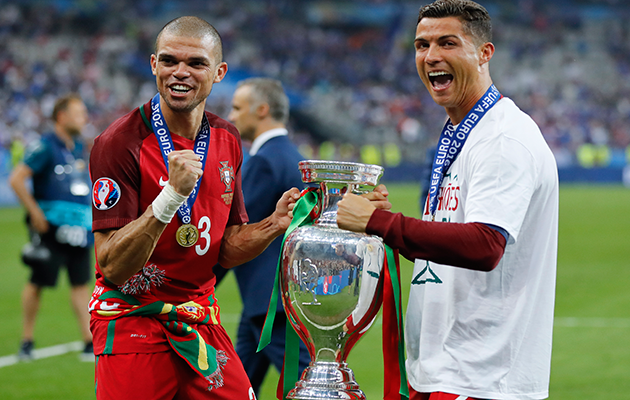 Pepe and Cristiano Ronaldo with the European Championship trophy.

“The manager is a very intelligent man. He has been able to blend youngsters with the more experienced players. From day one he said the first goal is to qualify for the Euros and the second is to win it. We managed both things. This is not down to chance. This comes from hard work. We listened and all pulled in the same direction and now we’ve written a brilliant page in the book of Portuguese football history. No one will ever forget this victory.” 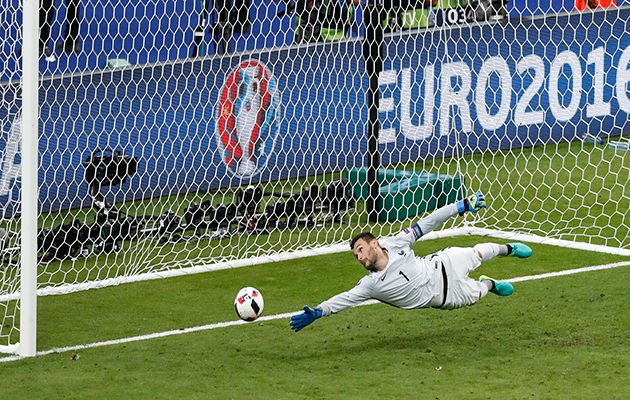 France goalkeeper Hugo Lloris is beaten by a low shot from Eder.

The match-winner, Eder, who appeared as a second-half substitute for Portugal, was given a boost of confidence by Ronaldo.

“Cristiano told me I would score the winning goal for the team,” he said. “He gave me this strength, this energy, and it was vital. It was a goal I’ve been working for from the first minute of the Euros.” 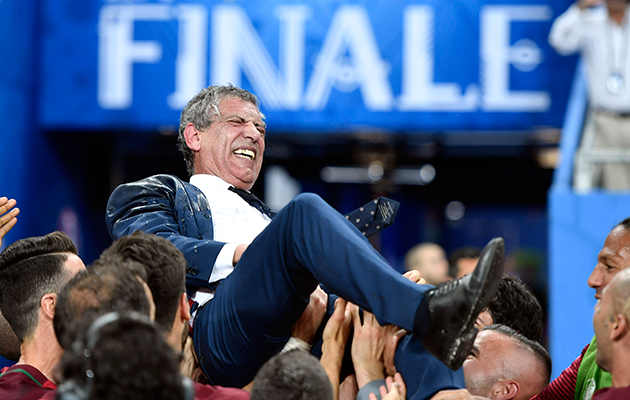 Portugal coach Fernando Santos celebrates with his players after the 1-0 victory over France.

“He told me he would score when I sent him on,” said Santos, whose side won only once in 90 minutes all tournament and were criticised for their negative tactics.

“The ugly duckling went and did just that. Now he’s a beautiful swan,” the coach added.

“As for Ronaldo, twice he tried to carry on but he couldn’t. Personally I think the referee should have shown a card [to Payet for his challenge], yet he didn’t even give a foul.

“Anyway the way Cristiano spoke to us and reached the lads, motivating them, in the changing room and in the dugout … he believed that tonight was going to be our night. On his behalf I’d like to thank all the players for believing. We were as simple as doves and wise as serpents. I thank them all.”