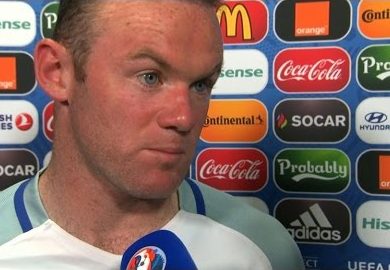 England drew with Russia last night, and Wales grabbed a victory against Slovakia leaving them at the top of Group B in Euro 2016.

Bale scored a fine free-kick yesterday, and Rooney described him as one of the best players in the world, but said England could not afford to give their attentions on him as Wales have other dangerous threats.

“We have to stop other players, you can’t just focus on Gareth Bale. We’re not going to double team him,” said Rooney.

England were controlling the game last night but could not improve on their lead, with Rooney impressing in midfield, before being taken off by England manager Roy Hodgson.

He added: “We have to just think about the next game, and playing the same way we did tonight, on Thursday.”

Meanwhile Wales manager Chris Coleman said that his team have nothing to fear on Thursday against England and can carry on the momentum from yesterday’s victory.

“We’ll enjoy these moments in this competition if we do what we did today,” said Coleman.

“It’s not coming here and enjoying it, and going home making excuses about it being our first tournament.

“There’s nothing to be afraid of, even if sometimes you are afraid of the unknown.

“We just have to go about our business and, if we do that, there’s every chance that we will get what we need.

“We know we’re up against it in the next game.

“We are the underdogs, England are a top-10 team, and they are used to high-pressure situations.

“But that could work to our advantage, and if we are ourselves it can be enough to get what we want.”