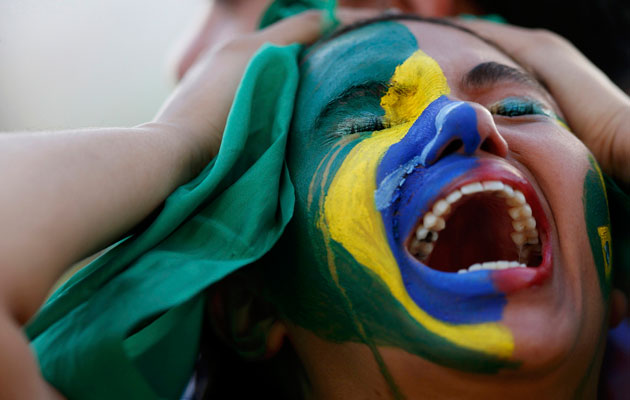 It’s all over in Brasilia. Holland have won a game they didn’t want to play at a canter. Brazil have been desperately disappointing again. Scolari’s substitutions were uninspired and he will surely be packing his bags this evening.

Brazil were unlucky to see Oscar booked for a dive when he was clearly tripped by Daley Blind in the penalty. There was physical contact to the extent that Blind had to be carried off on a stretcher, yet no penalty was awarded. Oscar had been guilty of diving earlier in the game, but not on this occasion.

Fernandinho has replaced Luiz Gustavo for the second half. That’s the same Fernandinho who was withdrawn at half-time against Germany because he was having such a stinker.

Boos ringing around the stadium in Brasilia as Brazil head into the break two goals down. The Dutch are in complete control. Not sure what Brazil can do to turn it around.

Meanwhile, Argentina coach Alejandro Sabella is talking to the media at Maracana stadium, ahead of tomorrow’s Final against Germany.

The main line is that Angel Di Maria could play a part in the match but will have scans to assess the extent of his injury. “We will evaluate Di Maria today to see how much he has improved. I will get a better picture after our practice.”

Wesley Sneijder pulled up in the warm-up, so Holland started with Jonathan De Guzman in midfield

Holland have a second. Wijnaldum’s cross from the right was headed away by David Luiz, but only as far as Daley Blind, unmarked on the penalty spot. Holland’s left wing-back had time to chest the ball down and place a smart half-volley past Julio Cesar. Shocking defending from Luiz, again.

Robin Van Persie has converted the penalty, hitting his shot high and to the side of Julio Cesar.

Arjen Robben is pulled back by Thiago Silva in the second minute. Brazil’s captain is booked for the foul, which happened right on the edge of the area. But the referee Djamel Haimoudi has given the penalty anyway.

It’s off to Brasilia for the game that nobody wants to play. Hosts Brazil face Holland in the third-place play-off.

Brazil coach Luiz Felipe Scolari has made a host of changes to the side that was humiliated by Germany in Belo Horizonte. Jo starts at centre-forward instead of Fred, while Maxwell starts at left-back instead of Marcelo. Paulinho replaces Fernandinho in midfield and Willian starts instead of Bernard. Lastly, captain Thiago Silva is back from suspension.

Holland coach Louis Van Gaal, who said he didn’t want to play the game, has stuck with most of the side that lost to Argentina in the semi-final. Jordy Clasie comes in for the injured Nigel De Jong, while Dirk Kuyt is likely to start at right wing-back.