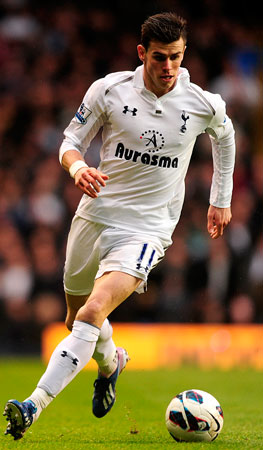 The midfielder’s performances for Spurs have taken him to a new level this season – as indicated by his regular appearances in the ESM Team of the Month. And despite a worrying collection of yellow cards for perceived diving, he remains favourite to be PFA and FWA Player of the Year.

But even though his side remain on course for a Champions League place next term – which is an important benchmark to satisfy the ambitions of the Wales international – the pulling power of Europe’s elite has heightened speculation that a move will happen at some point.

Even with the uncertainty over the identity of their coach next term Real Madrid head the list of his admirers, along with Manchester United.

Tottenham chairman Daniel Levy is a famously tough negotiator and he will go into any negotiations safe in the knowledge that Bale is under contract at White Hart Lane until 2016 – unlike Croatian midfielder Luka Modric, who joined Madrid last summer after entering the final year of his contract.

Bale is still only 23, and with recent fatherhood to contend with, another season at Spurs is a more likely option than a move away this summer. However, that will not dampen the speculation, nor keep a possible transfer fee within sensible limits.

Has found it hard to maintain last season’s high goalscoring standards, but continues to have a substantial following in the Premier League. A €15million buy-out clause may be a deterrent.

Flamboyant as he is hard working and decisive in front of goal, the Gabon striker makes no secret of the fact that he wants to be in a new championship come August.

The Basque midfielder has been behind much of his side’s best play in recent times, but a ¤20million buy-out clause is likely to deter most suitors.

With the greatest of respect to relegation-threatened Villa, the Belgium international target man who joined from Genk last summer deserves a more prominent stage.

The in-form Ivorian striker looks set to quit the Eredivisie and top names in Russia would gladly throw any amount of petro-dollars in his direction. His preference, however, is to play in England or Italy.

He boasts a great goalscoring record in French football, but has no future at PSG now that he dwells in the shadow of Zlatan Ibrahimovic. Valencia have followed him for a while.

After losing his place to Javi Martinez, the Brazilian defensive midfielder is contemplating a new chapter elsewhere. An energetic enforcer who has lost a little value since joining Bayern in 2011.

In sparkling goalscoring form for Bayer this term, he could replace Robert Lewandowski at Borussia Dortmund. Also attracting interest from the Premier League and Dynamo Kiev.

After falling behind Lucas, Javier Pastore and Ezequiel Lavezzi in the attacking-third hierarchy at PSG, the versatile France international apparently has told his agent to find him a new home.

The French centre-back might have turned up his nose at an offer from Anzhi, but will not prove so hard to convince if a leading Premier League side tempted cash-strapped Valencia with a decent offer.

Milan are keen on the midfield general who has gone from strength to strength in the past two years. A battle of wills looks inevitable as Galatasaray describe him as “untransferable”.

The Wales international centre-back has impressed as captain of the League Cup winners. Arsenal and Liverpool would both pay the £8million needed to prise him away.

The Dutch midfielder is due to return to Barca at the end of his season-long loan at Schalke, but having proved his fitness following serious injury there will be any number of Premier League clubs willing to hire him.

The Colombian full-back, who is on loan at Fiorentina, could be the latest “investment” to reap a dividend for his parent club. Jose Mourinho is said to be a fan.

The Belgian midfielder is admired by Chelsea and both Manchester clubs. They will come calling if Everton fail to finish in the top four.

The Montenegrin attacker has a few years left on his contract so only a hefty fee will tempt Fiorentina. But Arsenal, with a rebooted transfer kitty, head the list of admirers.

The forgotten man of Stamford Bridge has been training with Chelsea’s reserves as he sees out the last year of his contract.

After his aborted attempt to join QPR in the January window, a parting with West Brom seems best for all concerned. Wage demands may prove a sticking point, though.

The French right-back is coming to the end of his time in London. A return to his homeland beckons.

The Brazilian defender has never been more than a bit-part player in Dortmund. Covering for the injured Nevan Subotic recently may have given him the appetite for more.