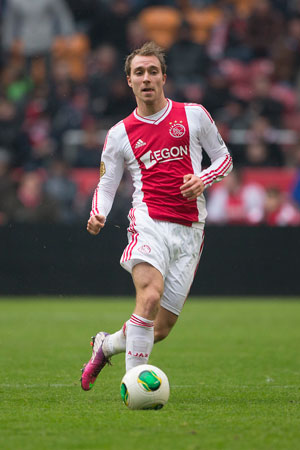 The Danish midfielder is likely to leave Amsterdam this summer after declining the offer of a new contract. The 21-year-old will attract interest from Premier League clubs Tottenham Hotspur and Liverpool, while Barcelona have a long-standing interest in the player.

Ajax, though resigned to losing Eriksen, will accept a fee of around £15million safe in the knowledge that another Danish whizz-kid, teenager Viktor Fischer, is coming through the ranks in Amsterdam.

Close to moving to Fenerbahce or Internazionale in January, the Moroccan had to stay put because of disagreements over the fee. A big-time switch to England, Italy or Spain beckons.

With over 150 French top-flight games under his belt, the attack-conscious 22-year-old right-back seems certain to join either a bigger Ligue 1 team, such as Lyon, or try his luck abroad.

The central defender looks great value for money at just £8million and has built up a following among English scouts. But they will need to move quickly as Russian clubs are also circling.

According to France Football, a Manchester United scout was following the left-back’s performance during a recent France Under-20’s game. PSG are on the case too.

Earning plaudits for his goalscoring prowess in Portugal, the Marseille-born Franco-Algerian striker has a growing fan-club in Ligue 1 and in England. The 22-year-old represents a snip at €1million.

Held in very high regard in Spain – Barcelona and Real Madrid have made enquiries in the past – but the 21-year-old French left-winger could be on his way to the Premier League.

The midfielder penned a new contract at the turn of the year – which upped his release clause to ¤35million in readiness for a lucrative sale to Manchester City or Real Madrid.

Available for between €15 and €20million, the athletic France Under-21 central defender looks all set to be heading for Milan, according to the Roman daily Corriere delo Sport.

Barcelona are reported to be prepared to shell out €25million to secure the services of the Brazilian teenage centre-back, but Chelsea are also keen. Roma will surely not refuse such a fee.

The Colombian winger will not come cheap as he is the subject of an eye-watering €45million release clause. Not that it will put off the likes of Manchester United, PSG or Real Madrid.

Despite the agent of the South Korean attacker speaking of “weekly contact” with big-name sides in England, Hamburg remain hopeful of extending his contract to 2016.

On Marca TV a presenter recently insisted the Germany international had signed a pre-contract with Barcelona. While he may move this summer, the 20-year-old is more likely to wait until 2014.

The left-winger recently broke into the senior Ghana side and is being watched by Premier League clubs.

The France international midfielder is being tracked by a number of leading English clubs, including Arsenal.

The England Under-21 winger, son of the recently appointed Blackpool manager Paul, almost re-joined Liverpool in January and will do so this summer if a fee can be agreed.

The Moroccan-born Holland international is wanted by PSV and Ajax but they may find themselves gazumped by an English club.

The versatile Holland international defender is being watched by a clutch of clubs and Feyenoord may not be able to resist an offer in the region of £6million.

The teenage midfielder has already made his senior debut for Greece and his progress is being followed by a number of clubs in England and Germany.

The Ireland midfielder has shone in a relegation-threatened Wigan side this season. Bigger clubs in the Premier League are eyeing him up.

The Colombian attacker starred at the South American Under-20s and is tipped to move to a bigger Serie A club this summer.

Arsenal head the list of those club’s ready to sign the star of Celtic’s run to the last 16 of the Champions League.