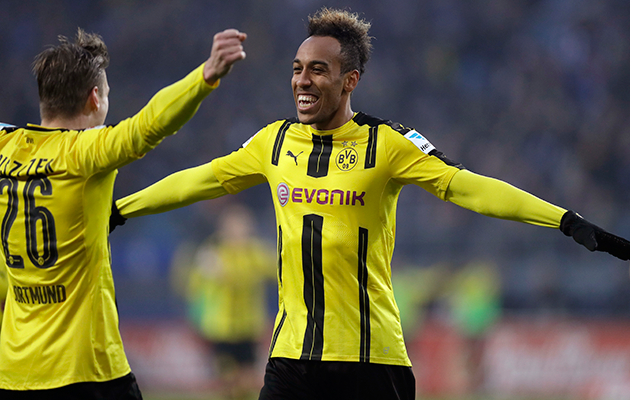 1. Aubameyang’s mea culpa
Left out of the Dortmund squad on disciplinary grounds for last week’s Champions League victory over Sporting of Lisbon, pyrotechnic goleador, Pierre-Emerick Aubameyang said sorry in style on returning to the Schwarz-Gelben fold on Saturday, scoring no fewer than four goals in the 5-2 road trip rout of hapless Hamburg.

Aubameyang, temporarily sent to the naughty step for making an unauthorised trip to Milan, needed less than thirty first-half minutes to complete his hat-trick and in the wake of his first goal made a point of rushing to the sidelines to embrace coach, Thomas Tuchel.

“I know that I made a mistake and wanted to apologise to the team and, above all, the coach,” declared the African Player of the Year in a post-match interview with Sky Deutschland.

Some have been quick to describe Aubameyang’s ‘misdemeanour’ as his first step towards the Dortmund exit, that he already has one eye on a lucrative move to Spain or England and could not care less what the powers-that-be at the Westfalenstadion think.

Not so. He’s simply a free-spirit. Sometimes too impulsive for his own good.

2. Flawed Bayern shocker
So used to winning at a canter in the domestic arena, Bayern Munich suddenly are looking more than a little vulnerable.

Although still undefeated in the Bundesliga, they were most unconvincing in the 1-1 home draw with surprise high-flyers Hoffenheim on Saturday and now have been joined at the top of the table by the ever-improving new boys of RB Leipzig, whose 3-1 victory over Mainz was their seventh maximum point haul of the season.

Sporting environmentally-friendly shirts made from recycled plastic waste retrieved from the ocean, Bayern’s first-half display against Hoffenheim also had that ‘washed up’ feel. Sluggish, morose and uninspired. Two factors in particular, will be of concern to coach Carlo Ancelotti.

Exhibit A: Bayern’s extreme discomfort when subject to an aggressive high press. Exhibit B: Their general lack of tempo, precision and creativity in attack. A meandering state of affairs in stark contrast to the intensity and dominance of the Pep Guardiola era.

Tellingly, Bayern’s only signature on the weekend score-sheet was an-own goal and it’s no accident that such a natural marksman as Thomas Müller has yet to score this term. Bayern are not playing as slickly these days and though not a crisis, could develop into one.

3. Ismael and Wolfsburg: the 90 minute clincher

Three weeks after stepping into the breach as Wolfsburg caretaker coach, former club Under 23 boss, Valerien Ismael has been given the job on a permanent basis.

Since taking over from the cashiered Dieter Hecking, the 41-year-old Frenchman has had mixed results, his side losing to Darmstadt and Leverkusen and winning 3-0 at  Fortress Freiburg at the weekend, only the Wolves’ second victory of the entire campaign.

Wolfsburg CEO, Klaus Allofs quite rightly was full of praise for the team’s performance in Freiburg, particularly enthused by the solidity of the defensive unit and energetic pressing game.

But by no means was Ismael his first choice. In a perfect world, Allofs would have preferred a external solution, the appointment of up-and-coming Hertha Berlin coach, Pal Dardai, ex-Belgium leader, Marc Wilmots, the much-travelled Portuguese, Andre Villas-Boas or the former Gladbach supremo, Lucien Favre (now at Nice).

Unable to land any of them, Allofs finally had to stick with the status quo. In short, making do.

4. Kauczinski KO
Embattled Ingolstadt are looking for a new head coach after dispensing with the services of Markus Kauczinski, who in his ill-fated four months in charge of the ‘Schanzer‘ failed to muster a single Bundesliga win.

Appointed on the basis of his excellent work in the second division with Karlsruhe, Kauczinski was, in many ways, a breath of fresh air: honest, authentic and jargon-free. But clearly was in no position to plea for patience from his employers.

With just two points in the bag this term from a possible thirty and his defence as porous as a sieve – Saturday’s 2-0 loss at home to Augsburg was the ninth consecutive game in which they had conceded at least two goals – something had to give. And that was poor Kauczinski. The truth is that the latter was fighting a losing a battle from the very start.

Brand new to the Bundesliga; out of his Karlsruhe comfort zone – where he had coached at various levels for the previous 15 years – and having to succeed the brilliant Ralph Hasenhüttl, the Austrian responsible for  transforming Ingolstadt from second tier no-hopers to respectable elite force. Kauczinski is not a bad coach.

5. Much pain, no gain
Gladbach and Germany wide-man, Patrick Herrmann must be wondering exactly what he has done to incur the wrath of the sporting gods.

The speedy 25-year-old spent much of last season recovering from torn cruciate ligaments in his left-knee and now faces another spell in rehab after severely damaging his right ankle in his side’s 3-0 loss to a rampant Hertha Berlin on Friday.

One of the Bundesliga’s brightest stars in 2014-15 and a serious candidate to feature for the Nationalmannschaft at Euro 2016, Hermann will be out for at least three months and that means the best part of two seasons an injured reserve. A tragic tale for one so talented.