1. Bayern toppled
No prizes for guessing the source of the barely-audible hissing noise to be heard in the Bayern Munich corridors of power in the wake of Saturday’s 1-0 loss to Dortmund. Listen carefully. It’s sound of punctured invincibility and deflated egos.

All in all, a nightmarish weekend for the Bavarian aristocrats. Not only tasting defeat for the first time this season and surrendering bragging rights to their Ruhr arch-rivals. But also relinquishing top spot in the Bundesliga table to the newly-promoted usurpers of RB Leipzig.

To suggest that Bayern are in unchartered territory would be an understatement. After 39 matchdays or 425 days in pole position, Germany’s biggest club now have a new, stark reality to adjust to – a competition with competition.

Former Bayern skipper turned pundit, Lothar Matthäus rightly opined that the champions’ performance against the Dortmunder “lacked fitness, zest and spontaneity” and it’s been clear for a number of weeks that two players in particular are struggling. For all his intelligence, vision and ability to pick out a pass, Spanish veteran Xabi Alonso often is found wanting when in a foot race or pressurised, while attacking-third ace star, Thomas Müller, usually so self-confident and bold, is in the worst slump of his stellar career, without a Bundesliga goal since April.

Worrying moments for new coach, Carlo Ancelotti, who since taking over from Pep Guardiola in the summer, has seen Bayern regress in certain areas, notably their fluidity and capacity to improvise. 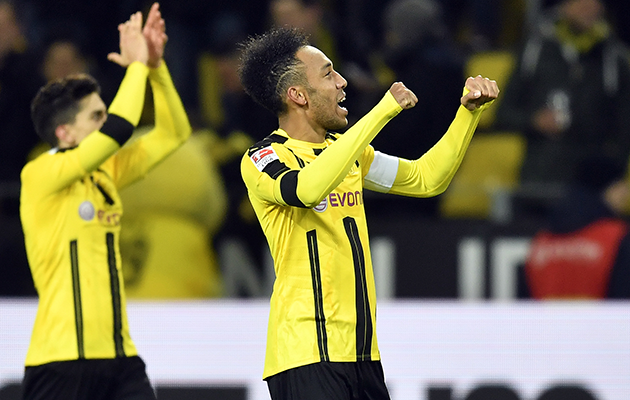 Pierre Emerick Aubameyang celebrates scoring the only goal of the game.

Now only three points adrift of second-placed Bayern and very much back in the title hunt, Dortmund’s morale-boosting victory in ‘Der Klassiker‘ had something of a Spanish feel to it.

Noting how Bayern were hustled out of their stride when losing to Atletico Madrid in a Champions League semi-final last season, ‘Schwarz-Gelben‘ coach, Thomas Tuchel ordered a fast and furious change of approach. A five-man back-line instead of their usual four; counter-thrusts rather than dominating possession and prioritising physical power and gutsy defending over silky techniqiue.

“We didn’t have a lot of the ball and our passing accuracy wasn’t great, but we never stopped running and were brutal in the way we defended,” declared Dortmund general manager, Michael Zorc, post-match. “It was a little bit like Atletico Madrid.”

Another key factor in tilting the balance towards the home team was Tuchel’s decision to go with two men up front: match-winning goalscorer, Pierre-Emerick Aubameyang and the Colombian, Adrian Ramos.

Besides their attacking duties, the pair were under strict instructions to shut down the creative instincts of Bayern’s ball-playing centre-backs, Mats Hummels and Jerome Boateng. And how well the plan went, with both Hummels and Boateng constantly misplacing passes.

Full marks to Tuchel, who prior to the weekend, had never beaten Bayern as Dortmund boss. 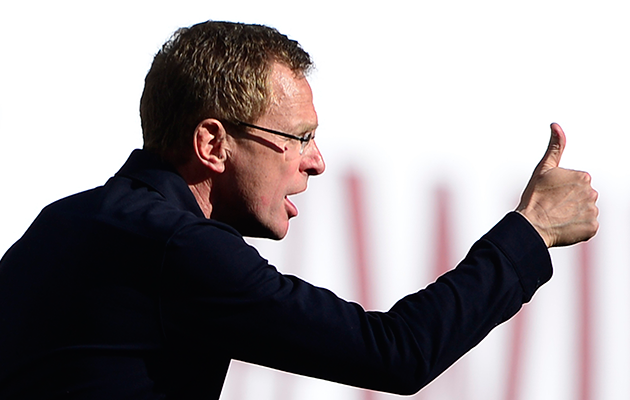 The first-ever promoted side to start a Bundesliga campaign with an eleven-match unbeaten run, RB Leipzig won their sixth consecutive game on Friday night, twice coming from behind to secure an excellent 3-2 victory at Leverkusen.

RB director of sport, Ralf Rangnick – who in 2008-09 famously coached Hoffenheim to the Autumn Championship – felt compelled to compare the Leipziger success story with Leicester City’s stunning English title last season and the pair do share much common ground. The high-energy playing style, band of brothers esprit de corps, relatively little first-eleven rotation and general complacency of their opponents, assuming the so-called underdogs eventually will run out of steam. A misplaced belief if ever there was one.

Fearless and hungry, they simply refuse to buckle, their steely state of mind exemplified by the seven goals they have netted in the last quarter-of-an hour this term. Euphoria can be the most potent of natural stimulants and RB have it by the gallon.

4. Off the canvas and slugging again
After ending up on the losing side in each of his first five Bundesliga matches this season, new Schalke boss, Markus Weinzierl has to be delighted with the way his side has rallied, picking up 14 points since the start of October, remaining unbeaten in six and finally producing on the road, winning 1-0 at toothless Wolfsburg on Saturday.

Thanks to Weinzierl, a side which at the start of the campaign appeared composed of eleven ‘islands’, now is a fully-functioning 3-5-2 whole, meticulously-drilled, no diva behaviour allowed and particularly uncompromising defensively.

It’s been a five-star week for young Royal Blue midfielder, Leon Goretzka, starting for Germany in their recent friendly versus Italy, then scoring the only goal of the game in Wolfsburg.

5. Schubert and Gladbach: a symphony bound to be unfinished?
The storm clouds are growing ever darker above the head of beleaguered Borussia Mönchengladbach coach, Andre Schubert.

A 2-1 home defeat to Köln in the Rhine derby at the weekend was the the Foals sixth match without a win and though club director of sport, Max Eberl, publicly stands by his man (“Why should a head roll ? I want continuity, even when it goes lousy,”), the tongues of doom continue to wag.

Above all else what Schubert needs is for his players to find their shooting boots. Of the 53 goalscoring chances they have created this season, they have converted only eleven and for a side with an abundance of talented marksmen (Raffael, Lars Stindl, Thorgan Hazard, Andre Hahn) that’s not good enough.

Rooney falls off the wagon, but England’s culture of boozing is well established

Paddy Agnew’s Notes from Italy: with the league seemingly in the bag, Juventus’ thoughts turn to Europe