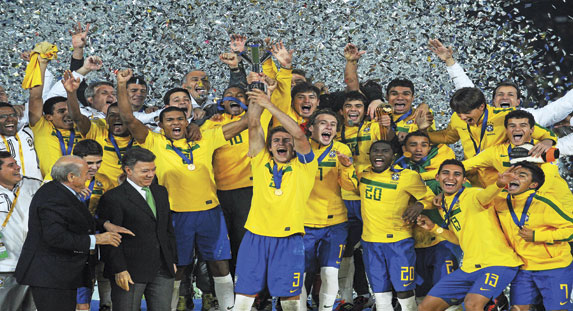 Three teams lit up the Under-20 World Cup – and none of them reached the semi-finals. As at the Copa America – when Argentina, Brazil, Chile and Colombia fell unexpectedly in the last eight – so it was here, and the tournament was left feeling slightly hollow as a result.

That is not to denigrate the achievements of Mexico or France, beaten in the semi-finals, and particularly not of Brazil and Portugal, the finalists, but the best football in Colombia was played by the hosts, by Spain and by Nigeria.

In the end, it was Brazil who won out, their attacking might overcoming Portugal’s defensive resolve. The goal that won it, completing Oscar’s hat-trick and making it 3-2 with nine minutes
of extra time remaining, was arguably a classic, the sort of goal that at senior level would be replayed for the rest of time. Or maybe it was a flukily mishit chip that sailed over Mika, the Portugal keeper, from the right side of the box. Oscar probably showed enough in the tournament to deserve the benefit of the doubt, but the goal summed up Brazil.

Are they a brilliant force, packed with skilful and creative players, unreliable and insistent
but shimmering with brilliance? Or are they a disjointed side that keep getting away with it because of the excellence of individuals such as Oscar and the centre-forward Henrique? Perhaps they are both, but what is certain is that it was Spain – or, perhaps more accurately, the Spanish model – that dominated the tournament.

Even against Brazil, when Spain were eliminated on penalties after a 2-2 draw, they seemed to be playing football far more advanced than that of their opponents, the ball rotated at pace through their 4-3-3. The substitutes seemed able to step into the whirl whenever required. Isco or Sergio Canales could each play at the front of the midfield. Canales and Daniel Pacheco both played on the right. Cristian Tello played on the left against Brazil, the position from which Alvaro Vazquez, swooping into the space created by Rodrigo, had scored four goals earlier in the competition. Only three players – the right-back Hugo Mallo, the centre-back Marc Bartra and Vazquez – played in all five Spain matches. The implication of that is chilling: Spain were as good as they were, despite trying to give everybody a game, and despite the fact that this was a squad largely flung together as priority had been given to the European Under-19 and Under-21 championships, both of which Spain won.

Similar things were said about France a decade ago, of course, only for them to be brought low
by issues of management and attitude, but the potential is there for this Spain dynasty to last several more years.

Brazil, by contrast, looked predictable, and that they took their quarter-final against Spain
to penalties was largely down to Oscar, Henrique and goalkeeper Gabriel. They had similar problems in drawing 1-1 with Egypt, another well-drilled and cohesive side who were unfortunate to concede two penalties against Argentina in their last-16 match. Brazil’s formation, with a midfield diamond, seemed narrow, and it was no coincidence that both Spain goals came from crosses from their full-backs.

Almost as significant as Spain’s performances was the stylistic influence they had over other teams. Both Nigeria and Colombia also set out with a 4-3-3 in which the central striker vacated his position to create room for the wingers cutting in, and at least one of the three midfielders was
a bona fide playmaker.

Nigeria were the highest scorers in the group stage, something only partly explicable by them being in the same group as Guatemala, who leaked 11 goals in their first two games, and Croatia, who ended the tournament looking thoroughly disinterested and even lost to Guatemala. Ahmed Musa, darting in from the left wing, was Nigeria’s most eye-catching player, but almost as important were the playmaker Abdul Ajagun and the captain, Ramon Azeez, who strode forward imperiously from the back of midfield to link the play.

When they faced a sterner defence in the second round, against England, Nigeria were rather less fluid, but they still did enough to deserve their 1-0 win. Their coach, John Obuh, who spent the tournament wearing a straw sombrero to honour the hospitality of the hosts, spoke of his frustration at the individualism and lack of cohesion his team had shown, and eloquently set out an attacking philosophy.

The contrast with Brian Eastick, the England manager, who had been forced into a defensive approach by dreadful preparations that saw 36 players made unavailable by their clubs, was clear. When Eastick spoke of Nigeria exhibiting a defensive naivety, two thoughts occurred: was he partly trying to justify his own tactical outlook, which had seen England battle through to the second round on the back of three goalless draws, and, more worryingly, was he dredging up an old stereotype? As it turned out, he was simply right, and Nigeria were picked off 3-2 by France
in the quarter-finals, the pacy Alexandre Lacazette scoring twice and Gueida Fofana adding a brilliantly guided lob-volley with the outside of his right foot.

France had an odd tournament, doing enough to beat South Korea and Mali to get through the group in second place and easing past Ecuador in the second round without ever producing the scintillating performances they had managed in Europe. And they were hammered 4-1 by Colombia in their opening game.

That was the high point of the tournament for the hosts. They had beaten France on penalties in the Final of the Toulon tournament but, even so, the way their forward line ripped the French defence apart was unexpected. The centre-forward Luis Muriel, left-winger Michael Ortega and playmaker James Rodriguez were all brilliant. There was a swagger and a class to Colombia and, with a packed crowd at El Campin driving them on, it was hard to avoid the thought that if they could maintain that level they would be unbeatable.

But they couldn’t. Colombia were proficient enough in beating Mali and South Korea, but they wobbled in the last 16 when, having taken the lead, they conceded two in quick succession to a typically open Costa Rica. A late header from Colombia captain Pedro Franco and an even later penalty converted by Rodriguez completed a 3-2 win, but the warning signs were there before their quarter-final against Mexico.

Mexico, with their 3-4-3 shape, had only flickered. At the back of midfield the shaven-headed Jorge Enriquez is a physical monster, a great driving leader, but his distribution was often awry. Carlos Orrantia, the right wing-back, was an energetic and intelligent present, while Ulises Davila, who dropped off the front line, showed flashes of inspiration to explain his lofty reputation. After defeat to Argentina and a win over North Korea, they had reached the knockout stages with a tedious draw against England. The last-16 clash with Cameroon was little better, and even those watching it in the stadium in Pereira spent most of  the game following Colombia’s progress against Costa Rica. Orrantia, sneaking in at the back post, found an equaliser within two minutes of Franck Ohandza’s opener, and the game went to penalties. Mexico scored their first three, Cameroon missed their first three, and it was Mexico who went on to Bogota.

Few gave them much hope, but they withstood a first-half pummelling and went ahead from a penalty seven minutes before the break. Duvan Zapata equalised as the Colombia surge continued, but the sub Edson Rivera headed in a corner to restore Mexico’s lead. Cristian Bonilla, the Colombia goalkeeper, was much hyped, but his poor foot movement was partly responsible for the goal, as he got a hand to the ball, but couldn’t get the purchase to turn it over the bar. He was similarly at fault for the third, Rivera’s serving long-range effort flying into the top corner off his elbow. Neither were howlers, and the Colombian press was broadly respectful – acknowledging, quite rightly, that the string of missed chances were equally to blame, but they were errors nonetheless.

The other quarter-final was a hideous goalless draw in which Argentina’s misfiring side never looked like breaking Portugal down. Like Brazil they were reliant on individual performances, and although Erik Lamela and Carlos Luque dragged them to the last eight with the aid of a highly dubious penalty award against Egypt in the last 16, they were helpless against Portugal’s stifling 4-1-4-1. A penalty shoot-out win meant that Portugal had made it through to the semi-finals by scoring three goals in five games and conceding none.

Their one player to have caught the eye was the holding midfielder Danilo of Greek side Aris, and he was instrumental in Portugal’s semi-final win over France, scoring their opener with a neat header and then being brought down for the penalty that Nelson Oliveira converted to make it 2-0 at half-time. France dominated possession in the second half, but the massed red shirts held firm.

Brazil also won their semi-final 2-0, but they did it the other way round, with an arduous struggle against a Mexico side who seemed a little overawed by the occasion and finally conceded two goals to Henrique in the final 10 minutes – a double which made him joint-top scorer in the tournament with Lacazette and Vazquez.

Brazil were more gifted than Portugal, that was clear, but the question was whether their narrowness would lead them simply to run at the heart of their opponent’s massed defence. When, after five minutes, Oscar’s free-kick floated over everybody, just brushing Sergio Oliveira on its way into the bottom corner, it seemed such considerations wouldn’t matter. But, within five minutes, Nelson Oliveira got in behind Brazil’s left-back Gabriel Silva and crossed for Alex to roll in. Gabriel Silva went off for Alan at half-time, but it was the same space Nelson Oliveira exploited just before the hour, being allowed to drive into the box and sending a low shot under Gabriel.

Brazil’s strength in the tournament had been their bench, with the likes of Dudu and the unpredictable Negueba in reserve, and it was Dudu who turned the game back Brazil’s way, a backheel spin defeating Julio Alves and setting up a shooting opportunity. Mika parried but Oscar was there to knock in the equaliser with 12 minutes to go. The Internacional midfielder’s true moment of glory, though, was still to come.

“Our victory is a real achievement,” said Brazil’s right-back Danilo, before acknowledging it had been based on individual brilliance. “We were 2-1 down, there was little time remaining, and Portugal are very difficult to score against. But fortunately for us Oscar came to our rescue. There are no words to describe his performance. He’s been outstanding for us all tournament.”

Did he mean his chip? Only he will know, but it sealed a victory for a side whose main gift, for all their individual talents, was simply their ability to keep going.