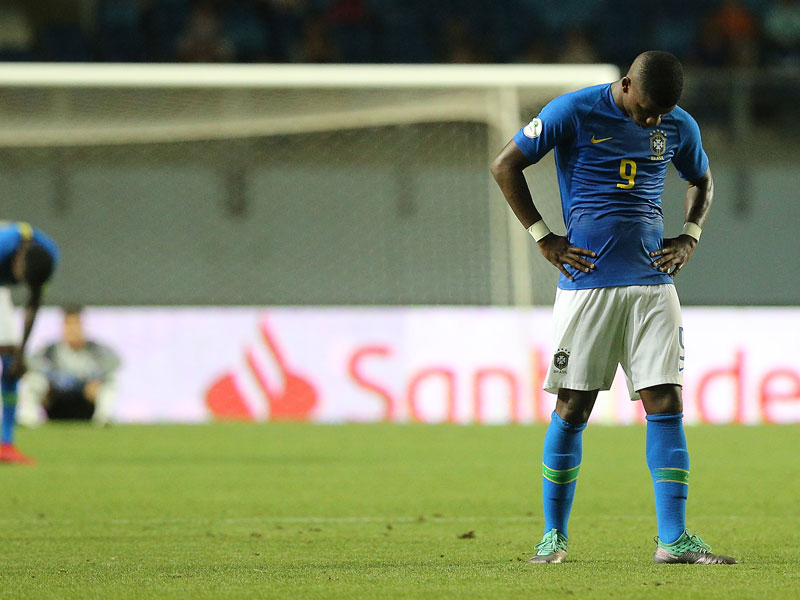 Eight years ago Neymar and Lucas Moura shone for Brazil in the South American Under-20 Championships. But they missed the World Cup at the level because they were with the senior squad for the Copa America. And so the stage was set for Oscar, Phillippe Coutinho and Casemiro to grab some of the glory as Brazil were crowned Under-20 world champions in Colombia.

Since then, however, the country’s record in Under-20 football has been dismal. This year’s South American Under-20 Championships, held in Chile, came to a conclusion on Sunday.  Ecuador won the title, followed by Argentina, Uruguay and Colombia. These teams will take the continent’s four slots in the World Cup, taking place in Poland this May and June. Brazil finished fifth. They miss out – for the second consecutive time and the third in the last four.

A final day 1-0 win over Argentina restores a little morale. But Brazil needed a three goal margin – a task that always looked beyond a team that managed just 6 goals in 9 games.

The occasional failure is only to be expected. The tournament happens every two years, and there are bound to be oscillations in quality between one group of youngsters and the next.  But three failures in four, stretching back to 2013, starts to look like a pattern.

This does not mean that good players are no longer being produced. The 2013 side included the likes of Fred and Felipe Anderson. Richarlison and Lucas Paqueta were colleagues in the 2017 squad. And the current group includes some names who will surely be able to shrug off this disappointment; attacking midfielder Rodrygo was a huge disappointment in Chile. Even so, he joins Real Madrid in the middle of the year. Barcelona have picked up strong right back Emerson, and will be loaning him to Betis. Busy midfielder Marcos Antonio will move from Estoril in Portugal to Shakhtar Donetsk. And Phelipe Megiolaro was probably the outstanding goalkeeper on show in Chile.

Brazil’s problem, then is surely less one of names, more one of ideas.

Their decline at Under-20 level can be seen as both relative and absolute.

There has been a general rise in standards. This is a spin off from the change introduced in 1996, one of the most important in the history of South American football. The switch to the marathon ‘one big group’ format of qualifiers for the senior World Cup was hugely significant. It brought the lesser nations the type of calendar that European national teams take for granted; regular competitive games, guaranteed income, the chance to hire better coaches and keep a team together.

This has now filtered down to the youth ranks. Countries have seen the importance of the Under-20 side as a conveyor belt through to the senior ranks. They invested more time and money in preparation – and the results were clear from this tournament in Chile. From the point of view of sparkling attacking football, revealing a generation of natural, instinctive talents, the tournament was a resounding failure. But the defending – both in terms of collective organisation and of individual quality – was impressive.  Teams have become harder to beat.

In their, highly successful, youth development work, Uruguay make a point of trying to identify players with the speed of movement, thought and technical execution to survive in top level football. In other words, they are not aiming to produce players for their domestic game.

But Brazil’s Under-20 teams, and the current one is an example, are full of the vices of the country’s contemporary club game. In particular, the team features a pair of gangling centre backs who offer little construction from deep – thus necessitating, until the panic stations of the final game, a specialist holding midfielder to sit in front and protect.  The fluidity of the team’s passing movements is thus immediately restricted. This is a common feature of Brazilian club football – as is the presence, in wide attacking areas, of some whose only thought is to charge forward in a straight line, also faithfully reproduced by the Under-20s in Chile.

The excuse might be trotted out that things would have been different had the likes of Vinicius Junior and Paulinho been released by Real Madrid and Bayer Leverkeusen respectively. Perhaps. But their presence would not alter the fundamental structure of the side, and, anyway, almost all the teams had important players missing for one reason or another.

Better, surely, to embrace the disaster. Failure is often an essential part of success. Maybe, for example, the Under-20 travails two years ago of Richarlison and Lucas Paqueta worked for the best, warding off complacency at an important moment.  Perhaps after three failures in four, the time has come for Brazil to have a complete rethink about their approach to Under-20 football.