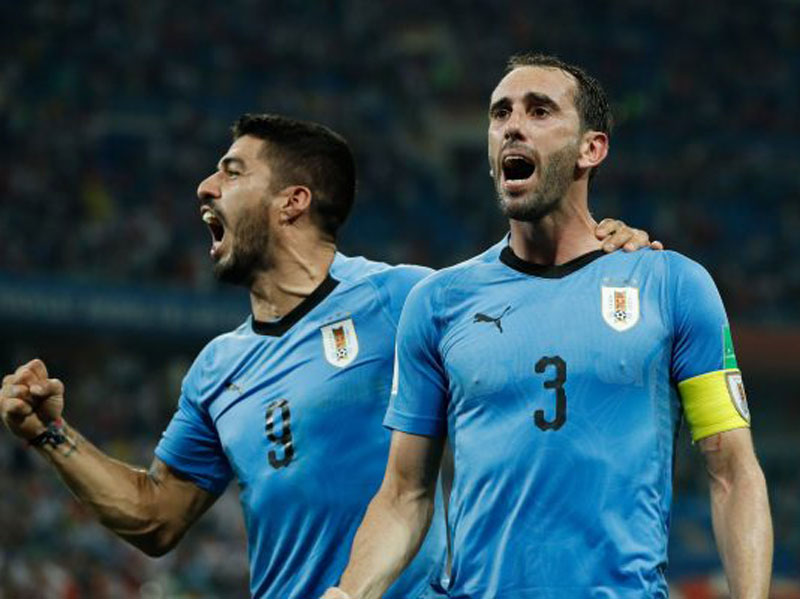 Uruguay have been eliminated from the 2018 World Cup.

France, with goals from Raphael Varane and Antoine Griezmann, edged past Uruguay to reach the semi-finals for the sixth time in their history.

The French rarely got out of second gear, but then they did not need to. Without injured striker Edinson Cavani, Uruguay’s plan was to close France down, restrict their movement and passing, and hope for a chance at a set-piece. Unfortunately, it was France who took their chance at a set-piece. After Rodrigo Bentancur’s foul on Corentin Tolisso, Griezmann played in a free-kick for Varane to open the scoring.

Uruguay were forced to chase the game but any chance of a revival evaporated when keeper Fernando Muslera fluffed Griezmann’s shot for France’s second goal.

Uruguay received more bookings (two, for Rodrigo Bentancur and Cristian Rodriguez) than the one (also for Bentancur) in all of their previous four matches.

Uruguay were angered by supposed play-acting by Kylian Mbappe, who fell to the ground after substitute Cristian Rodriguez had kicked out at him in frustration at the teenager’s earlier showboating.

Uruguay vs Portugal – Round of 16 Match Report

Edinson Cavani scored two outstanding goals as Uruguay claimed their place in the quarter-finals and sent European champions Portugal out of the tournament.

Uruguay took an early lead after brilliant combination play between Cavani and his strike partner Luis Suarez and the two forwards worked hard throughout to secure Uruguay’s victory.

Portugal began the second half with more purpose and Pepe’s equaliser was the first goal conceded by Uruguay in the tournament. It prompted Portugal’s best spell of the game but Uruguay regained their compact shape and Cavani added a brilliant second goal before limping off with a hamstring problem.

Uruguay defended their lead stoically and Portugal’s substitutes could not find a way through.

GOAL! Sensational one-two. Cavani swings a crossfield ball out to Suarez on the left who returns the favour with a whipped delivery to the back post for Cavani, to power in a header pic.twitter.com/zRb3TVNbOC

GOAL! Guerreiro takes a short corner and sends a delivery into the box. Pepe rises highest and is on hand to head in an expertly dispatched attacking header pic.twitter.com/zISCJHltm8

GOAL! Bentancur surges through the midfield lays off Cavani on the left who finesses a first time curling shot inside the post pic.twitter.com/RnpmMcJcfP

This was the first time Uruguay had won their opening four games at a World Cup since 1930, when their fourth win was in the Final.

At 35 years and 124 days, Pepe became Portugal’s oldest goalscorer in a major tournament.

Cristiano Ronaldo once again failed to score a goal in a World Cup knockout stage game. He did not have a single touch of the ball inside the area in the first half while his only shot on target in the entire game came in the second minute, when his low effort from distance was straight at Fernando Muslera.

After edging out lesser opponents in Egypt and Saudi Arabia in their opening two games, Uruguay turned on the style to beat hosts Russia and top their group. It was a more attacked-minded performance from Uruguay, who were helped by the first-half sending-off of Igor Smolnikov.

According to the official figures, Russia covered 98km, compared to 118km and 115km in their first two games

GOAL! Own goal! Denis Cheryshev diverts the ball into his own net as @Uruguay double their lead! pic.twitter.com/YdT6VS1mxV

GOAL! Edinson Cavani gets to the ball first to seal a win for @Uruguay! pic.twitter.com/JX1jRcgSTw

Uruguay coach Oscar Tabarez made changes to his starting line-up, brining in a more attack-minded left-back in Doego Laxalt as well as midfielder Lucas Torreira, with Martin Caceres moving to right-back. Laxalt scored Uruguay’s second goal and was fouled by Igor Smolnikov for the Russian’s second yellow card.

Uruguay joined Russia in the knockout stages after grinding out a result against Saudi Arabia, who restored some pride after being hammered in their opening game. Luis Suarez took the one opportunity that came his way but it was not the rout that many had predicted.

Saudi Arabia were much improved from the team that had surrendered five goals to Russia five days earlier. But while they were tidy in possession, they rarely came close to threatening the Uruguayan goal. 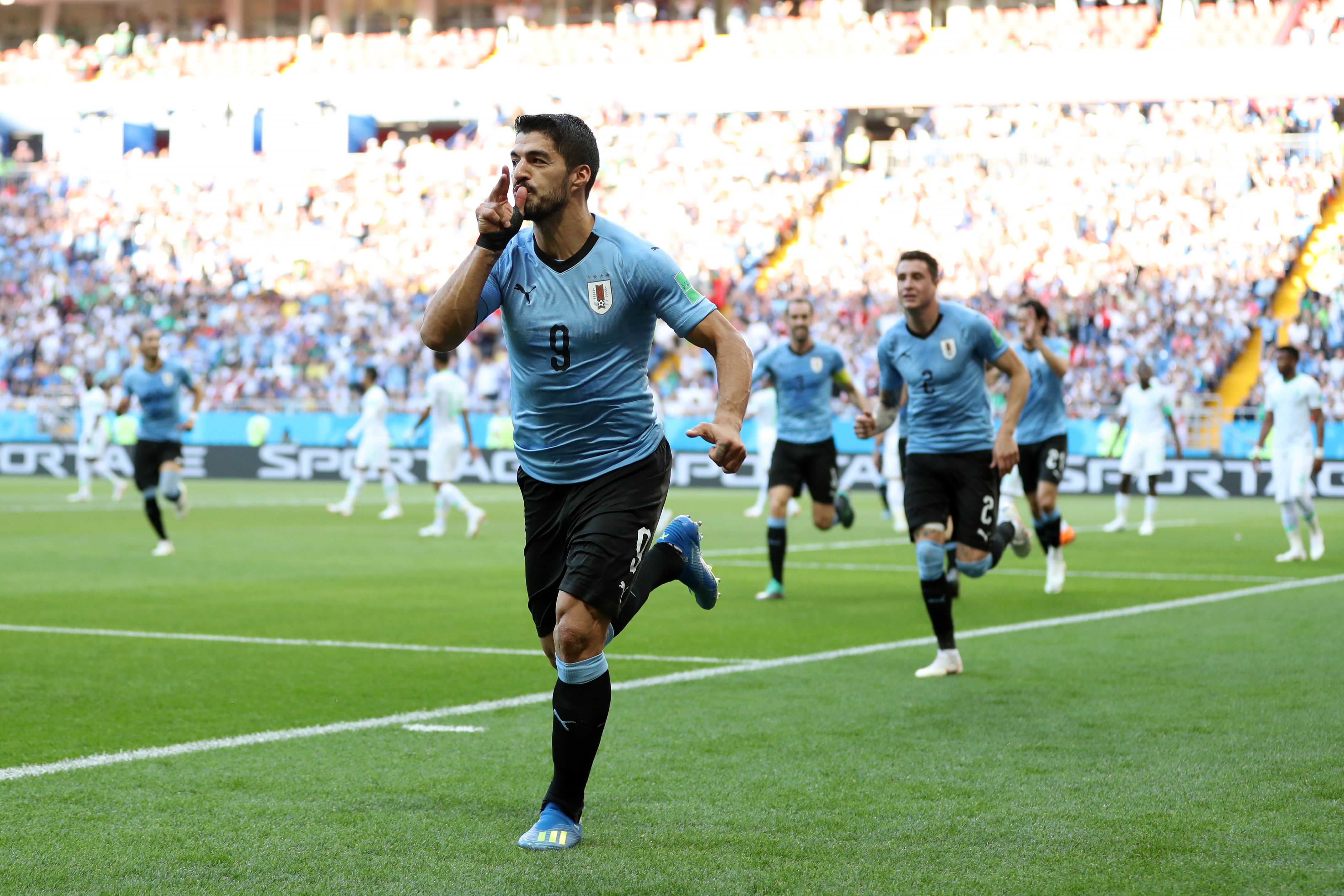 Saudi coach Juan Antonio Pizzi rang the changes after the opening-game hammering by Russia, making four changes to his starting line-up. Their general performance was much better but inexperienced keeper Mohammed Al-Owais, who came in for Abdullah Al-Mayouf, was at fault for Suarez’s goal.

Uruguay won their opening game at the World Cup for first time since 1970  despite being lacklustre in attack for most of the game. Luis Suarez looked below-par throughout, putting an excellent first-half chance from a corner into the side netting, while his strike partner Edinson Cavani saw two efforts saved, first by Egyptian keeper Mohamed El-Shenawy and then by a post. Instead it was a defender, Jose Gimenez, who made the late breakthrough for Uruguay, as Egypt, who had done enough to earn a point, took their eye off the ball. 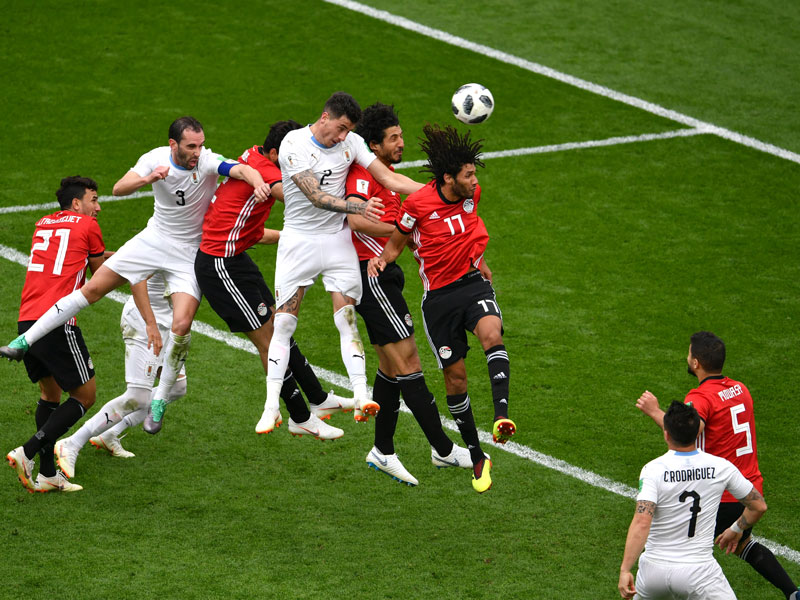 Mohammed Salah, injured in the Champions League Final for Liverpool against Real Madrid, failed to recover in time to play in Egypt’s opening game. His presence would have given the Egyptians a much greater threat in attack and forced Uruguay on to the back foot.

Uruguay started like a train and then came badly off the rails, with three defeats in the middle of a run of six games with just one win. But with a refreshed midfield they regained momentum and qualified for the 2018 World Cup in relative comfort.

Oct 2015
Despite the absence of Luis Suarez and Edinson Cavani, they kick off with convincing wins away to Bolivia and at home to Colombia providing a morale-boosting start and a tribute to
the depth of the squad.
Nov 2015
Still without Suarez, Uruguay are ruthless in their use of set-pieces and with quick, direct attacks they chalk up a comfortable 3-0 win at home to continental champions Chile.
Mar 2017
A 2-1 loss to Peru is their third defeat in a row – and on each occasion they had taken the lead. The sudden lack of defensive steel looks a real problem, and it got worse in June’s friendlies when they lose 3-1 to the Republic of Ireland and 3-0 to Italy.
Sep 2017
A few days after a goalless draw with Argentina, in which Uruguay hardly crossed the halfway line, a 2-1 win away to Paraguay effectively seals qualification.

Uruguay round out Group A alongside Russia, Egypt and Saudi Arabia.

Uruguay played a World Cup friendly against Uzbekistan which they won 3-0.

Uruguay will open their World Cup account against the Mohamed Salah led Egyptian team on the 15th June. On the 20th June they will then play Saudi Arabia, and finally the hosts Russia on the 25th of June.

Oscar Tabarez, age 70 (03.03.47)
Appointed for a second spell in charge in March 2006 and is approaching the end of what will surely be the last job of his career. Has put Uruguay back on the map, with his greatest achievement probably overseeing an enormously successful under-20 project. 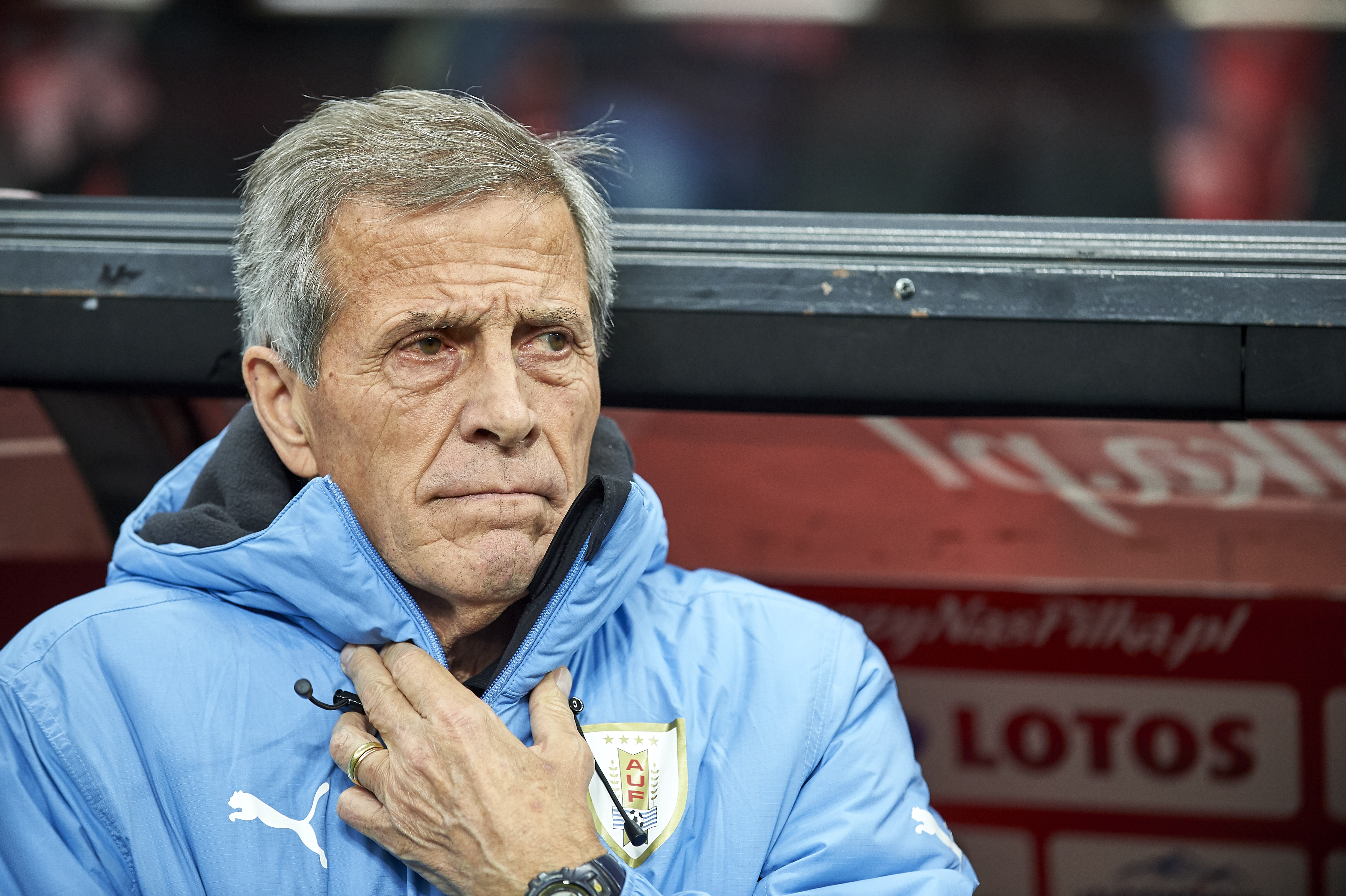 Boss: In probably his last coaching job, Tabarez will look to go out with a bang (Getty Images)

The Players
Star
Skilful, dynamic and often controversial, Luis Suarez is the team’s main attacking weapon and their biggest hope of glory. The country’s all-time top goalscorer is preparing for his third World Cup – and the last he will play close to his peak years.
Stalwarts
Edinson Cavani was South America’s top scorer in qualification, leading the attacking line when Suarez was missing or playing alongside him and dropping deeper. Team captain Diego Godin is the respected organiser of the defensive line who, although he may be losing a little pace, remains a vital figure and scores important goals.
Missing
Just 32 players were used in qualification and most of the old guard are still in and around the squad, with the exception of injury-hit Alvaro Pereira.
Debuts
All-round midfielder Federico Valverde was promoted from the under-20 side, bringing quality and controlled possession, and helping to change the characteristics of the side. Along with Rodrigo Bentancur, he represents the start of a generational change.

Who will supply Luis Suarez and Edinson Cavani?
Oscar Tabarez finally seems to have given up on Gaston Ramirez as a playmaker, so it could fall to current favourite Giorgian De Arrascaeta to open up opposing defences. 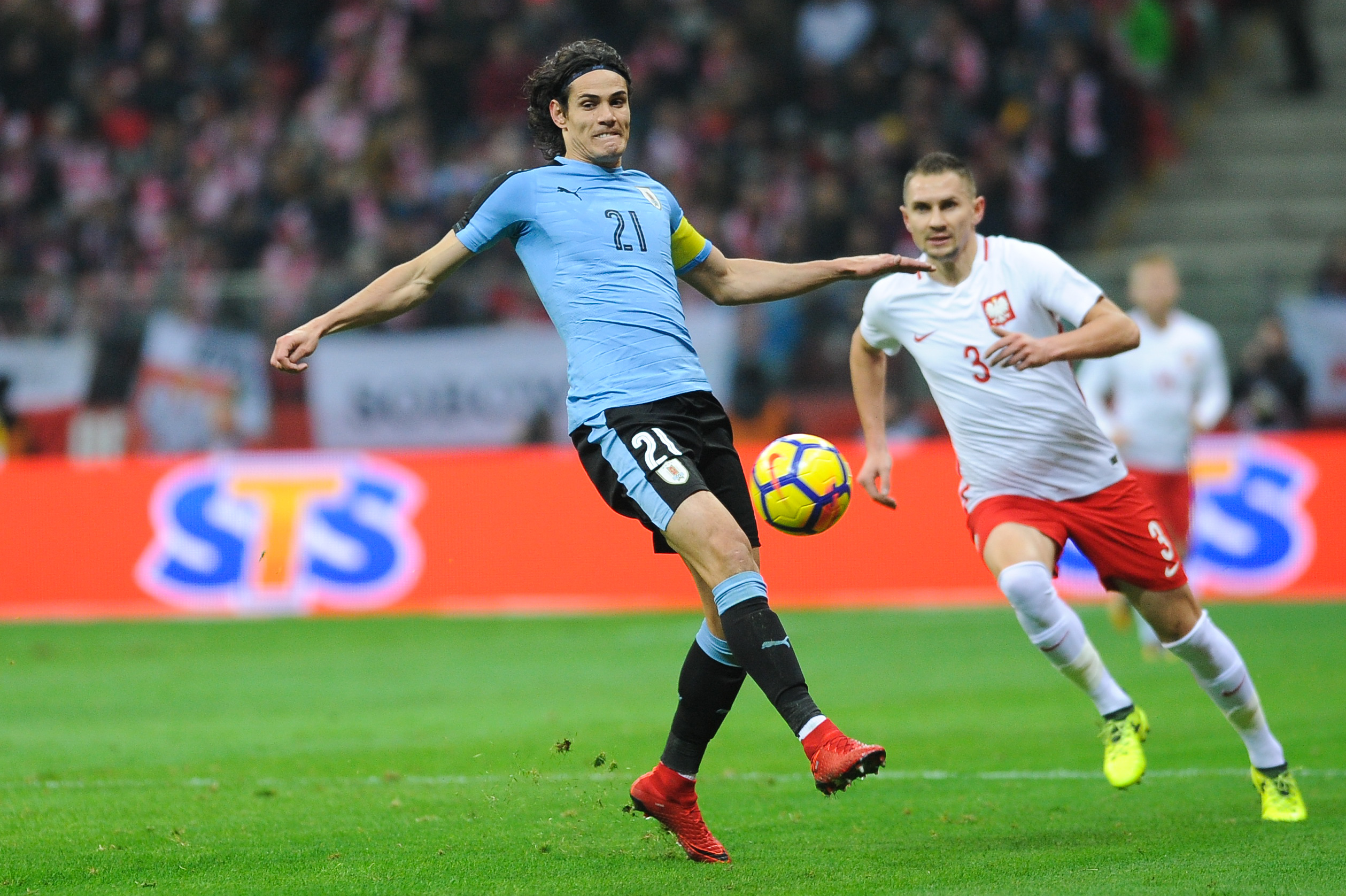 Help: Both Cavani and Suarez will need some help in Russia (Getty Images)

Does the defensive unit lack pace?
There is certainly a fear that if the team push up then the defence can be by-passed too easily. Since the 4-1 home defeat by Brazil in March, Tabarez has not chosen Sebastian Coates alongside Diego Godin and has dropped holding midfielder Egidio Arevalo Rios.

Can Suarez get through a World Cup without picking up a suspension?
In 2010 he missed the semi-final after being sent off for his notorious handball against Ghana. Four years later he rushed back from injury to help Uruguay into the knockout stage but was thrown out of the competition for biting.