The World Cup round of 16 starts with an absolute cracker of a match. Two football Goliath’s, France and Argentina face each other looking to book a place in the quarter-finals. There will be stars aplenty in Kazan on the 30th, but surprisingly, neither side has shown good form at the tournament so far.

France have looked very ordinary so far as they just did enough to top their group. They got lucky against Australia with a questionable VAR awarded penalty, and then Paul Pogba’s deflected shot somehow managed to find the net to give them a 2-1 win. They then narrowly held off Peru and played a dour 0-0 against Denmark. A lot was made of the big names Didier Deschamps left out of the squad, but what cannot be denied right now is that their big players, Pogba, Antoine Griezmann, and Kylian Mbappe, have all failed to play well.

Argentina have looked even worse though. Unimaginative against Iceland and totally outplayed against Croatia, they had to beat Nigeria to progress in their final group game. Lionel Messi scored a stunning goal but had it not been for Marcos Rojo’s late winner, Argentina would have been eliminated. Alas they were not, but changes have to be made by Jorge Sampaoli if they are to trouble France.

Chief among which, Angel Di Maria has to go. For too long he has been given opportunities and failed to perform. Cristian Pavon who has looked electric throughout the tournament, should start over him. Javier Mascherano, who for years anchored their midfield, looks tired and slow although there doesn’t appear to be many replacements right now so they may have to stick with him.

Unquestionably, the Argentine defence must improve because there is only so much Messi can do if they cannot stop France from scoring. We think they will and Messi and Argentina will progress.

Ronaldo and Messi both to score first – 16/1

He is their best defender and after a sublime season for Manchester City, he has to lead their defence against France. Prone to mistakes and hot headedness, he must eradicate both for his country even to stand a chance. 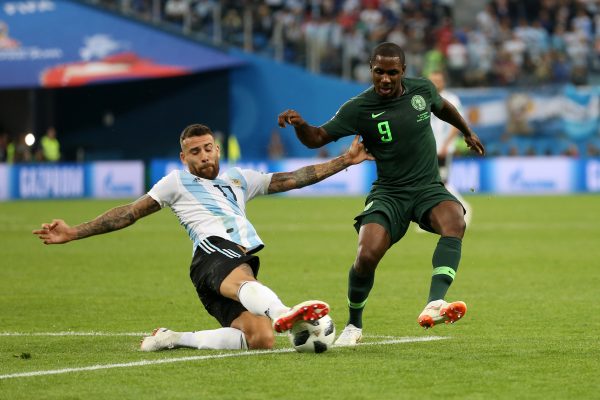 The second game of the day will have another Real Madrid and Barcelona feel to it. Messi faced Raphael Varane earlier, and now Luis Suarez goes up against Cristiano Ronaldo when Uruguay play Portugal at 19.00 in Sochi.

Uruguay have not set the world alight as they were expected to do with Suarez, Edinson Cavani and Rodrigo Bentancur, but like France, they have done just enough to top the group handily. Three matches, three victories. But more significantly, three clean sheets. The Uruguayan defence, led by Atletico Madrid pair Diego Godin and Jose Maria Gimenez, are yet to concede a goal at the tournament. Their offensive capabilities may be lacking right now, but their defensive strength will be tough to beat.

But they will be facing their toughest test yet when Cristiano Ronaldo comes to town. And more worryingly, an in-form Ronaldo at that. In Portugal’s first game, Ronaldo scored a hat-trick and a last minute free-kick to salvage a draw against Spain. He then scored the winner against Morocco with a header in the first five minutes.

They may have some defensive frailties, but we think Ronaldo will inspire Portugal to another unlikely victory here.

We may be getting ahead of ourselves with the title of this piece, but the thought of two of the greatest players ever to play the game, going head to head in a World Cup is too eye-watering to ignore. Apologies to France and Uruguay, but a Argentina vs Portugal matchup is what the world wants to see.

And if the past 10 years or so has taught us anything, it is to never bet against Lionel Messi and Cristiano Ronaldo.