Can Cristiano Ronaldo Guide Portugal To Another International Trophy?

Can Cristiano Ronaldo Guide Portugal To Another International Trophy?

Two years ago, Portugal managed to shock the football world by winning the 2016 European Championships. It was Ronaldo’s first trophy with the national side, however the manner of the victory did not satisfy many, and therefore Portugal have been overlooked as possible winners of the World Cup. Luis Mateus, TV pundit from Portugal said, “it was a dour run, with draws, extra time and penalties, benefiting from a favourable draw.”

Regardless, they secured the victory and now the question is whether Ronaldo can guide Portugal to do it again on the World Cup stage. First things first, they have to get passed Spain in their opening game of the tournament.

To some, this is the first big game of the 2018 World Cup. The Iberian peninsula nations of Portugal and Spain battle it out for what will probably be the match that decides the winner of Group B. This is important, because the winner will probably avoid Uruguay in the next round.

Portugal are a better team than two years ago, with more quality players that can support Ronaldo, such as Andre and Bernardo Silva. But once again, they are going to be heavily reliant on Ronaldo scoring goals, something he has not done in World Cups. On the other hand Ronaldo has been on brilliant form for Real Madrid this year so he is more than capable of winning the Golden Boot and carrying Portugal far.

Related: Who Will Be The Top Scorer At The World Cup?

Their opponents Spain are an unknown entity going into this game after sacking their coach Julen Lopetegui just before the tournament. Lopetegui had been guiding Spain on a run of 20 games unbeaten however he was sacked after taking the job for Real Madrid.

Whether this has a huge impact on the squad remains to be seen, but the majority of their players are older and of the world class variety so do no be surprised if the sacking has little effect on the team as a whole. Players like Sergio Ramos, Gerard Pique, Sergio Busquets, David Silva, and Andres Iniesta are all experienced enough to put this behind them and focus on the job at hand.

It would take a brave person to bet against Spain this World Cup considering their form.

In one of the matches of the tournament, Cristiano Ronaldo scored a hat-trick to salvage a 3-3 draw with Spain.

Cristiano Ronaldo to score from a direct free kick @ 17

If your team scores within the first 5 minutes then you get paid out as a winner!

Even after Lopetegui’s sacking, Isco is expected to play a central role in Spain’s World Cup. The creative brain of the side who will be given license to roam Isco showed just how dangerous he could be in Spains 6-1 demolition of Argentina during the friendlies. 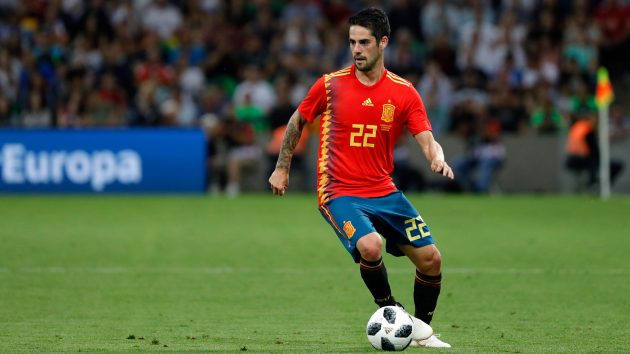 Isco is the man to watch for Spain today (Getty Images)

Nuno Gomes, ex-Portugal striker: “Even though we’ve got Spain as our first opponent, if Portugal don’t get through the group phase it will be a disaster.”

Diego Torres, El Pais: “This Spain team reminds me of the France side that won the World Cup in 1998, then had a disastrous tournament in 2002 and returned to reach the Final in 2006.”

There are two games before the one above. Egypt face Uruguay and Morocco face Iran in what should be a quality day of World Cup football.

In a pretty dreadful game, Uruguay secured the three points with a last minute header by Jose Maria Gimenez.

The middle match of the day is between Morocco and Iran. Many have said this is the game of the day not worth watching but it most definitely is. In Group B Morocco could be the dark horses to qualify for the next round largely due to their defensive solidity. Hakim Ziyech and Younes Belhanda will act as the creative forces going forward.

Iran on the other hand will struggle to get a point during the group stages due to their lack of quality and the opponents they have to play. That being said their best shot at points will come against Morocco later today and striker Sardar Azmoun is definitely one to watch.

A late own goal was the deciding factor here.