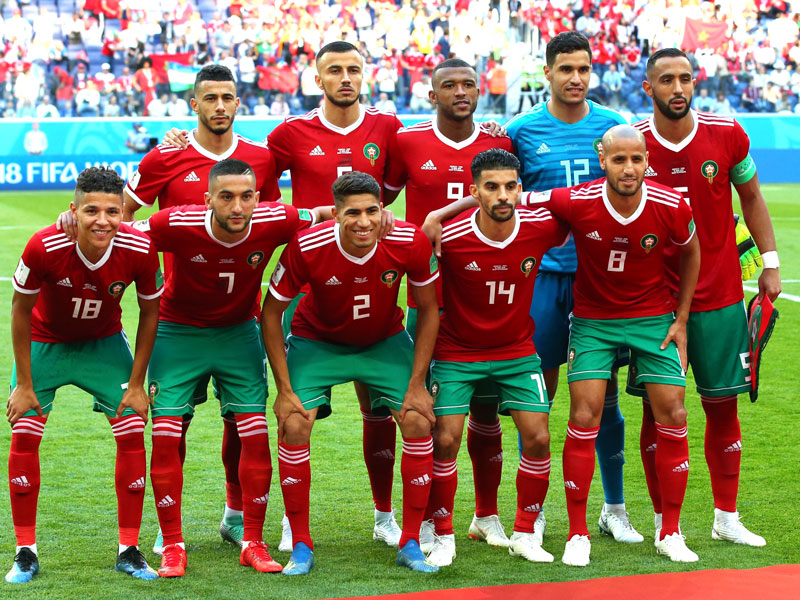 Morocco have been eliminated from the 2018 World Cup.

Spain topped the group on goals scored ahead of Portugal thanks to Iago Aspas’ dramatic late equaliser but were given a mighty fright by Morocco who exposed Spanish frailties and came within seconds of a memorable victory.

Confusion reigned in the final seconds after a VAR review confirmed Aspas’ goal after it was originally ruled offside.

Spain had recovered from an early setback to equalise through Isco. They enjoyed greater possession without ever controlling the game and Morocco deserved praise for their positive play, which saw Nordin Amrabat blast the woodwork in the second half before En Nesyri’s thunderous header gave them the lead for a second time. 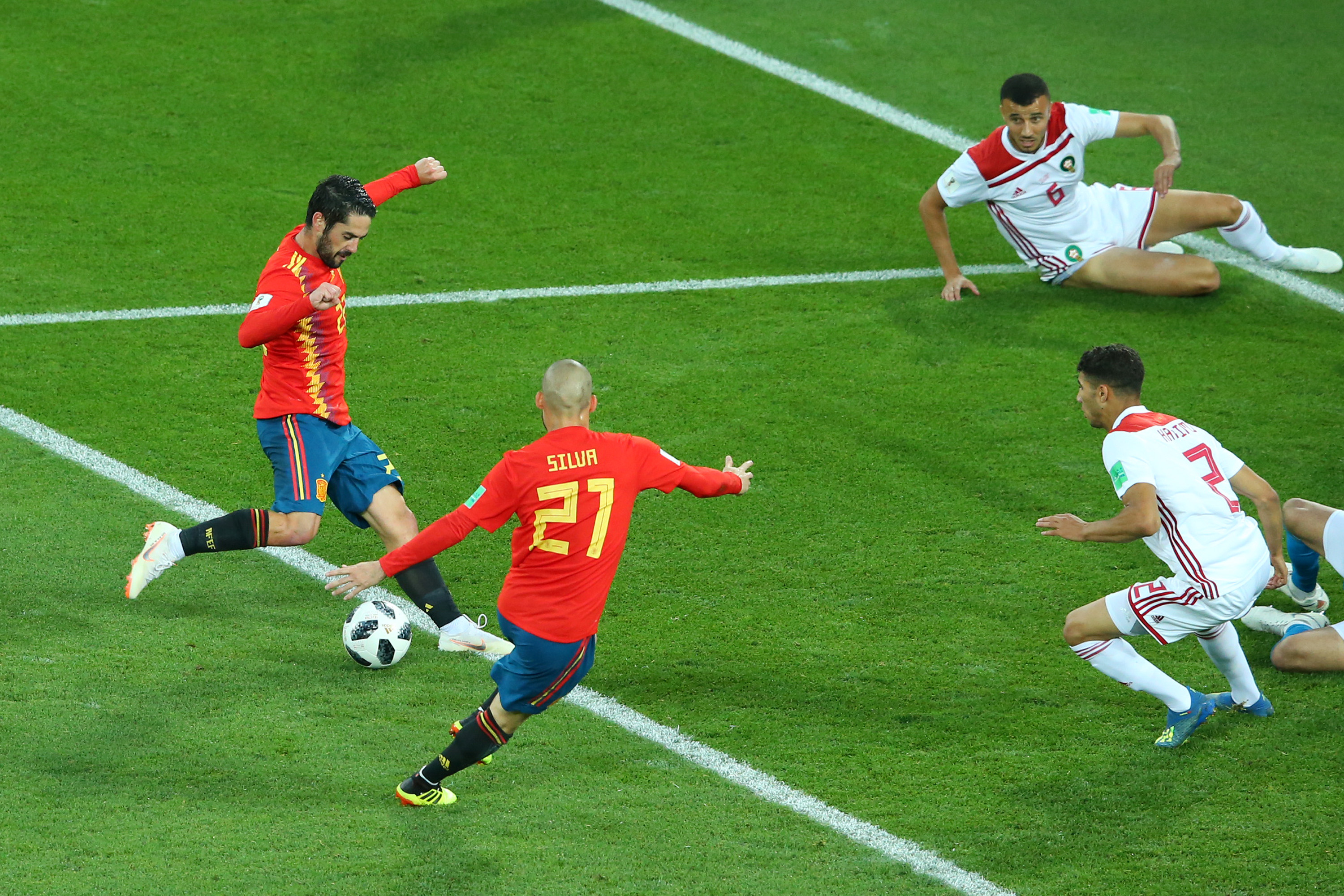 Morocco, frustrated that Gerard Pique’s two-footed tackle went unpunished, collected four yellow cards in a feisty first half. Their aggressive approach surprised Spain and they took an early lead when Khalid Boutaib seized on a miscontrolled ball from Andres Iniesta. Boutaib almost scored a second when Spain switched off from a throw-in.

Another game, another goal for Cristiano Ronaldo, whose record-breaking early header was enough for Portugal to see off an energetic Morocco side who could consider themselves desperately unlucky to be heading out at the group stage.

Rather from seeking to extend their advantage after taking the early lead, Portugal stepped back and allowed Morocco to dominate for much of the game. The Moroccans had a host of chances to turn their dominace into goals but were halted by a combination of brilliant saves by Rui Patricio and their own profligacy, particular from captain Mehdi Benatia.

Ronaldo had strong claims for a penalty late in the game when he was tripped by Nordin Amrabat, while Pepe again blotted his copyboook by collapsing to the ground after being tapped on the shoulder by Benatia.

Goalscorer Cristiano Ronaldo was named as the official man of the match, but any number of Morocco’s players – particularly Younes Belhanda and Hakim Ziyach – would have been more deserving of the award.

The middle game of the day, check out our match preview here.

Despite arguably being the better team, Morocco lose to Iran 1-0 after an own goal by Aziz Bouhaddouz.

Morocco have long been underachievers on the African footballing stage, given the depth of their squad and the talent they have at their disposal, but in recent years they have ramped up their ambition and they now return to the 2018 World Cup stage. They last played in the finals in France in 1998, but are back after hiring Herve Renard to guide their fortunes. A creative midfield is complimented by a strong defence but, although they won one of their qualifying games 6-0, striking is still a problem.

Nov 2016
Held to a goalless draw at home in Marrakech by group favourites Ivory Coast, Morocco have just two points from their opening two Group C games and are already trailing in the standings.
Jun 2017
Renard travels to meet Hakim Ziyech in Amsterdam and persuades the Ajax player to rejoin the fold after the midfielder said he would no longer play for Morocco following the coach’s decision to leave him out of the squad for the African Nations Cup.
Sep 2017
Six goals, including two from Ziyech on his return, against Mali give Morocco an injection of self-belief.
Sep 2017
A 0-0 draw with Mali takes them to five points. But Ivory Coast, who could have gone five points clear, lose at home to a weak Gabon side, who are without Pierre-Emerick Aubameyang.
Nov 2017
Needing only a draw away to Ivory Coast, two goals in as many minutes midway through the first half seal victory.

Morocco will do well to get out a tough group with Portugal, Spain and Iran making up the rest of the group.

On the 23rd of March Morocco will played against Serbia and won 2-1. They then followed that up with a win against Uzbekistan four days later. A draw against Ukraine and another win against Slovakia came at the end of May and start of June. Finally, they beat Estonia on the 9th.

Morocco will play against Iran first in the opening game of Group B on the 15th of June. Portugal and then Spain will follow on the 20th and 25th of June. 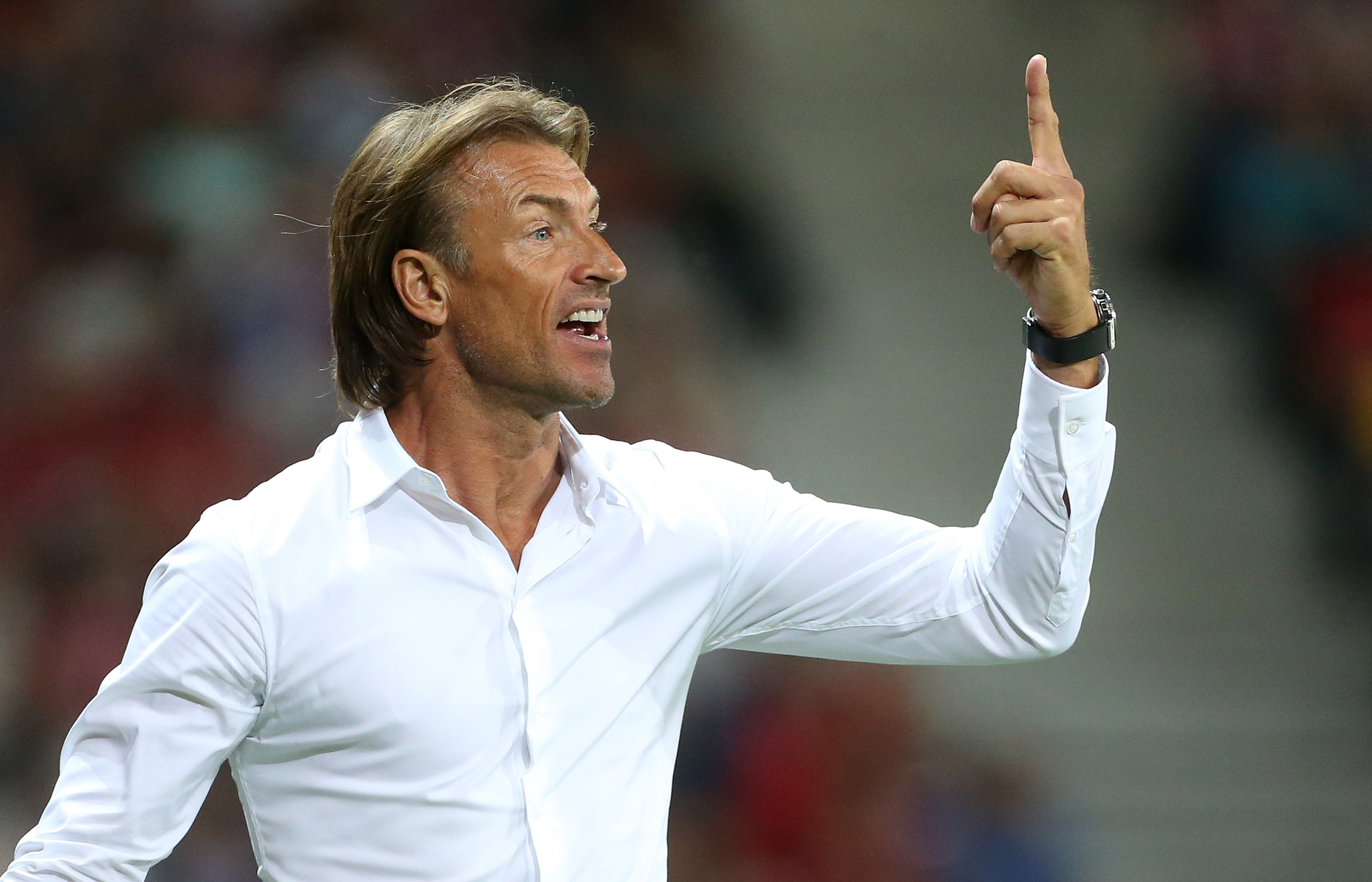 Revival: Behind Herve Renard, Morocco has gone through a revival (Getty Images)

The Players
Stars
Juventus defender Mehdi Benatia enjoys the highest profile of the Moroccan exports, while the midfield duo of Mbark Boussoufa and Younes Belhanda have a star quality that energises the team.
Stalwarts
Dutch-born Karim El Ahmadi is the anchor of the side and Hakim Ziyech on the right is a creative force.
Missing
Injury saw defender Manuel Da Costa miss much of the qualifying and he could lose his place in the squad. Striker Youssef El Arabi also looks to have been cast aside.
Debuts
Feyenoord’s Sofyan Amrabat has chosen to play for Morocco over Holland, just as Ziyech did two years earlier. 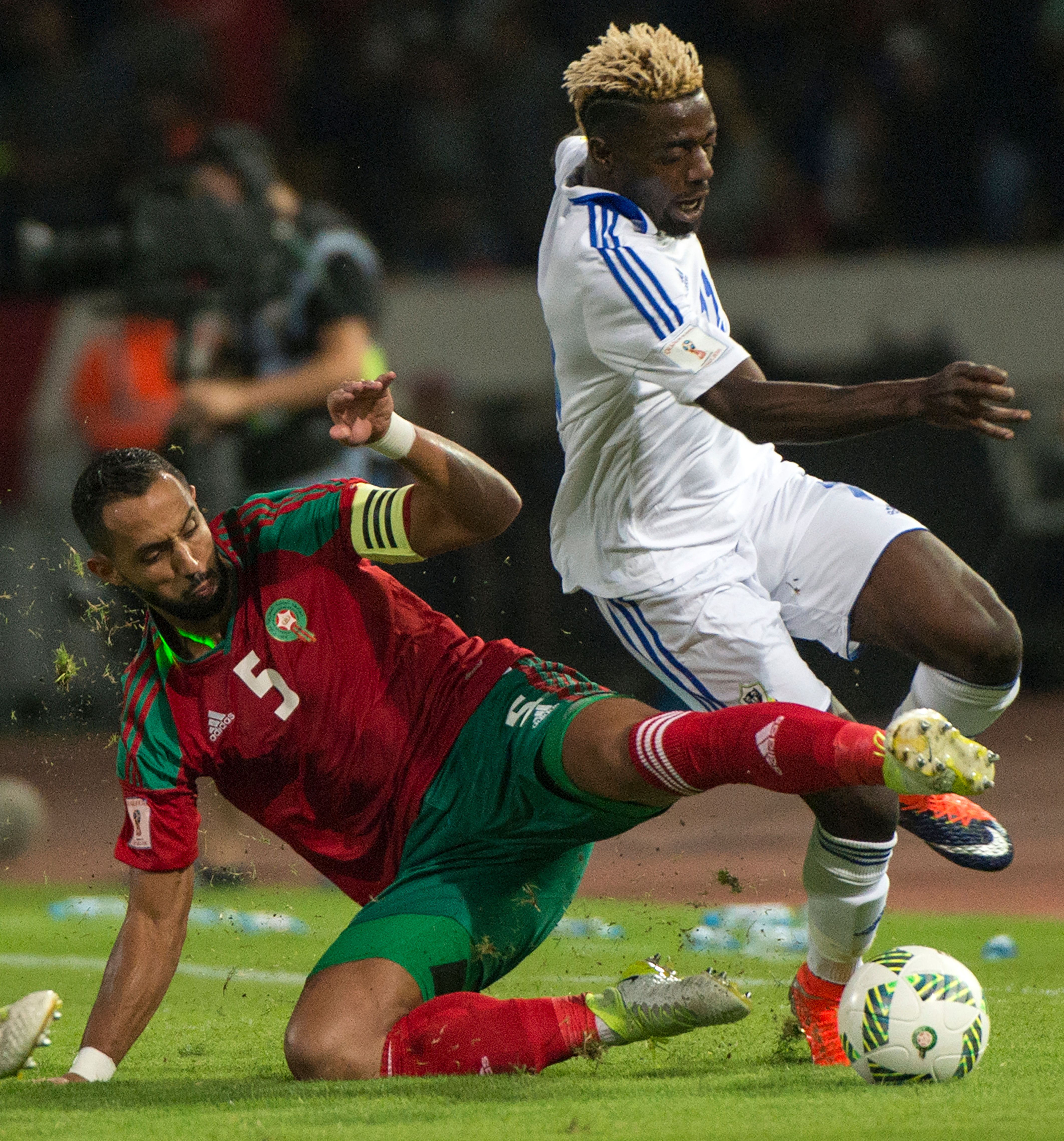 High Profile: Mehdi Benatia has the highest profile of the Moroccan players. He will anchor their defence (Getty Images)

Will Morocco manage to retain their new-found unity?
There are many disparate elements to a squad that has a French-born contingent, a Dutch-born colony and a few born in Morocco itself. It has not always been harmonious but a return to the World Cup has been built on team spirit.

Is Karim El Ahmadi past his sell by date at international level?
The former Aston Villa midfielder, who is now 32, played a major role in the World Cup qualifying campaign and was also integral to Feyenoord winning the Dutch title last season. However, his legs look to be growing a little weary and he could struggle this summer. 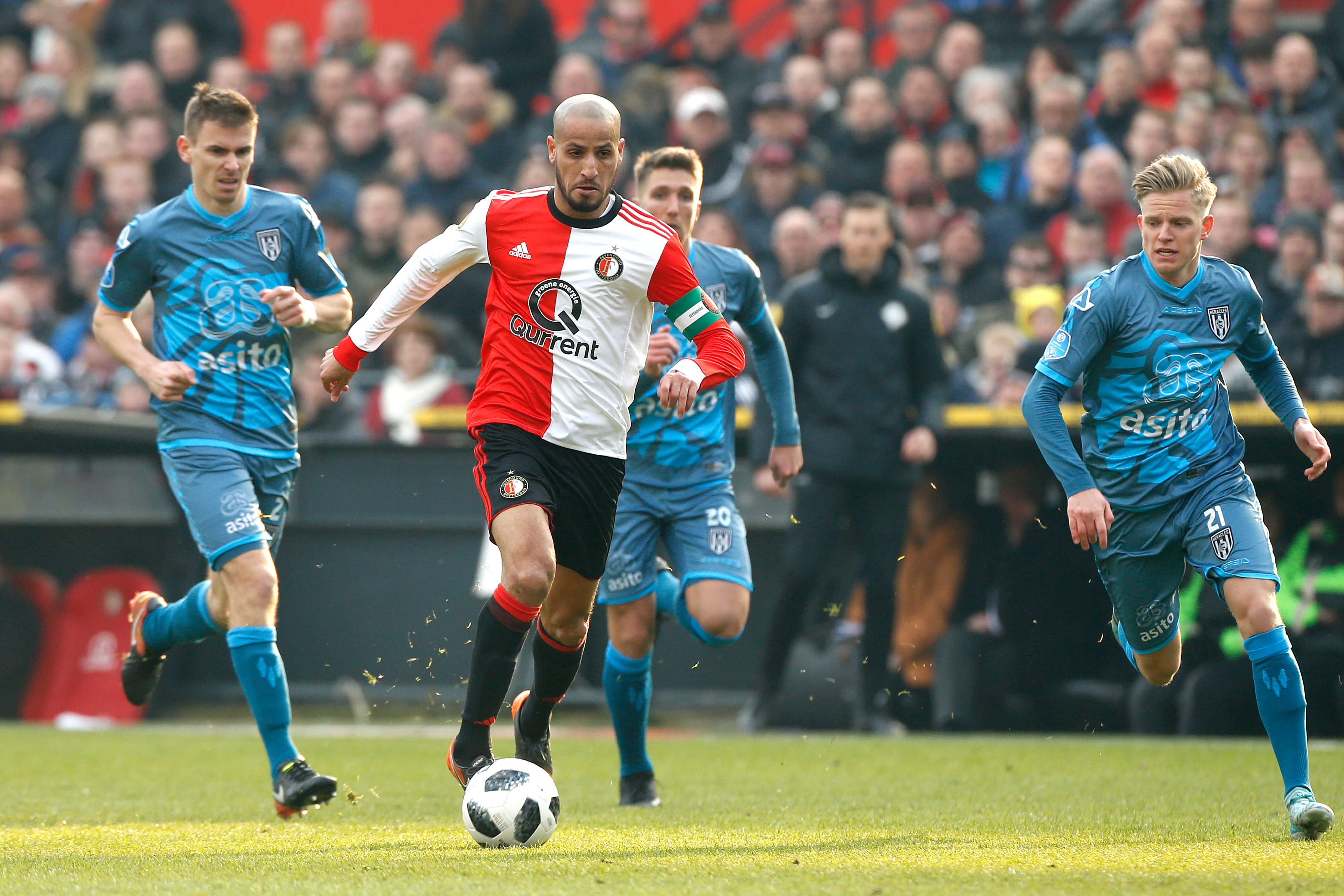 Weary: At 32, is Karim El Ahmadi past his prime? (Getty Images)

Could Herve Renard’s side be a little light in attack?
At the African Nations Cup in January, the gangly Aziz Bouhaddouz – who plays for St Pauli in the German second division – was the team’s target man. He has since lost his starting place – and ever since then Morocco have little physical presence in attack.

Will Renard make more changes to keep the regulars on their toes?
Probably! He is a man who likes to have an edgy camp, keeping players on their toes, and he will most likely spring a surprise with some new selections when the team play their next friendlies in March. For example Sofiane Boufal has missed out on the squad.