Welcome to our player profile on Thiago Alcantara, the Spaniard playing at German giants Bayern Munich. Take a look at his Talent Scout from November 2011.

Spain’s resounding 6-0 victoryat home to Liechtenstein in September may have secured their place at next summer’s European Championship in Poland and Ukraine, but that was not what most excited the Spanish fans.

Qualification was, of course, good news, but it was always expected. Better news came with the introduction of second-half substitute Thiago Alcantara

Although he had made his debut in a friendly against Italy less than a month earlier – after which Mario Balotelli described him as the “greatest” of all Spain’s players – a first competitive game for the midfielder born in Italy to Brazilian parents ended all arguments over where his international future lay.

Vicente Del Bosque’s decision to fast track the youngster into the seniors felt like a political move to ward off his other suitors, but no one questioned the reasoning behind such a ploy. During the summer, Thiago had scored a wonderful goal in the Final as Spain won the Euro Under-21 Championship and Del Bosque’s plan to secure his future was considered the correct one.

But there is now a feeling Thiago Alcantara may end up playing an important role on the national stage earlier than anyone had expected. He is certainly doing so at Barcelona, where coach Pep Guardiola sought to bring him through slowly last season. 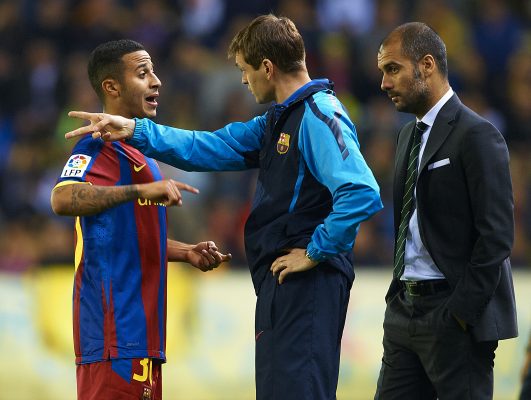 Progression: Guardiola was careful how to use Thiago early on in his career (Getty Images)

Combining his first-team duties with games for Barcelona B, he made just six starts last term, and when Cesc Fabregas arrived during the summer some wondered if that might arrest Thiago’s development.

Guardiola, however, is very conscious of the need to allow for a logical progression within the Barca midfield, completing cycles without having to rush players through. Xavi is aged 31, while Andres Iniesta is 27. The addition of 24-year-old Fabregas and Thiago completes the pattern, and they have played assiduously so far – and they have done so together.

Fabregas scored in each of Barcelona’s first five games while Thiago, who renewed his contract in the summer, began the season as a starter against Real Madrid at the Santiago Bernabeu and was in the side for five of the first six league games, also playing once in the Champions League. He has played well, too, scoring once and providing two assists in La Liga, with another assist in the Champions League.

Although Guardiola has one or two minor concerns about Thiago’s ability to retain possession, there is no doubt about his talent. He even has other players – who are not normally given to raving about opponents – talking about him, with Villarreal’s Borja Valero describing the Barca boy as “my weakness – what a player!”

Luis Milla, Spain’s Under-21 coach, calls him “technically gifted”, Santiago Segurola, the country’s most respected football writer, defined him as a “virtuoso” and the newspaper El Pais likened him to a circus performer. 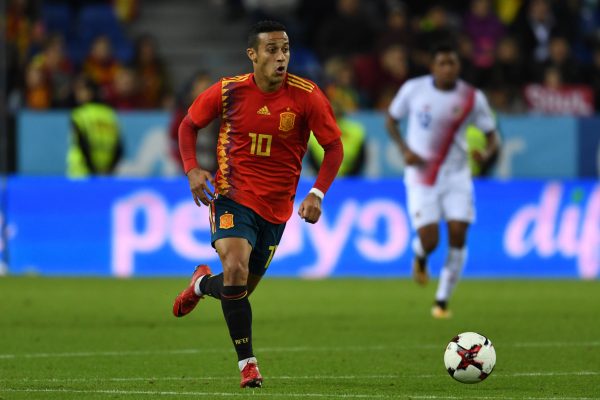 The son of 1994 Brazil World Cup-winner Mazinho and a former professional volleyball player, there is something special about Thiago. His movement is unusual, his touch impeccable: soft and swift yet effortless.

There is also a glimpse of fantasy about his play. Not since Michael Laudrup has anyone seen a player so often “pass with the eyes”, looking one way and playing the other. And not since Deco have Barcelona fans seen someone use the sole of his boot so often. Thiago is like a futsal player, controlling the ball with his studs and then rolling it across the turf. He stands out immediately.

At times it can look as if he is teasing other players. But the more you watch him, the more you realise there is a reason for it. This is simply the way he plays. And if it looks aesthetic, it is effective too.

He may have been pushed through quickly, but that is because Thiago is a special footballer. And now he is a Spanish footballer, too.