Spain have been eliminated from the 2018 World Cup.

Goalkeeper Igor Akinfeev was Russia’s shoot-out hero after saving two penalties to knock out Spain and send the hosts through to the quarter-finals.

It was the biggest shock of the tournament, not least because Russia had started nervously and allowed Spain to take an early lead. But Spain then sat back, their passing lacked penetration and they handed Russia a lifeline when Gerard Pique handled at a corner shortly before half-time.

Russia had a gameplan to defend deeply against Spanish possession and the 2010 champions, who surprisingly started without Andres Iniesta, could not find a way to unlock the massed Russian defence.

Spain’s attacking substitutes, including Iniesta, gave them more edge in extra time but Russia held out for the shootout in front of the home crowd.

Both teams took advantage of new rules to become the first countries to make four substitutions in a World Cup match.

Spain had strong grounds for a penalty in extra time when Pique and Ramos were held at a corner, but their claims were rejected following a VAR consultation,

Spain topped the group on goals scored ahead of Portugal thanks to Iago Aspas’ dramatic late equaliser but were given a mighty fright by Morocco who exposed Spanish frailties and came within seconds of a memorable victory.

Confusion reigned in the final seconds after a VAR review confirmed Aspas’ goal after it was originally ruled offside.

Spain had recovered from an early setback to equalise through Isco. They enjoyed greater possession without ever controlling the game and Morocco deserved praise for their positive play, which saw Nordin Amrabat blast the woodwork in the second half before En Nesyri’s thunderous header gave them the lead for a second time. 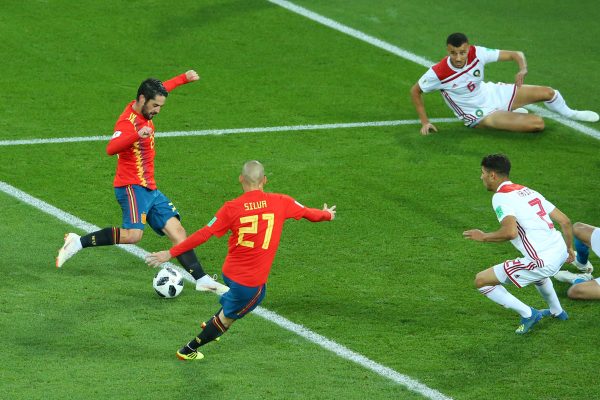 Morocco, frustrated that Gerard Pique’s two-footed tackle went unpunished, collected four yellow cards in a feisty first half. Their aggressive approach surprised Spain and they took an early lead when Khalid Boutaib seized on a miscontrolled ball from Andres Iniesta. Boutaib almost scored a second when Spain switched off from a throw-in.

Spain in their first game will have to try and stop Cristiano Ronaldo. – Read our match preview here.

One of the most exhilarating games ever seen at a group stage of the World Cup. Spain appeared to be heading for victory after twice recovering to cancel out goals from Cristiano Ronaldo. A third goal, from Nacho’s spectacular volley, was a just reward for Spain’s intricate and intense passing. But Ronaldo had the last word when he completed his hat-trick with a superb free-kick with two minutes of normal time remaining.

Cristiano Ronaldo joined the small list of players who have scored in four World Cups.

Cristiano Ronaldo scored the 51st hat-rick of his career. It was also the 51st hat-trick scored as a World Cup.

This was the first game in charge for Spain’s interim coach Fernando Hierro following the sacking of Real Madrid-bound Julen Lopetegui. But their opening two goals – the first set up by a long ball, the second via a set-piece – were not typically Spanish.

“I wouldn’t want to face Spain at the 2018 World Cup,” said Lionel Messi. And by the end of their qualifying campaign, others must have felt the same way. Spain finished top of their group, and ultimately did so with an authority and assuredness that was unexpected after the way they exited the 2014 World Cup and the 2016 Euros.
Their progress was virtually secured when they outclassed Italy at the Santiago Bernabeu, going on to collect 28 points and score 36 goals, while conceding just three.

Sep 2016
Hammering Liechtenstein 8-0 may not sound much, but Julen Lopetegui’s first game reveals a coach who is thoughtful about tactical shifts and is willing to change things.
Sep 2017
Led by Isco, Spain are superb as they beat Italy 3-0 to effectively decide the group.
Oct 2017
The Catalan independence referendum, which is declared illegal by the Spanish government, brings conflict to the surface and Gerard Pique is abused when training at Spain’s Las Rozas HQ. Later in the month qualification is confirmed with a 1-0 win in Israel.

Spain will battle it out with Portugal for top spot in Group B, with Morocco and Iran filling out the other two positions.

Spain started their 2018 international warm up matches for the World Cup against Mats Hummels and Germany on the 23rd of March, of which they drew 1-1. Then, guided by Isco, the Spanish hammered Argentina 6-1. A draw against Switzerland followed and finally they beat Tunisia on the 9th of June.

Their toughest game is their first one, Portugal on the 15th of June. Spain should then go on to gain victories against Iran and Morocco on the 20th and 25th.

The head coach role had been filled by Julen Lopetegui but it was announced on  the 13th of June, two days before their World Cup was due to start, that he had been sacked after taking the Real Madrid job. Real Madrid legend Fernando Hierro will take over but time will tell if it does throw Spain’s World Cup into disarray. What makes this even more shocking is that Lopetegui had guided the team on a 20-game unbeaten run. 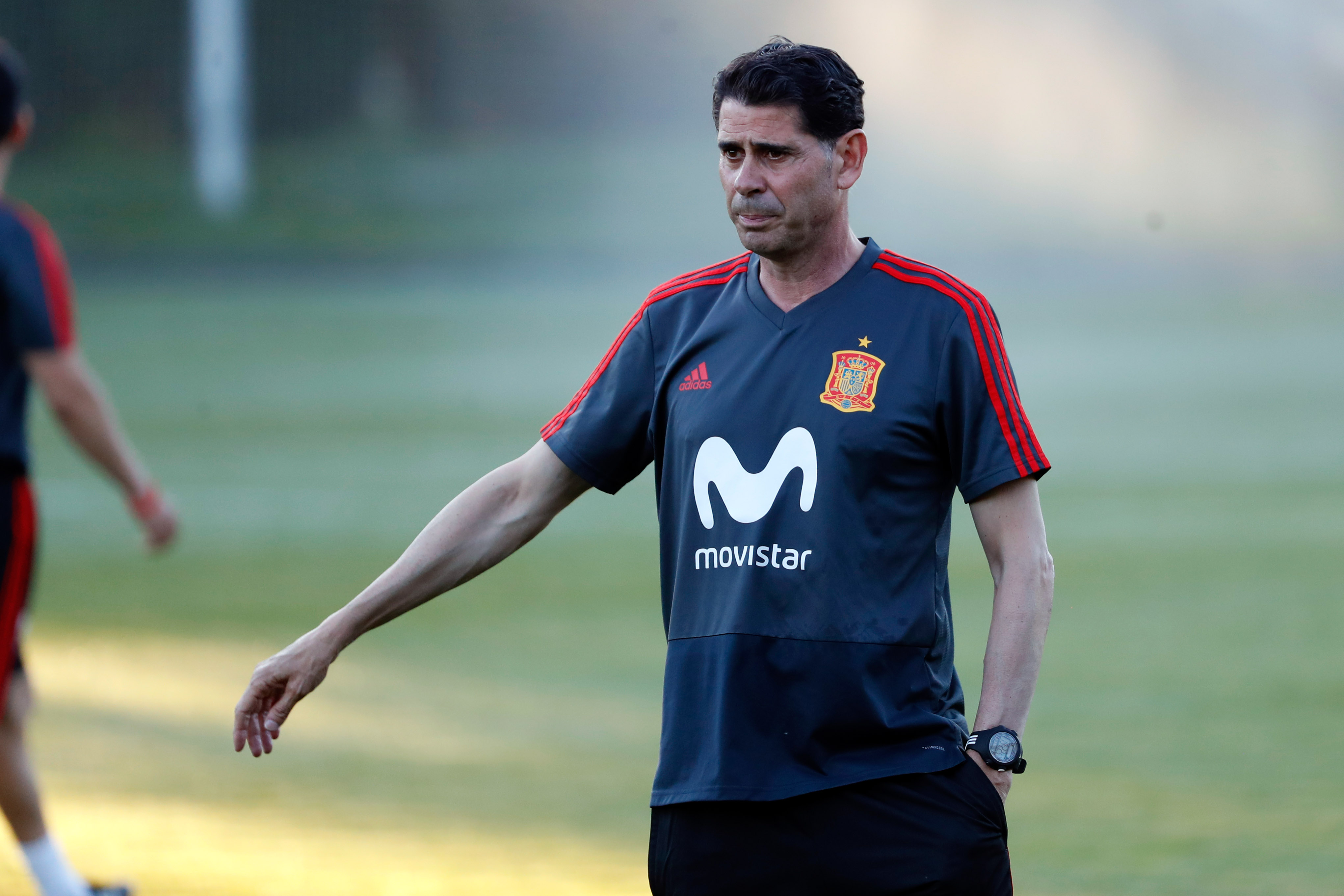 Hierro takes over from Lopetegui as Spain coach (Getty Images)

The Players
Stars
Watching Isco take Giorgio Chiellini and Italy apart, and then glide around the Rosaleda in Spain’s penultimate game of 2017, it seems incredible to think that he didn’t make the final squad in 2014 and 2016. Outstanding this year, he will be the creative heart of the side in 2018.
Stalwart
David Silva has always been there, even if he perhaps didn’t get the recognition he deserved alongside illustrious team-mates like Iniesta and Xavi. He is the top scorer under Lopetegui, with 11 goals. And Jordi Alba is still around as well, flying up and down the wing, head back and legs whirring.
Missing
Diego Costa’s move from Chelsea to Atletico Madrid has been delayed by the club’s ban on incoming transfers. The deal will finally go through in January, but having played no club football for the past six months he is in a race to get match fit.

Sergio Busquets has recently suffered a toe injury, but should be back for the World Cup. 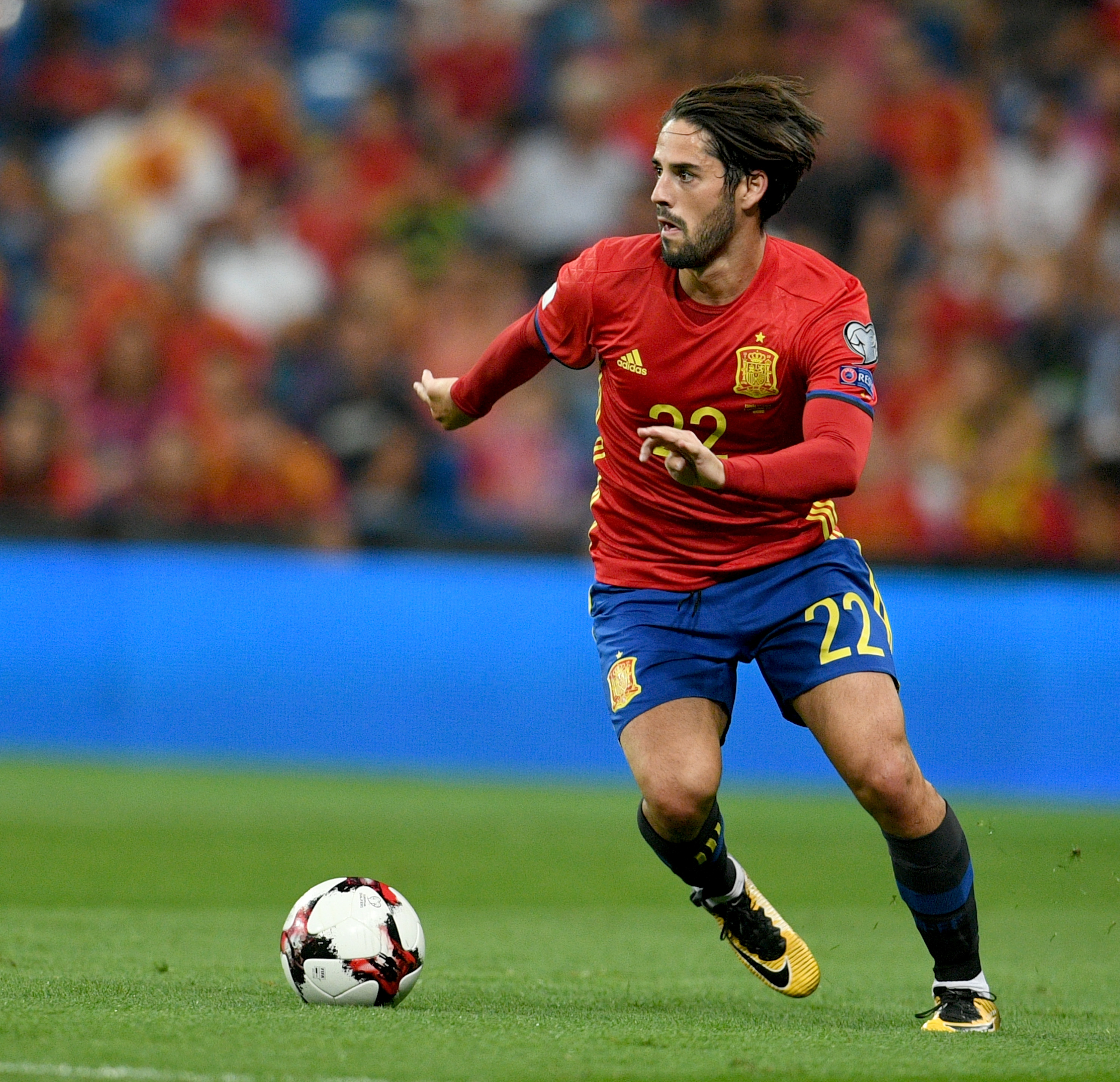 Isco: He is arguably the biggest star in the Spanish team (Getty Images)

Can they keep up the current form?
After a recent friendly, Costa Rica’s coach said of Spain: “They move the ball with one touch and at devilish speed.” That will be the key to their game next summer – if they can maintain that speed of circulation at the end of a long season.

Who plays up front?
Considering the squad selection Diego Costa is probably going to start. And then there’s Rodrigo, who is scoring goals for Valencia and Spain. Against Italy, they played without a fixed striker – something that even Alvaro Morata, the “victim” of the tactic, said was a good idea. Shockingly, Morata has failed to make the squad at all. 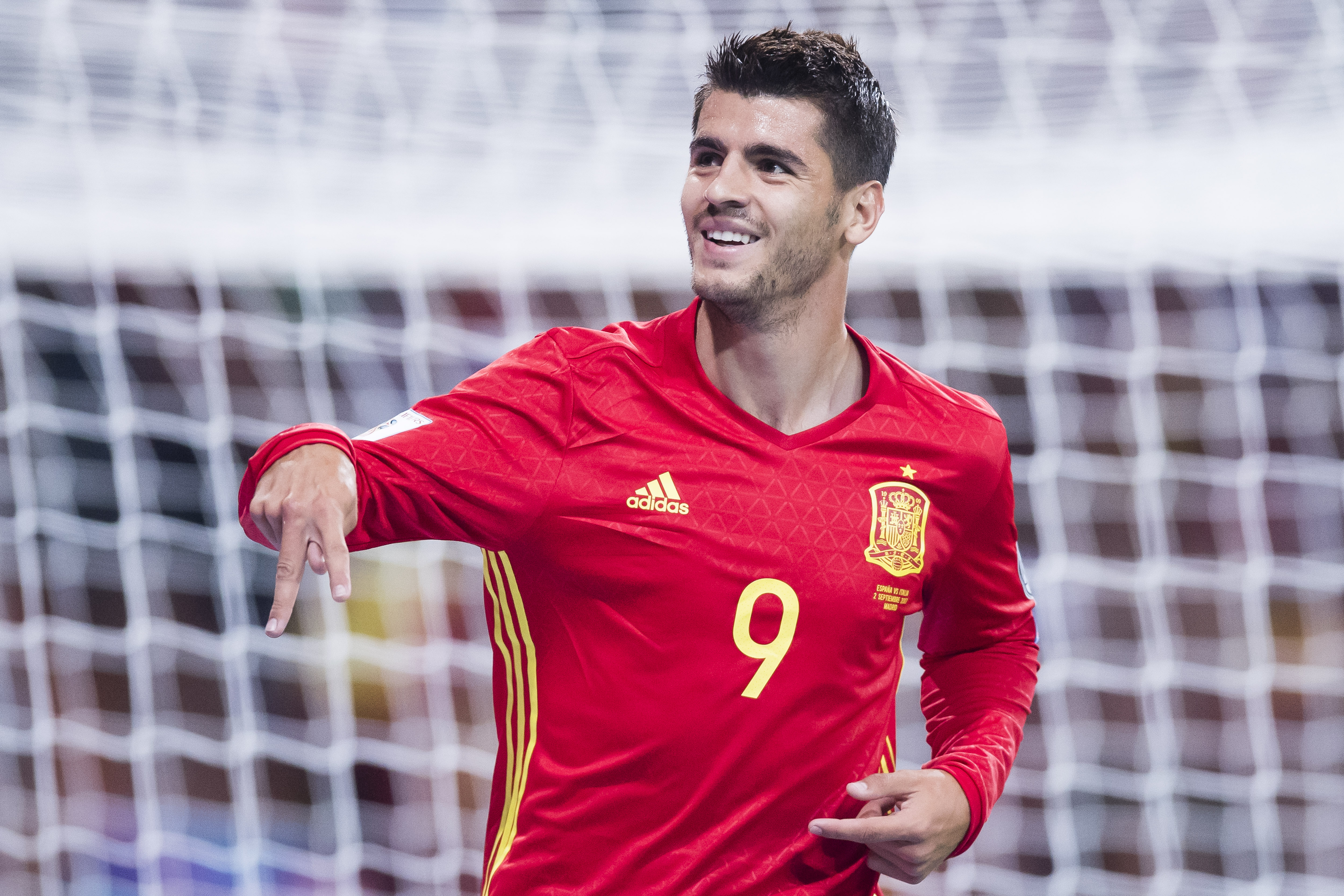 One “pivot” or two?
Usually, Sergio Busquets has played alongside another midfielder – usually Koke, sometimes Saul, occasionally Thiago – but at times he plays alone with two “interiors” ahead of him to either side.