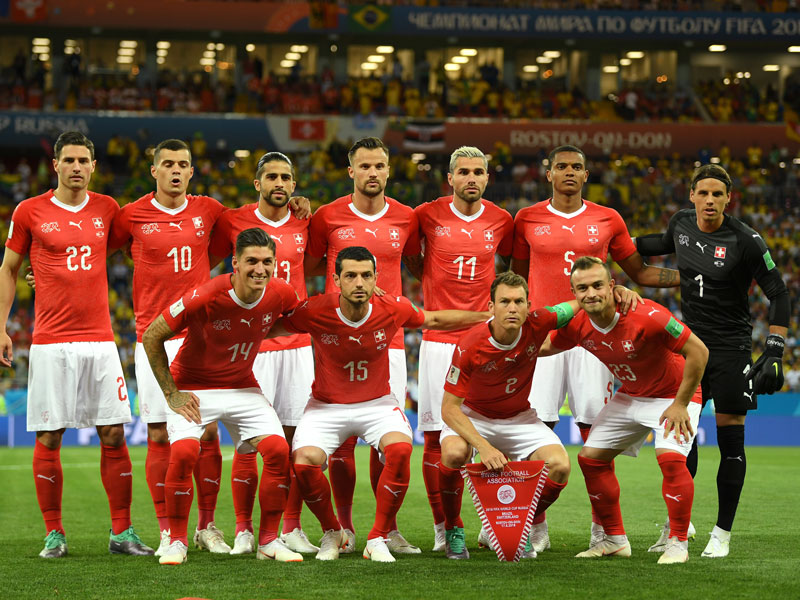 Switzerland have been eliminated from the 2018 World Cup.

Switzerland vs Sweden – Round of 16 (July 3rd) Match Report 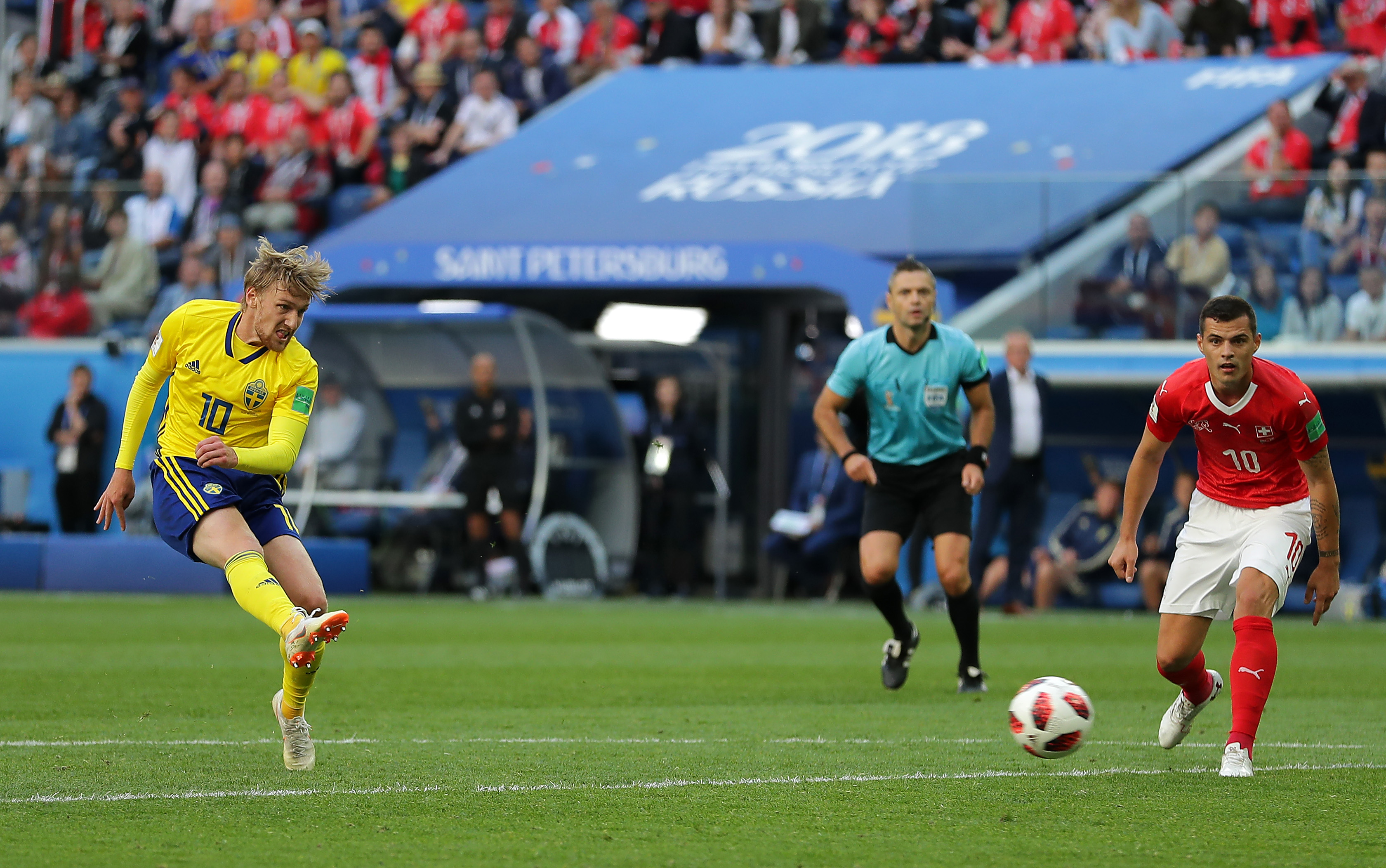 Switzerland crept into the last 16 despite being held to a draw by already-eliminated Costa Rica, who secured their first only and only point thanks to a stoppage-time penalty.

Costa Rica were the better team for large chunks of the game and should have taken the lead in the first half but Yann Sommer made an excellent save to deny Daniel Colindres.

The Swiss were below their best and conceded an equaliser from a corner only for substitute Josip Drmic, who had earlier struck the crossbar, to put them ahead with minutes remaining. They looked to have clung on for a victory when a VAR review ruled against a Costa Rica penalty, but the Central Americans were awarded a spot-kick in stoppage time. Captain Bryan Ruiz equalised via the back of keeper Sommer.

GOAL! Dzemaili slots it past Navas after Embolo nods the ball down from a Lichtsteiner cross, straight into the path of the onrushing midfielder pic.twitter.com/JExNBtnm6W

GOAL!!! Kendall Watson rises highest in the box and hammers home a header to equalise with Costa Rica's first goal of the World Cup! pic.twitter.com/moa2NhDVVp

GOAL! Costa Rica draw level in the closing stages through a penalty but it's a Yann Sommer own goal, with the ball finding its way in via the unfortunate keeper's back pic.twitter.com/qnfy23HCU4

Costa Rica’s goals ensured that all 32 teams scored in the group stage.

Yann Sommer was credited with an own goal for Costa Rica’s second equaliser but he had kept Switzerland in the game with some excellent saves in the first half.

Xherden Shaqiri inspired Switzerland to a dramatic recovery and victory in an enthralling all-European encounter. Serbia took an early lead through Aleksandar Mitrovic and were the better, more balanced side in the first half. But the Swiss played their way back into the game when Granit Xhaka equalised with an unstoppable shot early in the second half. Serbia were aggrieved that VAR was not used when Mitrovic was wrestled back by two Swiss defenders but they continued to press for a winner. A midfielder, Luka Milivojevic, was replaced an attacker, Nemanja Radonjic, but Serbia were caught on the break by the outstanding Shaqiri.

Grant Xhaka made the sign of an Albanian eagle as he celebrated his goal – a reference to Serbia’s role in the Yugoslav civil war, when his Kosovan father was imprisoned by the Serbs.

Brazil were frustrated and held to a draw by Switzerland in their opening game after Steven Zuber’s controversial header cancelled out Philippe Coutinho’s spectacular goal.

The pre-tournament favourites took a deserved lead but their play dropped off after scoring the opener and they could not raise their game when Switzerland equalised with Steven Zuber’s header early in the second half.

Neymar, who was heavily fouled throughout, was one of a number of Brazilians who had late chances to grab the winner, but Switzerland, who had no shots on goal after their equaliser, held out.

GOAL! Zuber powers home his header for Switzerland to level the scores against Brazil!#WorldCup pic.twitter.com/huAf6y9rIt

Granit Xhaka and Haris Seferovic were part of the Swiss side that beat a Brazil team containing Alisson, Neymar, Coutinho, Casemiro at the 2009 Under-17 World Cup.

The Brazilian federation launched a formal complaint to FIFA about the refereeing, claiming that Switzerland’s equaliser should have been ruled out after a push by Zuber on Miranda just before he jumped to head the ball home, but VAR ruled that the goal stood.

Switzerland won their first nine qualifiers but were still edged into second place on goal difference by Portugal after they lost 2-0 in Lisbon. They then squeezed through the play-offs, winning 1-0 on aggregate against Northern Ireland to qualify for the 2018 World Cup. This should be a team at its peak, with a number of key players – such as Ricardo Rodriguez, Fabian Schar, Xherdan Shaqiri, Granit Xhaka and Haris Seferovic – all now in their mid-twenties.

Sep 2016
Fresh from winning the Euro 2016 title, and without the injured Cristiano Ronaldo, Portugal are caught off guard in Basle as Switzerland beat them 2-0 in the opening match of the campaign.
Oct 2017
Both teams win their next eight games, setting up a showdown in Lisbon. Portugal win comfortably to top the group and send the Swiss into the play-offs.
Nov 2017
A controversial penalty, awarded for handball by Corry Evans and scored by Rodriguez, gives Switzerland a 1-0 victory in the first leg of their play-off against Northern Ireland. Switzerland coach Vladimir Petkovic says the decision was harsh but that his team deserved to win in any case.
Nov 2017
Rodriguez again foils Northern Ireland with a clearance off his line in stoppage time in a 0-0 draw that sends Switzerland to Russia.

Switzerland are in Group E alongside Brazil, Costa Rica and Serbia.

Switzerland beat Greece on the 23rd of March, and then smashed Panama 6-0 four days later. They then salvaged a draw against Spain and finally they beat Japan 2-0.

They open their account against Brazil on the 17th June, Serbia follow on the 22nd and finally Costa Rica on the 27th.

Vladimir Petkovic, age 54 (15.08.63)
Replaced Ottmar Hitzfeld following the 2014 World Cup and led the Swiss to the last 16 at Euro 2016. Before that he coached several Swiss clubs, as well as Lazio in Serie A. Born in the former Yugoslavia, he began his playing career with Sarajevo and won the league in 1985. Spent the rest of his playing career in Switzerland. 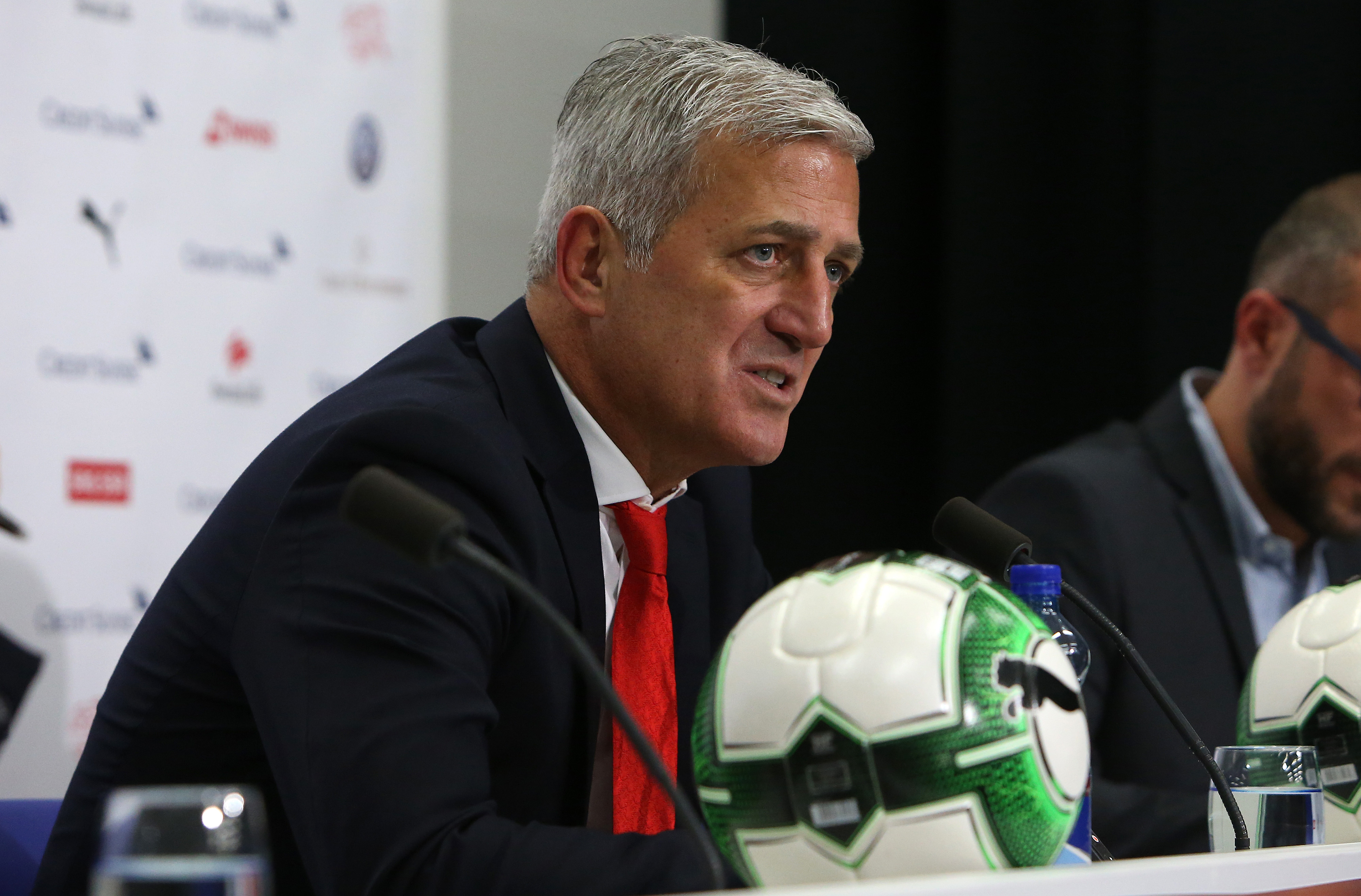 The Players
Star
Xherdan Shaqiri‘s career has not quite lived up to early expectations, but there is always danger when he gets the ball onto his left foot and he is the Swiss player most likely to conjure up something from nothing.
Stalwarts
Yann Sommer has replaced Diego Benaglio in goal. Captain Stephan Lichtsteiner provides an attacking option from right-back, while on the other side Rodriguez is the dead-ball specialist.
Missing
Breel Embolo had to sit out most of the campaign after suffering a serious injury during a Bundesliga match with Schalke in October 2016.
Debuts
Defender Manuel Akanji and midfielders Remo Freuler and Steven Zuber all came into the side. 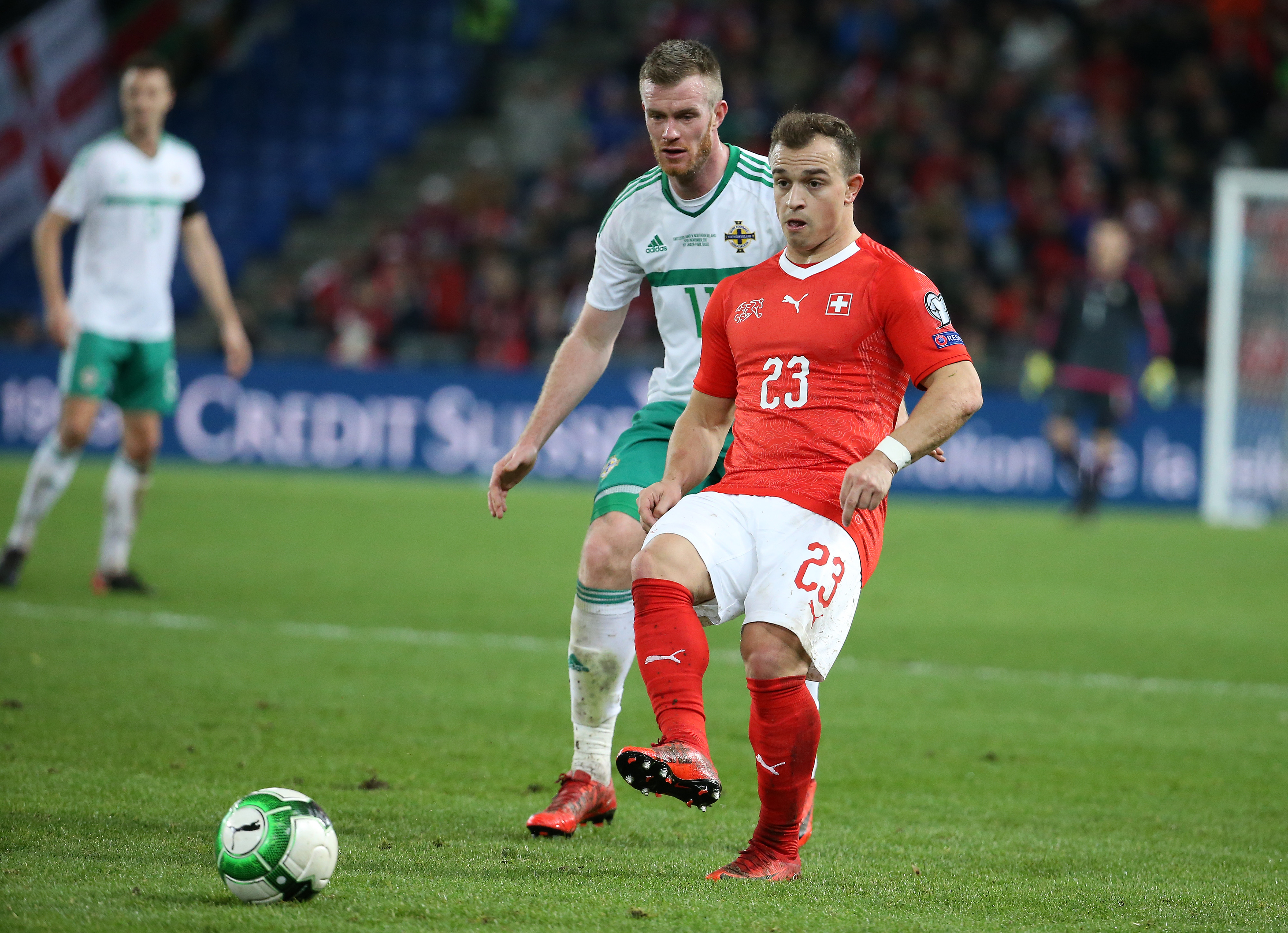 Deliver: Can Shaqiri conjure enough magic to get Switzerland through? (Getty Images)

Who will score the goals?
Haris Seferovic started as the lone striker in all but one of Switzerland’s qualifiers and managed to score four goals. However, his shooting can be erratic at times, and following his performance against Northern Ireland – particularly after he was jeered during the home game – there now appears to be a question mark over his place in the team.

Is Granit Xhaka the real deal?
While Xherdan Shaqiri is the team’s star turn, it is their defensive midfielder who makes them tick. Xhaka pulls the strings in midfield with his passing and his anticipation of dangerous situations, although he is also prone to defensive mistakes and giving the ball away. 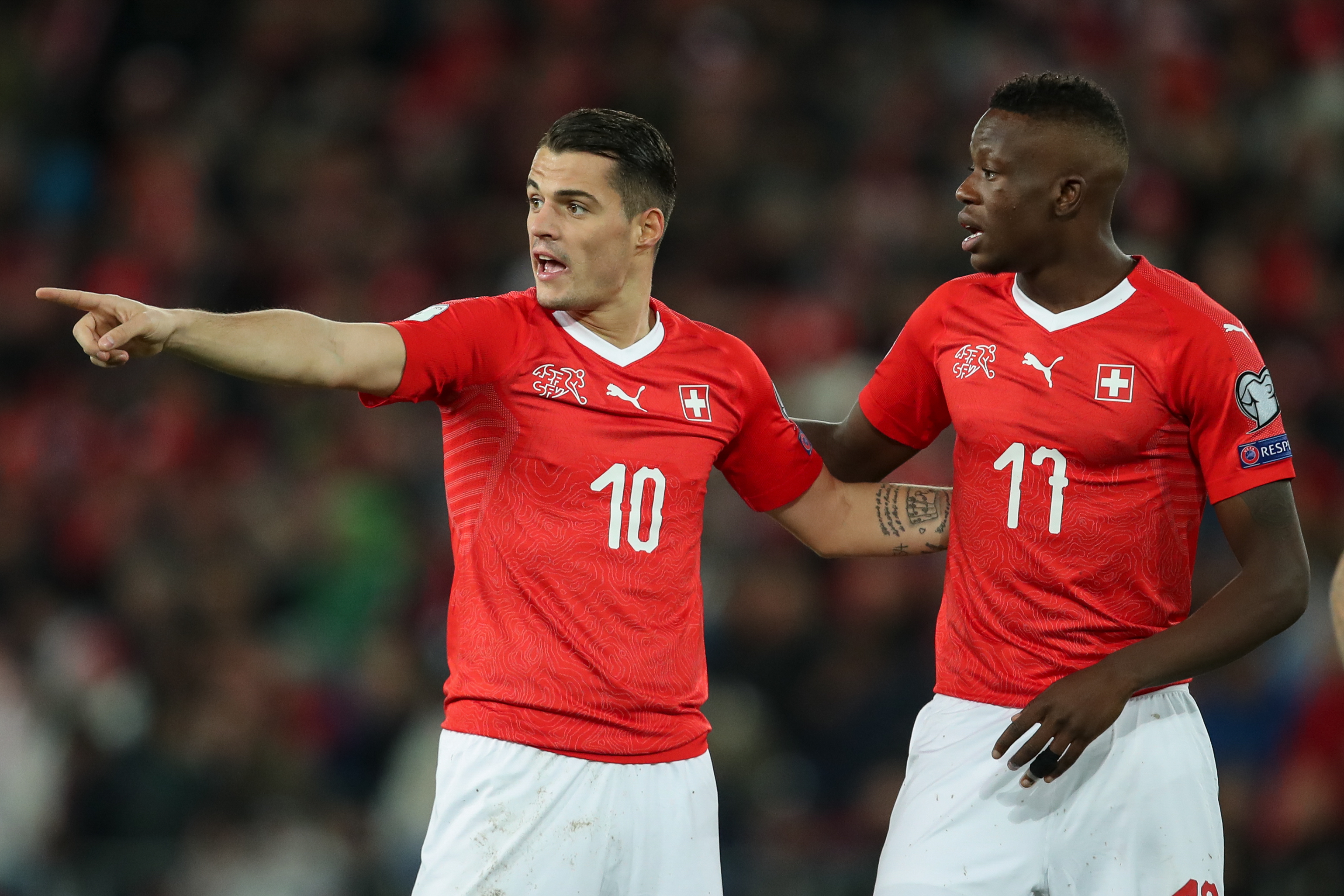 Real Deal: Is Xhaka the real deal in the midfield? (Getty Images)

Who will play alongside Xhaka?
Denis Zakaria was thrown into the two-leg play-off tie against Northern Ireland and made an immediate impression. Switzerland can also call on the veteran Valon Behrami or another relative newcomer Remo Freuler.

Are Switzerland as good as their line-up on paper suggests?
With nearly all of their players based at clubs in Europe’s so-called big five leagues, and in the Bundesliga especially, the Swiss squad looks to be potentially one of the strongest at next year’s World Cup. But when they faced their stiffest test in the qualifiers they were found wanting, beaten comfortably away by Portugal.