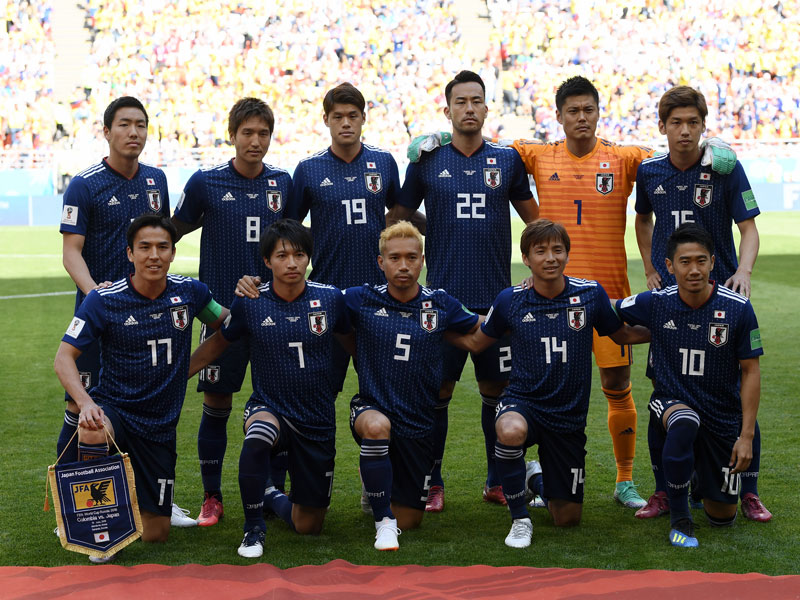 Japan have been eliminated from the 2018 World Cup.

Belgium staged one of the most astonishing comebacks ever seen at a World Cup to recover from 2-0 down to beat Japan 3-2 and set up a quarter-final against Brazil.

Japan surprised Belgium in the first half by pressing high up the pitch and denying the favourites time and space. Fears that Japan might not sustain their level of pressure after the break were blown away in four incredible minutes when Japan twice stunned Belgium.

After Eden Hazard hit a post and Romelu Lukaku headed wide from close range, it looked as if Belgium were heading out. But a double substitution restored the balance to the Belgian midfield in a breathtaking final half-hour, when Marouane Fellaini and Jan Vertonghen both scored.

Despite losing their two-goal lead, Japan pushed for the win until the end, opening themselves up for the counter-attack and Belgium scored with the last move of the game.

There are last-minute winners… then there's this from belgium! pic.twitter.com/UxpmUecal9

The last time a side came from 2-0 down to win in the knockout stages in normal time was West Germany against Hungary in the 1954 Final.

Japan lost their final group game to Poland and scraped into the knockout stages by the slimmest of margins, edging out Senegal by virtue of having collected fewer yellow cards.

A draw would been enough for Japan to qualify but Poland, bolstered by centre-back Kamil Glik’s return to the starting line-up, were a much stronger prospect than in their first two games.

Eiji Kawashima produced a brilliant save to palm away Kamil Grosicki’s header from the line but he was powerless to prevent Jan Bednarek volleying home from close range for the game’s only goal.

Japan coach made six changes to his starting line-up and the alterations upset the balance of the team.

Japan and Senegal shared the spoils after a tight contest saw both sides show both their attacking qualities and defensive frailties.

Senegal made a strong start and took the lead through Sadio Mane but their concentration levels dropped and Takeshi Inui equalised.

Japan were the better team in the second half but could not take advantage: Yuya Osako missed an open goal and Inui hit the crossbar. They were punished when Senegal scored a second goal through Moussa Wague but poor goalkeeping allowed Japan to grab a second equaliser

For all the talk of the attacking threat pose by Sadio Mane, Senegal’s best attacks came from their full-backs. Youssouf Sabaly and Moussa Wague combined for Senegal’s second goal, when Wague became the youngest African goalscorer at a World Cup.

In their opening game Japan face Colombia in one of three games on the 19th of June. Match preview here.

Japan won their first World Cup match on European soil and also became the first Asian country to beat a South American nation after Yuya Osako’s second-half header gave them victory over a Colombia side that played the bulk of the game with 10 men following the early expulsion of Carlos Sanchez.

The first red card of the tournament gave Japan the chance to control game after Kagawa converted the penalty. But Colombia were the better side for the first half and equalised through Juan Quintero’s clever free-kick.

Japan made their numerical advantage count after the break when the impressive Takeshi Inui went close and from the resulting corner, Osako headed the winner.

The 3rd-minute sending-off of Carlos Sanchez, who raised his arm to block Kagawa’s follow-up shot after David Ospina had saved the original shot from Yuya Osako. The confusion in the Colombian defence had stemmed from Davidson Sanchez’s failure to clear a routine bouncing ball. 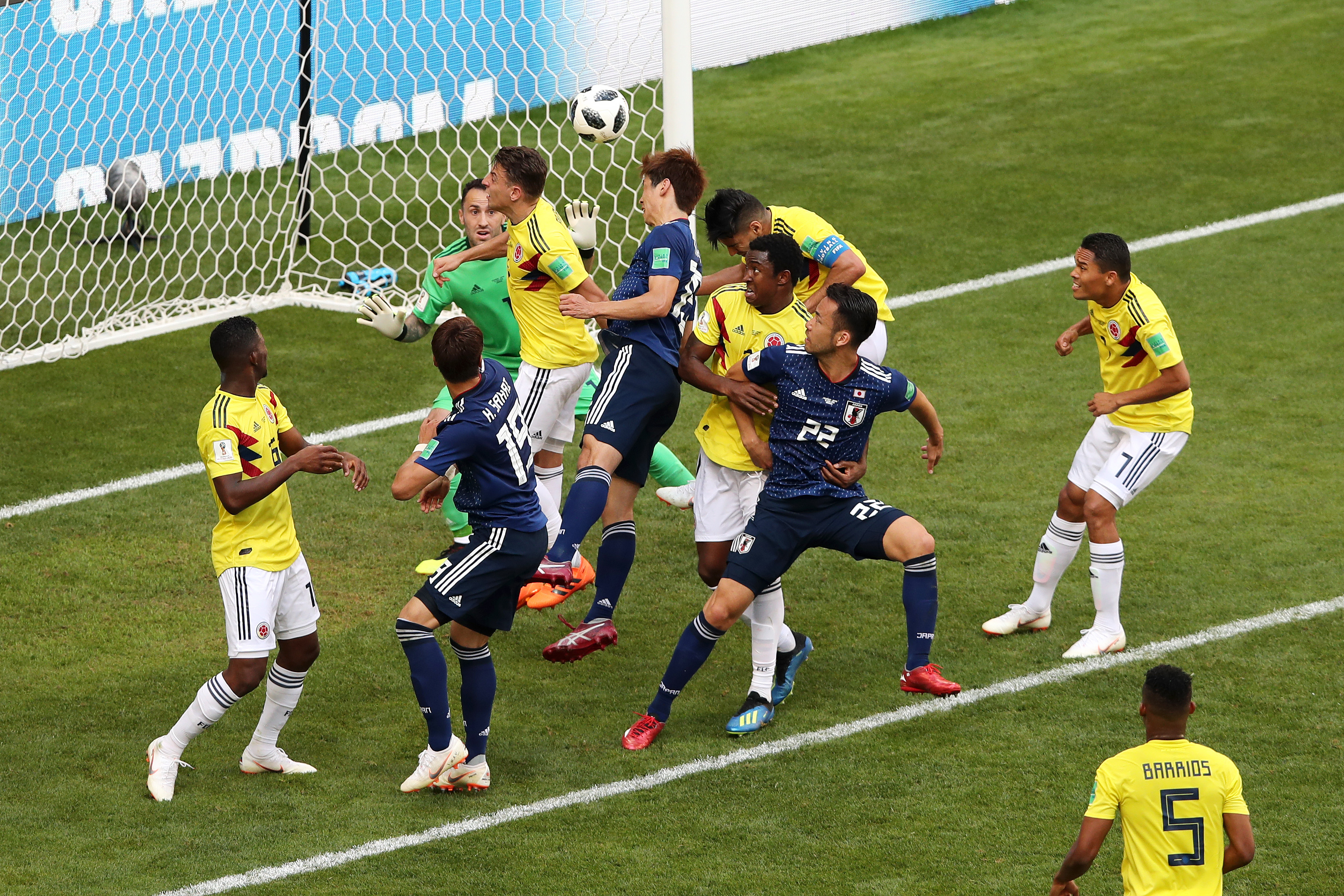 Yuya Osako scored the winner for Japan to secure a 2-1 win. (Getty Images)

James Rodriguez, Colombia’s outstanding player at the 2014 finals, was left out of the starting line-up after failing to fully recover from a hamstring injury. Coach Jose Pekerman preferred to start with Juan Quintero, who scored Colombia’s equalising goal. Instead of playing for the point, Pekerman made positive second-half substitutions, introducing a second forward, Carlos Bacca, and bringing on Rodriguez for Quintero for the final half-hour

Japan qualified automatically for their sixth consecutive World Cup with commanding performances in the games that mattered, but there were also hiccups along the way – such as a home loss to the UAE. After the sacking of coach Vahid Halilhodzic the team is far from settled, with Akira Nishino expected to make changes.

Jun 2015
Japan draw 0-0 at home to Singapore but win every other game in the group after that, keeping clean sheets in each.
Sep 2016
An uphill struggle is in prospect after they lose 2-1 at home to the UAE in their round-three opener.
Nov 2016
A controversial penalty gives Japan the edge shortly before half-time as they beat Saudi Arabia 2-1.
Aug 2017
Yosuke Ideguchi sets up the first and scores in the second to secure automatic qualification in a 2-0 win over Australia – Japan’s first-ever World Cup qualifying victory over their opponents in eight attempts.

Japan are in Group H with Poland, Colombia, and Senegal.

On the 23rd of March Japan played against Mali, and then four days later they lost 2-1 to Ukraine. They then lost to Ghana and Switzerland on the 30th of May and 8th of June respectively. They finally beat Paraguay 4-2 on the 12th.

Japan open their World Cup account against Colombia on the 19th of June. Senegal are five days later, and then Poland are four days after that.

Akira Nishino, age 63 (07.04.55)
Nishino comes in after the recent sacking of former Algeria coach Vahid Halilhodzic. Nishino, a former player, was the technical director of the Japanese soccer association and his appointment comes as a surprise with less than 2 months to go before the World Cup. Association president Kozo Tashima said “This has become an urgent situation. For the new coach, we had no choice but to promote from within the association as the World Cup is only two months away.” Tashima added, “We thought the coach should be someone who has watched this team the most from within the association.” 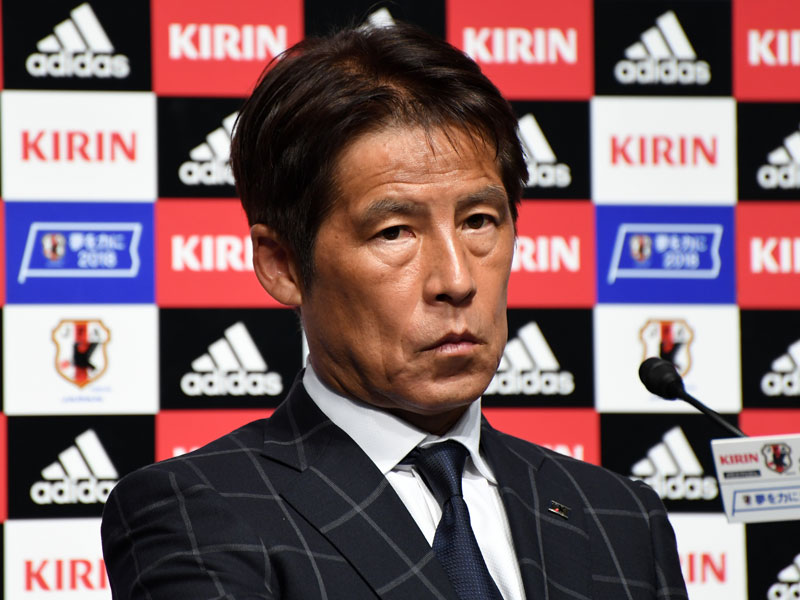 The Players
Stars
Shinji Kagawa, Keisuke Honda, Shinji Okazaki and Yuto Nagatomo should all be in Russia, but their playing time has been sharply reduced.
Stalwarts
Maya Yoshida is a rock at the heart of defence. Hotaru Yamaguchi is now the key holding player in midfield, while Eiji Kawashima is back as the first choice in goal.
Missing
Influential captain Makoto Hasebe was missing for much of 2017 through injury.
Debuts
Youngsters now making their mark include Yuya Kubo, Takuma Asano, Yosuke Ideguchi and Wataru Endo. 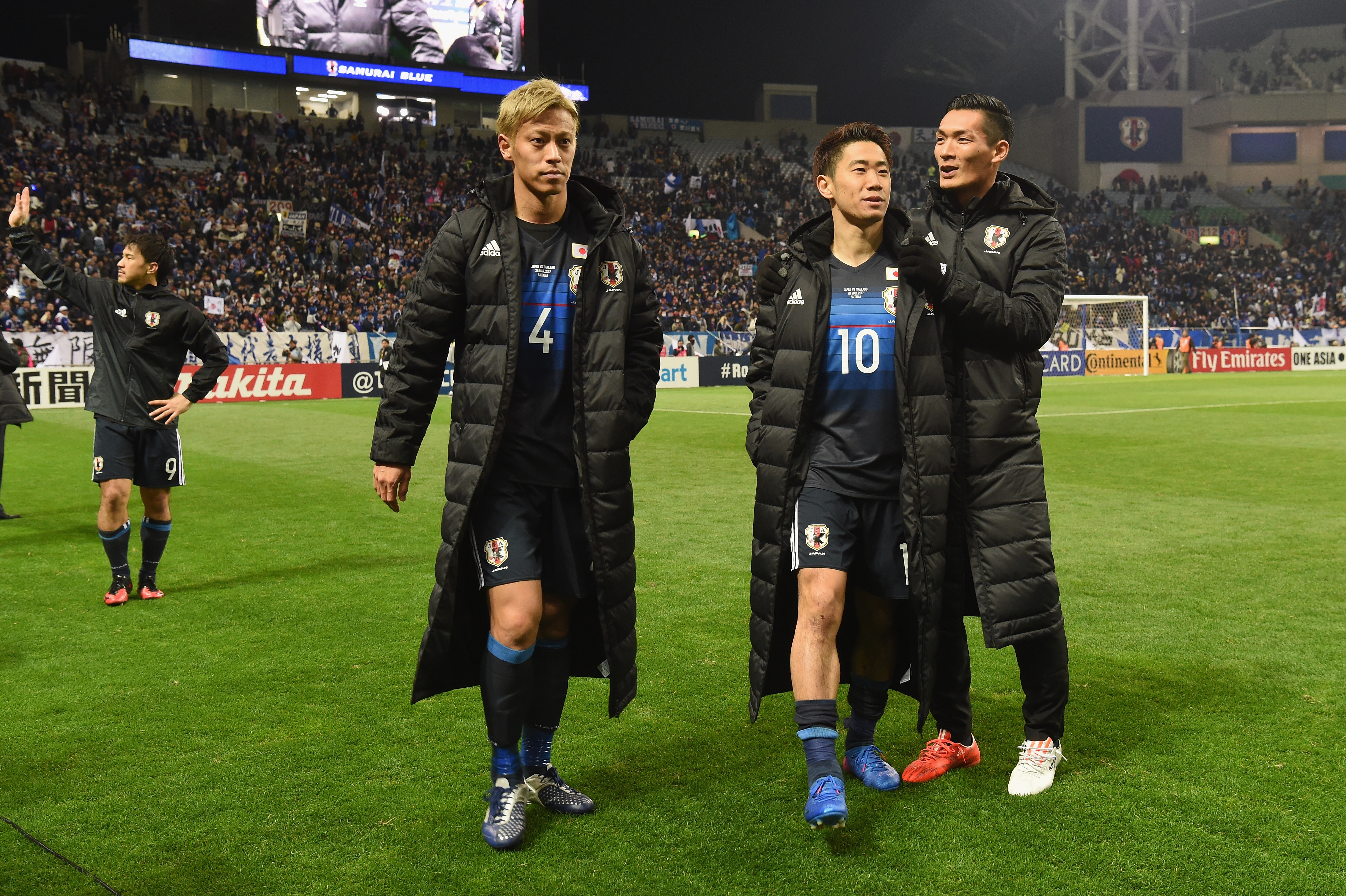 Perform: Okazaki (left), Honda, and Kagawa all have to step up and perform in Russia (Getty Images)

Who are the strikers?
The midfield formation varies but Halilhodzic liked to stick with a three-man front line. It is hard to tell where Nishino will take the team. Yuya Osako is the first-choice centre-forward but all three positions are still up for grabs.

Who will provide the ammunition for the front three?
Makoto Hasebe, if fit, but watch out for new faces here, notably Ideguchi and Shu Kurata – both players also possess superb long-range shots. 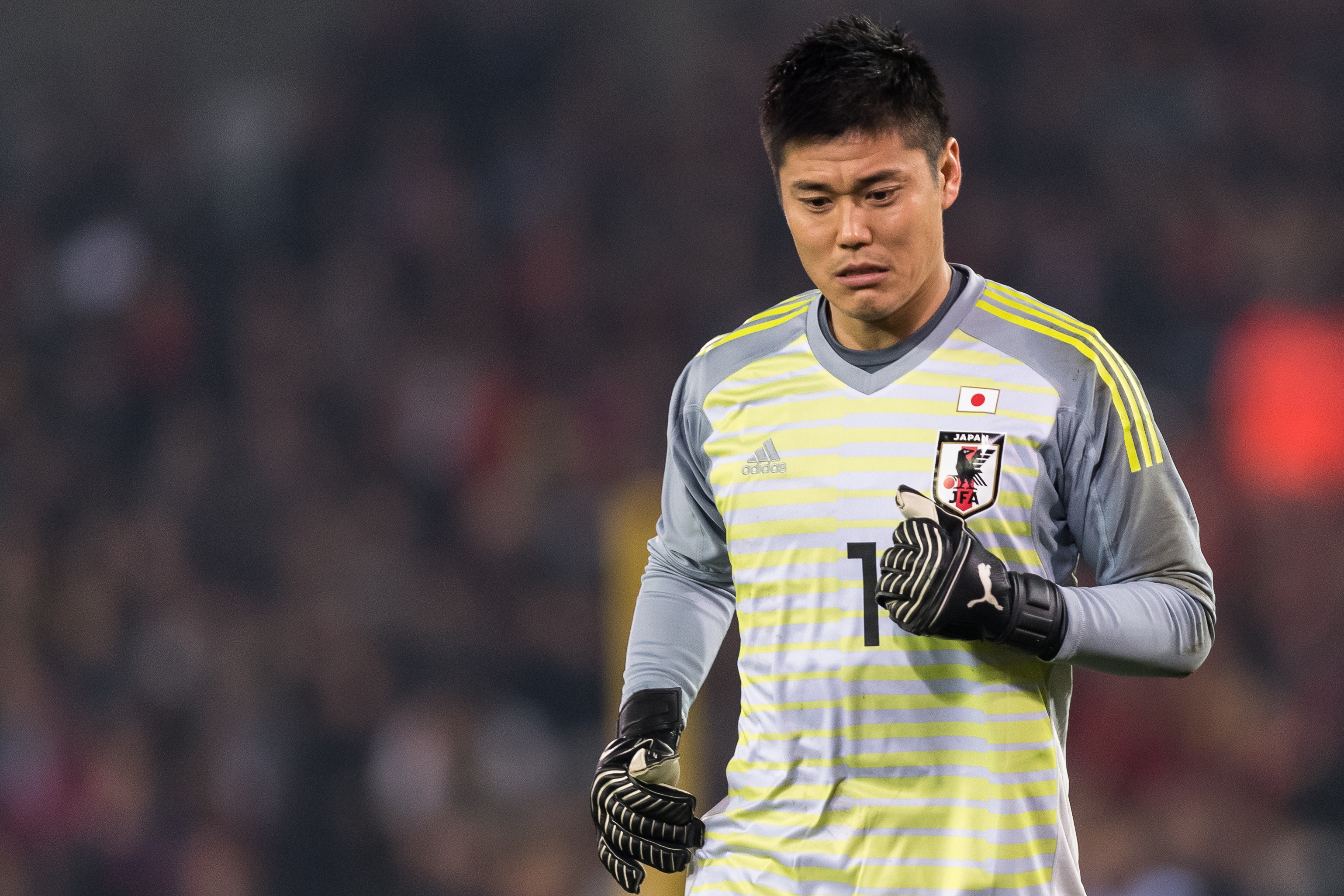 In Goal: Kawashima will likely stat in goal (Getty Images)

Who will keep goal?
Eiji Kawashima was back as first choice in the final qualifiers and Shusaku Nishikawa is now back in the squad.

Can Japan defend?
It’s the same old question that just won’t go away. The organisation is there but there may be just too many covering errors for success at the very top level.