Who Will Be Top Scorer at the World Cup?

Who Will Be Top Scorer at the World Cup?

The 2018 World Cup in Russia is going to bring together the finest players in the world, and some of the finest attacking forces on the planet, together. So we have selected who we think will be the top-scorer for the tournament.

Harry Kane is one of the best strikers in the world and yet has often struggled to replicate his club form onto the international stage. That being said, his World Cup started perfectly with a goal in the first 15 minutes. He then scored the winner for England with a lovely header at the back post.

He then scored a hat-trick against Panama.

Harry Kane then opened the scoring against Colombia from the penalty spot.

Kylian Mbappe scored once during the group stages against Peru, but then put in an unbelievable performance against Argentina, scoring twice. Finally he scored what looks to be the World Cup winning goal against Croatia as the PSG man put France 4-1 up.

We expect France to do well in Russia, but we were torn who to go for between Griezmann and Mbappe. Griezmann was France’s best player at the European Championships in 2016, leading the tournament with six goals too, so clearly he can play on the big stage. Mbappe has not played in a big tournament before, but he looks to be a class act and 2018 could be his tournament.

Griezmann got off the mark with a penalty against Australia.

His second of the tournament was another penalty against Argentina during the round of 16, and his third came against Uruguay as his shot was horribly fumbled by keeper Muslera.

Griezmann scored another penalty in the World Cup final against Croatia to put his side 2-1 up.

GOAL! Griezmann's effort from range is fumbled by Muslera and the ball loops into the Uruguay net! pic.twitter.com/0vgZyB99YE

Denis Cheryshev scored three times during Russia’s group stage round and then picked up another with a stunning goal against Croatia in the quarter finals.

His last shot probably at World Cup glory, Ronaldo is a pure goalscoring machine. He is supposed to be having a down year, but he scored 15 times from nine games during qualifying for the World Cup. For Real Madrid he has found the net with regularity, and scored one of the greatest Champions League goals ever with a bicycle kick against Juventus. In terms of pure goalscoring, there is no one better and he loves the world stage – expect him to score plenty.

Ronaldo currently has four goals after scoring a hat-trick against Spain and then opened the scoring against Morocco.

He could have added to his tally but he missed a penalty against Iran. 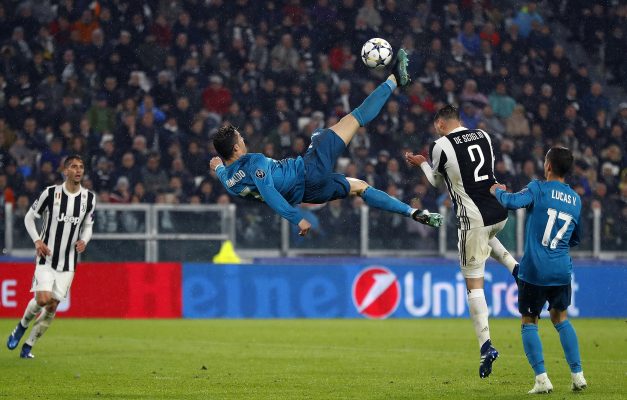 Genius: Supposedly in a down year, Ronaldo can still find the net (Getty Images)

Lukaku, attacking wise, will lead an extremely talented Belgium side in Russia. And his goalscoring ability will probably decide how far they get in the tournament. With players like Eden Hazard, Kevin De Bruyne, and Dries Mertens behind him, he will get chances, the question remains can he finish them? If he does, he will score plenty, if he doesn’t, then Belgium could struggle.

He looks to be on good for, scoring twice against Panama and another two against Tunisia.

Mina playing in the Colombian defence has scored three headers during the 2018 World Cup. His first came against Poland, followed by Senegal and then England.

Then during the round of 16, he scored twice against Portugal.

Costa scored twice against Portugal. He then scored fortuitously against Iran after the defender kicked it into his knee.

Neymar kicked off his goal-scoring campaign with a goal in the 97th minute against Costa Rica and then picked up another against Mexico in the Round of 16.

Coutinho has been Brazil’s best player up to this point scoring an absolute peach against Switzerland (below), and another against Costa Rica.

The big Russian scored one goal against Saudi Arabia and another against Egypt.

After failing to score against lowly Panama, Hazard picked up the scoring slack against Tunisia scoring twice.

Both of Jedinak’s goals came from the penalty spot as he scored one against France and another against Denmark.

His form in 2018 has been truly ridiculous seemingly scoring in every game he played for Liverpool and Egypt. And his Egypt side do not have a difficult group this summer. Alongside the hosts Russia, Saudi Arabia, and Uruguay, they are an outside shot at getting into the knockout stages. Regardless, if he can carry on his form, he will be tough to stop as always.

Salah scored a penalty against Russia and then a deft chip against Saudi Arabia to take his tally to two goals at the World Cup.

Luis Suarez scored the winner against Saudi Arabia and then put his side 1-0 up against Russia in the Group A decider.

Surprisingly, John Stones scored two goals against Panama and both were headers.

Messi is on great form this year, and he is so crucial for Argentina’s chances that it is more than likely he will get on the scoresheet during the tournament. In a tough group alongside, Iceland, Croatia, and Nigeria, Argentina will have to play well, and Messi always rises to the top when necessary.

That being said, he did not have a good game against Iceland taking 11 shots and not scoring with any. He also missed a penalty. He also failed to score against Croatia in a dour display by the Argentinians.

In a match they needed to win, Messi scored a goal to put his side 1-0 up.

He may not be playing up top for Spain, that role will probably go to Diego Costa or Alvaro Morata, but he is unquestionably the creative force for the Spaniards. Given a licence to roam, Isco is just so difficult to defend against, and has the ability to find the net, as shown by his hat-trick against Argentina recently.

Isco played brilliantly against Portugal but did not get on the scoresheet. His thunderbolt off the crossbar was unlucky not to go in. He did open his account against Morocco however. 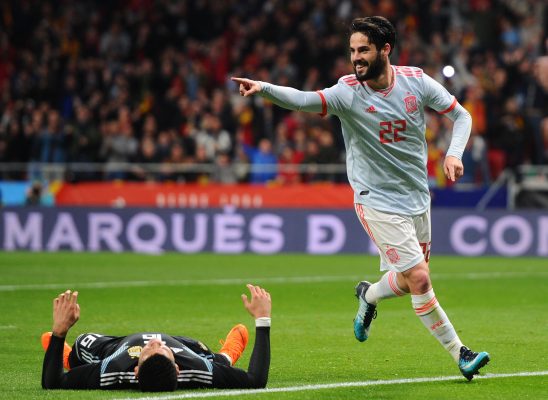 Germany are one of the favourites for the tournament, and with no Miroslav Klose up front, we expect Muller to pick up the goal-scoring flak in Russia. He clearly loves the World Cup too – in 2010, in his first major tournament he scored five goals in six appearances as Germany finished in third. In 2014 he helped guide the side to glory with another five goals, including the first one against Brazil. It wouldn’t be surprising to see him on top of the tree when the tournament is finished. As it turned out, Muller did not score one goal at the tournament with Germany crashing out of the tournament during the group stages. 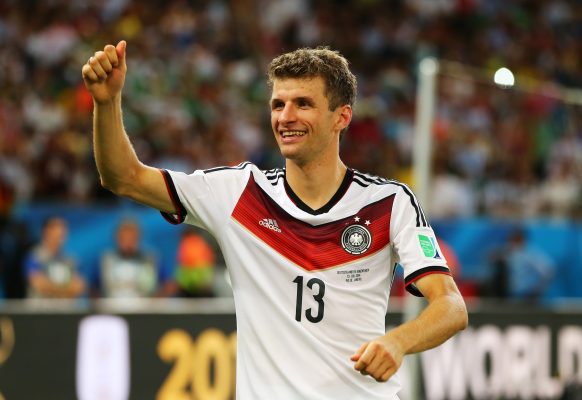 Lead everyone in qualifying with 16 goals, scores all the time for Bayern, but Poland were poor throughout and Lewandowski failed to score. 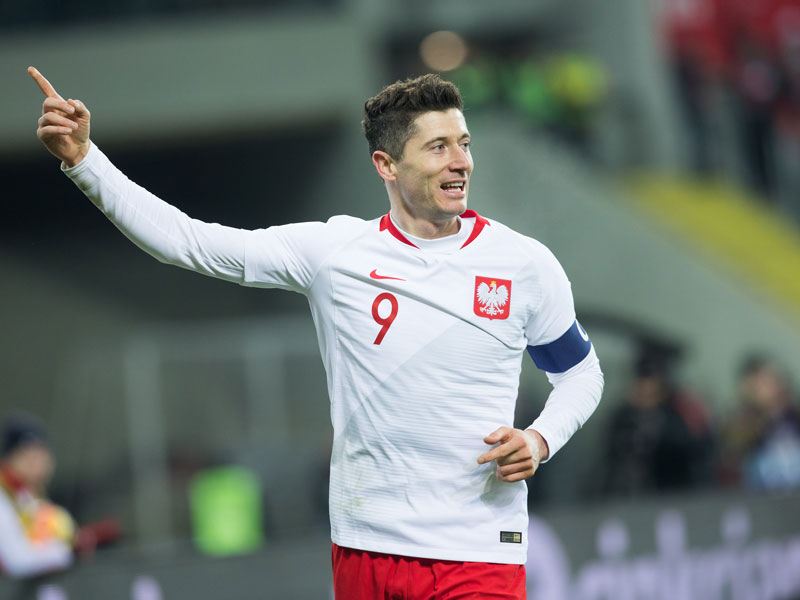 Robert Lewandowski is one of our picks to be top scorer in Russia. (Getty Images)