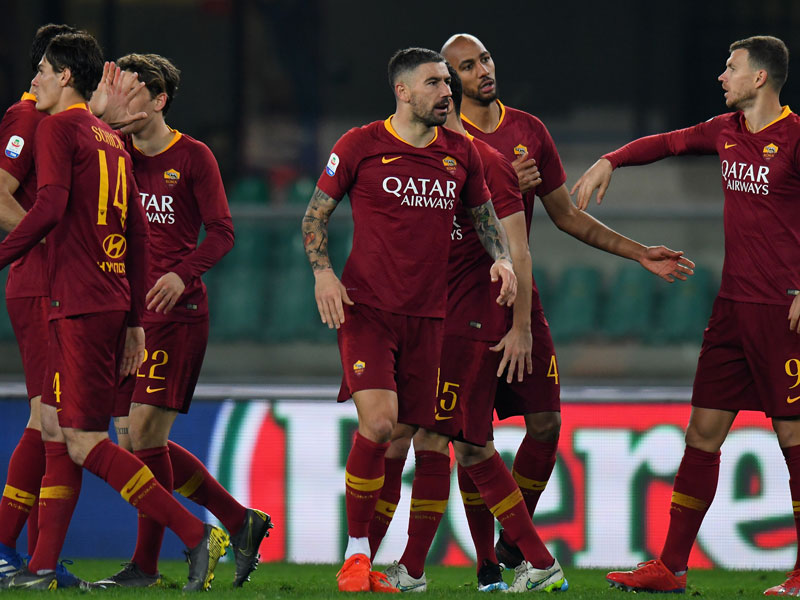 Paddy Agnew’s Notes From Italy: Champions League Returns Which Could Be Good For Roma

The long dark winter nights are getting shorter. This can mean only one thing – that Champions League anthem is about to ring out again at grounds all across Europe, starting tonight at the Olimpico in Rome (Roma v Porto) and at Old Trafford (Manchester United v PSG).

Italian interest obviously will be focussed on the Olimpico where there are good reasons to believe that the home side might be especially glad to hear Tony Britten’s famously bombastic, Handel inspired anthem sound again. The thing is, of course, that last year, against all the odds, Roma went all the way to the semi-finals, knocked out there by subsequently beaten finallists, Liverpool.

That was arguably the best aspect of Roma’s season last year, one in which they finished third in Serie A, fully 18 points behind champions Juventus. Coach Eusebio di Francesco will be hoping that the Champions League stimulus can work again for his side, helping them get their season back on the rails.

Currently sixth in Serie A, fully 25 points behind Juventus, Roma looked to be in serious danger of compromising their season just two weeks ago when they crashed out of the Italian Cup, beaten 7-1 in Florence by Fiorentina. Around these parts, 7-1 tends to be a scoreline which rubs salt in old wounds. Both Manchester United and Bayern Munich in recent and not so recent times have inflicted humiliating 7-1 defeats (the Bayern one was even at the Olimpico) on Roma in Champions League ties.

To some extent, Roma have recovered from the Fiorentina setback, first with a useful 1-1 home draw with AC Milan ten days ago and then with a convincing 3-0 win over Chievo last Friday night. One suspects, however, that this could be a watershed moment in the Roma season. Another setback of the Fiorentina kind could totally undermine already shakey nerves whilst victory here and a subsequent run into the quarter finals would not only greatly boost confidence, it would also, of course, earn Roma an estimated €15 million euro in box-office takings and UEFA bonuses.

As he comes into this game, Di Francesco has to deal with the usual problems presented both by mid-season injuries and by ever fickle sections of the Roma fans. Turkish striker Cengiz Under and Czech striker Patrik Schick are both ruled out, whilst Swedish goalkeeper Robin Olsen is doubtful.

35-year-old Antonio Mirante, who has kept goal for Juventus (in Serie B), Sampdoria, Parma and Bologna, provides plenty of experienced cover in goal. Up front, Bosnian Edin Dzeko, Italian international Stephan El Shaarawy and seasonal revelation, 19-year-old Nicola Zaniolo will provide the firepower, in the absence of Under and Schick.

Watching the game will be Italy coach, Roberto Mancini. One suspects the he will have a particular eye out for Zaniolo. Remember this is the player who Mancini last autumn called into the Italian squad at a time when he had yet to play in Serie A.

Since then, Mancini’s surprise call-up has looked an inspired choice as the 6ft 2in youngster has played his way into the Roma first team, in a number of different attacking or midfield roles. Already, market speculation suggests Zaniolo has attracted the attention of Juventus, Chelsea and Real Madrid, so perhaps more observers than just Mancini will be watching closely tonight.

Di Francesco’s fan problems concern arguably the most significant player in his team, namely Serbian left back Aleksander Kolarov. Last November Kolarov hardly endeared himself to the Roma fans when he said that fans “should realise that they don’t understand much about football”, adding that “here in Rome, they talk a lot but it is just a waste of breath”.

Even if one understands Kolarov’s exasperation with the often overbearing weight of media comment heaped on a side like Roma, those words were always likely to cause him problems. Even when he bowed to the fans by way of a peace gesture, after he had scored a splendid goal against Chievo last Friday, the Roma “ultras” were wary.

So much so that Di Francesco opened up his pre-match press conference  with a warm defence of his talented left back. Calling him a “great professional”, Di Francesco recalled to everyone that, when it was necessary, Kolarov played for a month, despite a broken bone in his foot, adding:

At 33 years of age, former Lazio and Man City player, Kolarov is clearly a key element in this side. If, however, there is an even more important player in the squad, it just might be the team captain, 35-year-old Daniele De Rossi, who has just returned to the side.

These days, De Rossi’s right knee tends to be of the porcelain variety but he soldiers on. Against the Portuguese league leaders, a side that last lost a game (to Benfica) on October 7th, his presence and experience  will be fundamental. However, De Rossi himself said on Monday:

“In games like this, experience can of course make the difference but Porto, too, are used to playing matches like this. We cannot be thinking about our good run last year, this is a different story”.

For his part, coach Di Francesco has no illusions about the importance of the game and the moment, saying:

“This is our chance to play really well and regenerate a bit of enthusiasm. Porto are a tough team…from the physical viewpoint this will be a gruelling game…but we are both proud and ambitious”.